Bed Bath and Beyond Inc. (BBBY) was reviewed back in April and the charts were not encouraging. I wrote that, "BBBY shows no signs of bottoming. Further declines to the $14-$13 area seem likely in the weeks ahead. The $20-$25 area should now act as overhead resistance if BBBY tried to rally."

In the past three months BBBY fell to $16.52 - in May - not as bearish as my forecast. Prices have recently rallied into the $20-$22 area and failed at the declining 200-day moving average line.

Is there any improvement in the charts and indicators? Let's go shopping with some updated charts.

In this daily bar chart of BBBY, below, we can see some interesting new technical developments. Prices rallied above the bottoming 50-day moving average line in early June and tested the line in late June and yesterday.

A rally above $21 will put BBBY back above the 200-day moving average line and bring us closer to a potential golden cross of the 50-day and 200-day average lines.

Since April the On-Balance-Volume (OBV) line has risen suggesting that buyers of BBBY have become more aggressive.

The 12-day price momentum indicator in the lower panel shows a bullish divergence. Prices gapped lower in September and momentum made a low. Prices made a gap down and a lower low in April but momentum made a higher low. This difference is called a divergence and tells us that the pace of the decline has slowed and this can foreshadow a reversal at times.

In this weekly bar chart of BBBY, below, we can see a long decline for this stock. In June and July BBBY has been testing the declining 40-week moving average line.

The weekly OBV line is still pointed down but there is a bullish divergence of the 12-week momentum study versus the price action.

In this Point and Figure chart of BBBY, below, we can see both the long decline and a possible upside price target of $25.50. 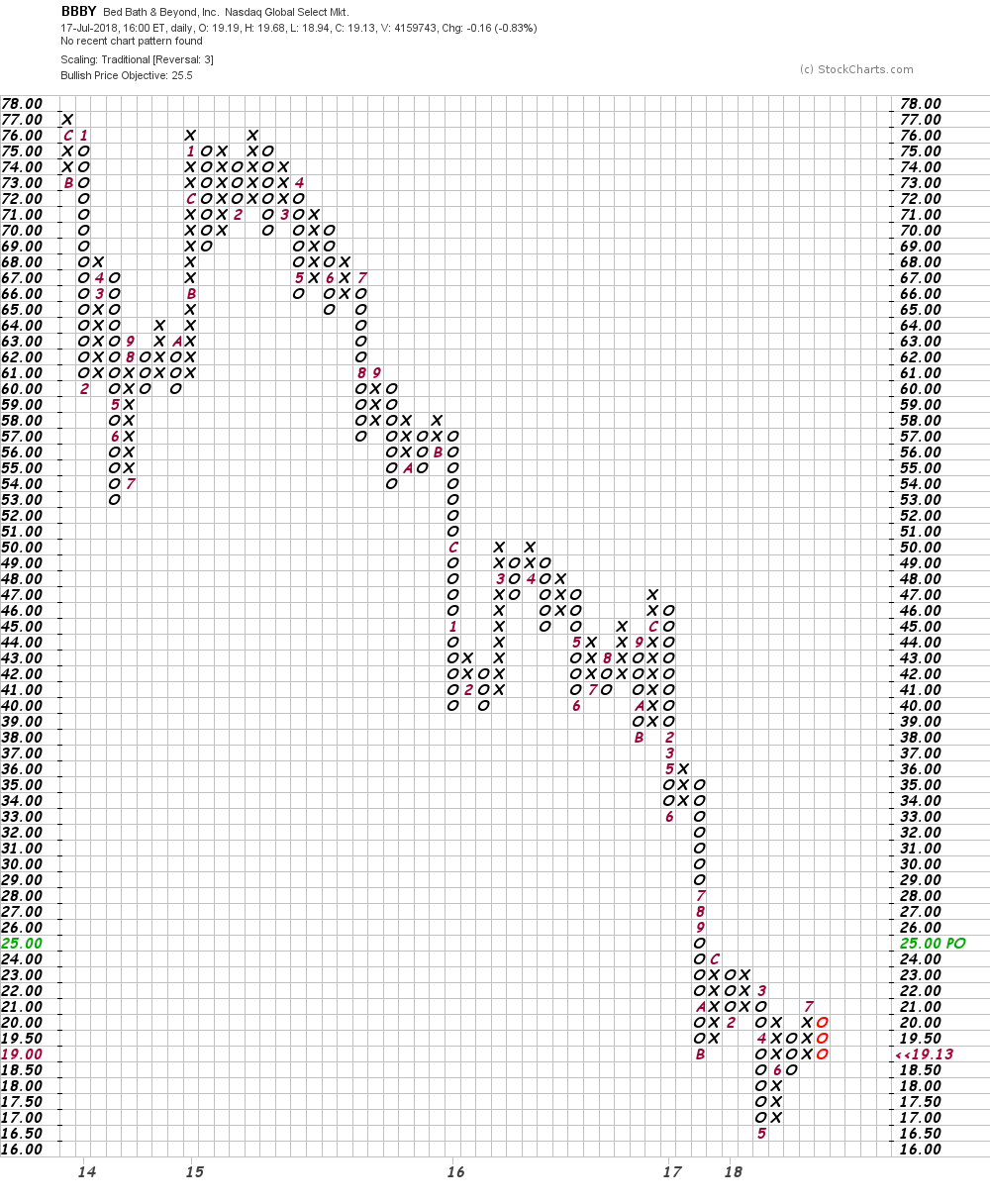 Bottom line: After a long and painful decline it now looks like BBBY is establishing a base pattern. Risking to $17, patient investors and traders could probe the long side of BBBY at current levels and on strength. A rally to $26 will make the charts look a lot more positive.

Get an email alert each time I write an article for Real Money. Click the "+Follow" next to my byline to this article.
TAGS: Investing | U.S. Equity | Consumer Discretionary | Mad Money | E-Commerce | Stocks