The share price of Guess? (GES) has been showing signs of stabilization the past four to five months. Prices are above the rising 50-day moving average line and the line has been successfully tested a number of times over the past six weeks. Prices are trying to hold above the declining 200-day moving average line but further sideways price action and potential base building are probably the most likely course in the months ahead.

Let's visit with the charts and indicators to see if there is a trading opportunity in the near future.

In this daily bar chart of GES, above, we can see how the lagging 50-day and 200-day moving average signals have performed over the past year. The 200-day average probably has performed better in identifying the major downtrend. Since the spike volume day in March, GES has been improving. Prices made a lower low in May but the amount of volume was less than in March, so I would view this as a positive sign that selling pressure was abating.

The daily On-Balance-Volume (OBV) line did make a new low in May but this was not sustained and the OBV line has improved, signaling more aggressive buying. The 12-day momentum study shows a bearish divergence as prices made higher highs and momentum made lower highs in June and July. When the pace of price gains slows, it can be a heads-up to a price reversal.

In this weekly bar chart of GES, above, we can see the slope of the 40-week moving average line has been bearish since April 2016. Prices have made a couple of closes above the moving average line, but seeing the slope of the line turning positive will be more constructive technically. The weekly OBV line has been moving sideways since March after declining from September 2015. A sideways or neutral OBV line suggests that prices have reached a level where buyers and sellers are more in balance. The weekly Moving Average Convergence Divergence (MACD) oscillator gave a cover-shorts buy signal in May and is on track to reach the zero line and a possible outright go-long signal. 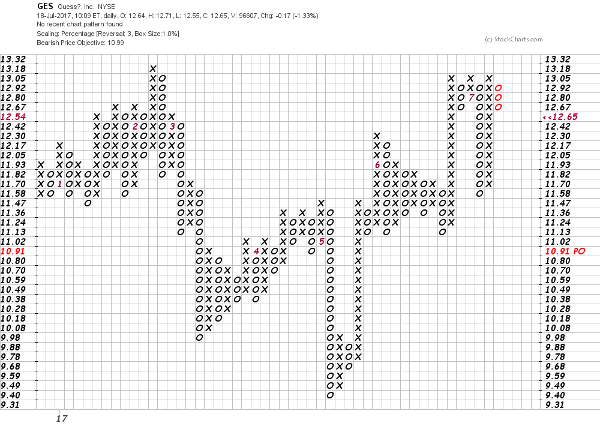 In this Point and Figure chart of GES, above, we can see both a longer-term sideways trend and a shorter-term uptrend. The price movement from late June gives us a bearish price target of $10.91 and would just be part of the base pattern.

Bottom line: It is looking like GES can bottom and I would look for a $10.50 to $13.50 trading range. Investors should be patient as GES appears to be early in this shift from down to sideways.