Many believe that nothing says summer fun more than grabbing your HOG for a cool ride, or a cool investment opportunity. However, these are two very different questions. While it may be always a good time for a ride, it's not always a good time to invest capital. Let's use our objective DSE (decision support engine) to explore the differences between good and bad times to invest in in Harley-Davidson (HOG) .

Nearly a year ago, DSE's analysis allowed us to warn on these pages that July 2016 was not the time to deploy capital in Harley-Davidson. Further, as you can review here, the forecast concluded that the $55 +/-$3 zone should be used to exit any further strength, and prepare for a slide into the low $40s. HOG only slid to the high $40s, before rising to the low $60s, but has since reversed again in more dynamic fashion.

Notice it peaked right in between DSE's two pink ovals, which members of our live-market Trading Room and DSE Alerts services have been using to trade against ever since (click here for a 10-day free trial of our premium memberships). Now, the deeper forecast has been triggered, as DSE members were notified of earlier this week, with $30 +/-$4 as the support zone that should be probed in the coming five to 13 months.

The chart below is the updated version of the exact one from a year ago, and shows the newest trigger causing an even deeper price projection. First of all, the stochastics peaked at the 90% extreme overbought threshold, putting HOG on an initial sell signal. Then, the test of $62 was strongly rejected by the upper two-standard deviation band (olive/gold line), which controls 95% of normality. Individually, these are bright red warning flags, and combined, raises confidence in their potential voracity.

When we add DSE's historical chart pattern recognition algorithms to the recipe, we see the yellow box highlighting the rise off the early 2016 low is only a corrective pattern, which implies a lower low than the $35 level seen back then. Now, we have three independent, objective methods of assessing risk vs. reward, with all three warning that buying and/or holding these shares here has much more risk than reward.

Specifically, from here, there is around 20 points of further decline potential, with only around 10 more points of reward. That 10 points would be giving an extraordinarily overbalanced benefit of doubt to the bulls, which is never the optimal stance once the three analysis methods mentioned above all give independent sell signals. 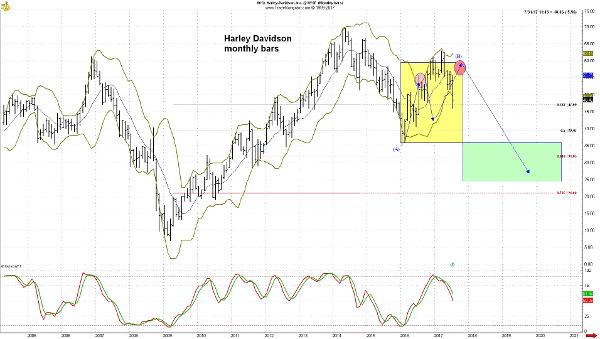 Therefore, the DSE warns strongly, after the past few months of decline, that if long this name, and wishing you'd had sold in the mid-$50s, to use any bounce in the coming weeks back toward $56 +/-$1 to exit, even if you have to take a loss.

If flat, $55 +/-$3 should be used to establish short exposure. If already short, maintain positions and add into resistance just mentioned. Otherwise, buckle up for what could be a very scary September through next June, as price downshifts to the green zone.

For updates on this analysis, as well as other trading opportunities, try Ken Goldberg's DSE Alerts service for free for a couple of weeks, or contact him at support@dsetrading.