Ross Stories, Inc. (ROST) was last discussed at the end of June and we weren't optimistic. We concluded, "ROST now looks extended on the downside so a rebound could develop but I would anticipate further losses whenever this bounce runs its course."

With the benefit of hindsight we can see that ROST did bounce in late June and headed still lower in July. The down move since early June has gotten steep but we have yet to see signs of capitulation (a.k.a. throwing in the towel) or exhaustion so further declines are likely.

Let's drill down on the latest charts and indicators to see what sort of upside and downside parameters we may be looking at in the weeks ahead.

In this daily bar chart of ROST, above, we can see a peak in November and a slight lower higher in February after which the downtrend gained speed. Volume has been heavier since the middle of May but not at a level I would consider a climax. The slopes of both the 50-day moving average line and the 200-day moving average lines are bearish. The daily On-Balance-Volume (OBV) has been zig-zagging lower since mid-May with heavier volume being done on days when ROST has closed lower. Heavier volume on a down day is a sign of aggressive selling.

Momentum in the lower panel is showing a pattern from June of higher lows compared to lower price lows. This difference is a bullish divergence and tells us that the pace of the selloff has slowed. A bullish divergence can sometimes foreshadow a price recovery but it doesn't always work.

This weekly bar chart of ROST, above, is aligned with the bear case. Prices are below the declining 40-week moving average line. The weekly OBV line is weak and pointed lower and the Moving Average Convergence Divergence (MACD) oscillator is in a bearish or sell mode below the zero line. 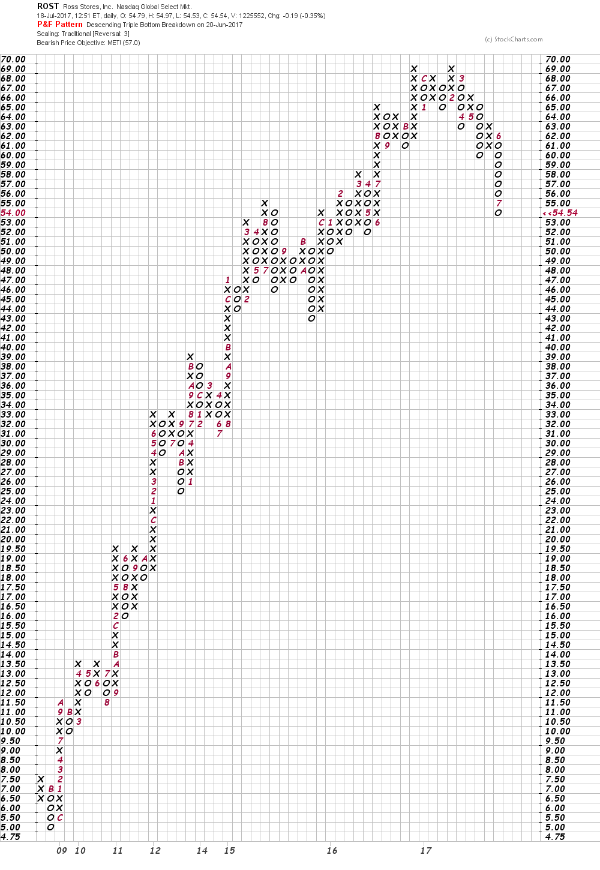 In this Point and Figure chart of ROST, above, we can see that the uptrend from the 2009 low was broken. The trade down to $59 set in motion a deeper decline. Though there is support in the upper $40s on this chart, further declines are possible.

Bottom line: The path of least resistance for ROST appears to be down. Prices are extended on the downside but without a selling climax or stabilization I would be prepared for further losses.