Raytheon Co. (RTN) has been correcting its strong gains from 2015 the past three months. At any given point in time a stock chart can show bullish and bearish signals on various time frames and that is what I see on RTN right now. Let's drill down a bit more and see if we can deduce a sensible technical strategy at this juncture for this Action Alerts PLUS holding.

In the daily bar chart of RTN, below, we can see a mixed picture with our favorite set of indicators. The stock is below the declining/flattening 50-day simple moving average line. RTN broke below and closed below the flat 200-day moving average line in June but has just rallied back to this longer-term trend indicator. A close above $205 would put RTN back above both average lines.

The daily On-Balance-Volume (OBV) shows a top in May/June and weakness the past six or seven weeks. A weak OBV line tells us that sellers have been more aggressive but seven weeks is not a long period of time compared to the many months that the OBV has risen.

The daily Moving Average Convergence Divergence (MACD) oscillator crossed to the upside earlier this month to a cover shorts buy signal. The MACD oscillator is well below the zero line so an outright go long signal is likely to be a ways off.

In the weekly bar chart of RTN, below, we can see the strong rally noted above. Prices closed below the rising 40-week moving average line but have recently rallied back to the underside of the flattening average line. The weekly OBV line has been stalled the past three to four months, suggesting a balance between aggressive selling and aggressive buying.

The weekly MACD oscillator has begun to narrow within a take profits trend so we could see a new buy signal in the weeks ahead.

In this Point and Figure chart of RTN, below, we can see a distribution pattern (selling) and a possible downside price target of $165. A rally to $212 would strengthen this chart. 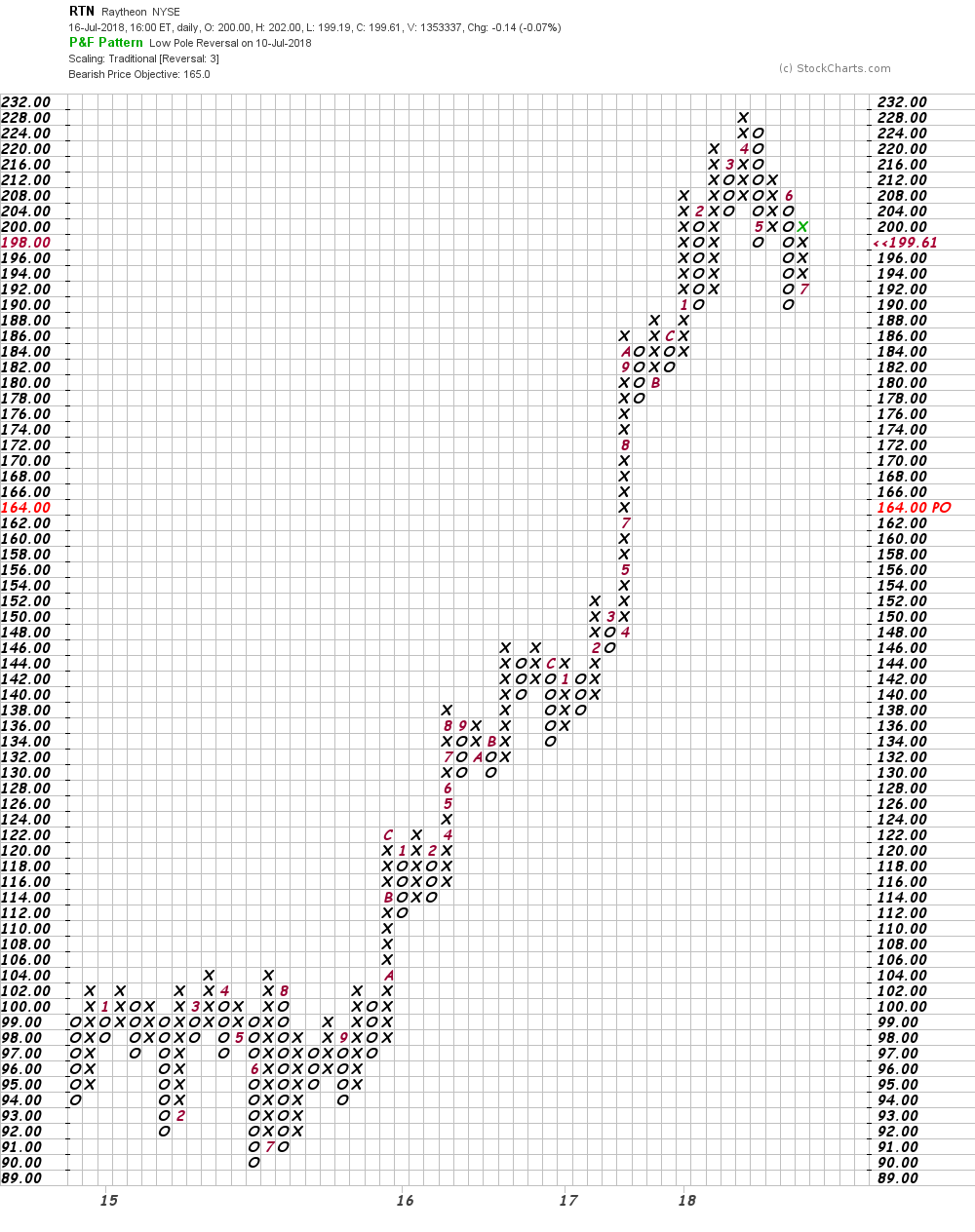 Bottom line: RTN made a big rally from its 2015 base pattern. A three-month correction down to support in the $190-$180 area shows only some light selling in June looking at the OBV line so RTN may not have that much more downside though the Point and Figure chart suggests otherwise. More sideways price action bounded by $190 on the downside and maybe $220 on the upside is what I would anticipate for now. Experienced traders could trade the range.

Cramer and the AAP team are looking at how Raytheon benefits from Lockheed Martin's (LMT)  F-35 deal. Find out what they're telling their investment club members and get in on the conversation with a free trial subscription to Action Alerts PLUS.

Get an email alert each time I write an article for Real Money. Click the "+Follow" next to my byline to this article.
TAGS: Investing | U.S. Equity | Transportation | Industrials | Jim Cramer | Mad Money

Here's how low the stock could go.

Chemical Maker LSB Industries Gets an Upgrade: Here's How to Trade It

Let's check the charts for the 'right mix.'

The Path for UiPath Could Be Headed Toward Single Digits

The shares are plunging after reduced guidance.

Put this one on your 'market minder' to watch.

3M Seems Glued to the Lows

Shares of MMM are getting stuck, according to the charts.