Talk about the thrill of victory... and the agony of defeat. I can still see that skier from the opening clip of ABC's "Wide World of Sports." Did you folks happen to catch the action across the banking space in response to Bank of America (BAC) earnings? (I know you did.) BAC soared more than 4% on the day in response to solid quarterly earnings that topped expectations. Something different happened this time, though. The entire group came with them. JP Morgan (JPM) reported an excellent quarter on Friday, literally line by line. Citigroup (C) , while missing on the revenue side, at least showed a dramatically lower tax rate... and we all know of their plans to return dough to shareholders. That's the reason why I'm in that space. Both firms ran more than 3% on Monday. Thanks BAC. Even problem child Wells Fargo (WFC) performed well in Monday trading. Now comes Goldman Sachs (GS) . These guys either show me some improvement on the trading side, or my patience with them will likely be very short. New CEO or not.

I've dangled from a few helicopters in my time. Know what? I have never bungee jumped. I just don't see any advantage in relinquishing all control, and then trusting a cord not to snap when stressed. At least upon small team insertion, you control speed and location. Investors in Netflix (NFLX) probably felt a bit like how a bungee jumper must feel on the way down last night. I mean, we've seen it all before with this name, and with other FANG-like stocks. The knee jerk after the earnings are released. Sometimes the snap back. Sometimes not.

If you watched Columnist Conversations last night, you saw my trades in the name. As I had told you in this column Monday morning, I would not be playing this one large. My instinct told me in the way that they came for Netflix from 3 p.m. on, that the post-closing bell reaction would be negative. I got myself short the stock at $400.25 -- seconds prior to the closing bell. A few minutes later, I had already covered the trade... at $360. Could have bought them cheaper. That's not what the sport is all about though. This sport is about booking a profit. Move on to the next thing. Or not.

Part of the problem with stocks that trade at extreme valuations is that once they become profitable, they start moving toward becoming normal. The pie in the sky begins to erode. Netflix truly shows tremendous progress through spectacular execution. The firm showed excellent year-over-year revenue growth (+40%). That revenue was just less then Wall Street expected. Unfortunately, so was subscriber growth.

The firm was then also forced to guide third-quarter industry expectations lower for both metrics, as well. The tremendous expense associated with putting together high quality entertainment will pressure margins moving forward (in my opinion), as will competition. The streaming world is not going to become less crowded anytime soon. Oh look. Here comes Disney (DIS) .

The $340 support level should be somewhat significant if that spot were to be visited this morning. Even there, which would be a 15% decline from yesterday's close, investors still have close to a 75% return year to date. Can't gripe about that.

Before anyone pats me on the back for the Netflix trade, I am also long both Amazon (AMZN) , and Alphabet (GOOGL) . Those positions are longer term, not short-term rentals for me like NFLX was. Now, those two -- though lumped together in NFLX-associated selling -- are in fact very different beasts entirely.

Amazon is also an overly valued name, currently trading at 90x forward-looking earnings and something like 230x trailing earnings. You may recall that several months ago, I placed an $1850 price target on AMZN. The high yesterday was $1841.95. Perhaps I should have jumped the gun, taken my ball and gone home. After all, the negativity was not the only thing that impacted AMZN on Monday. The firm's highly promoted "Prime Day" got off to a very embarrassing start that made the website unavailable to many shoppers. This will undoubtedly hurt the metrics that support performance success.

On top of that comes news that Amazon's key retailing rival Walmart (WMT) , and key cloud services rival Microsoft (MSFT) have decided to dance to the next song (five years) together. Walmart will rely upon Microsoft for machine learning, artificial intelligence, and sales data sharing with vendors. If you have not yet caught on, Microsoft's "Azure" is considered a significant alternative to Amazon Web Services, particularly across the retail space, as that group plays catch up to Amazon's expertise in, and broad use of, data. 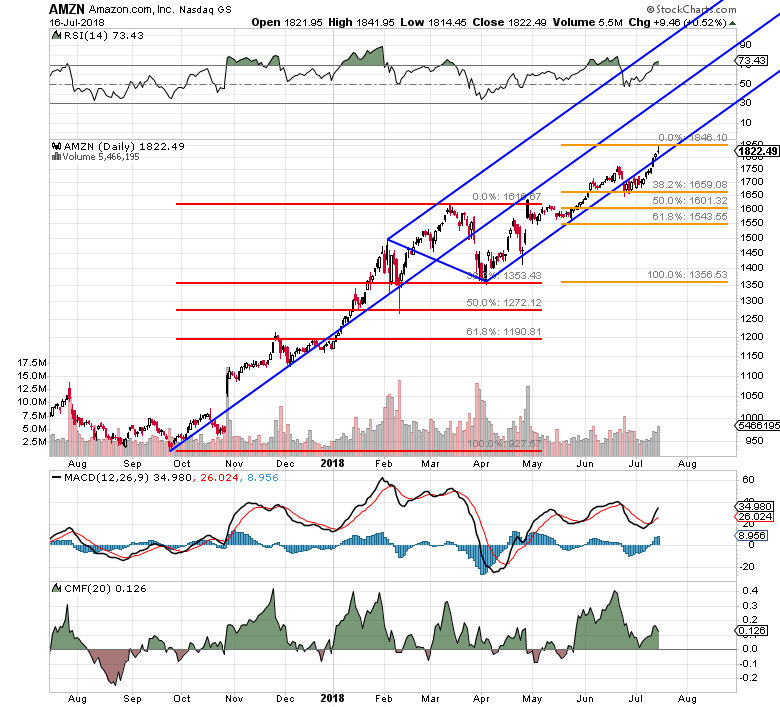 In my opinion, though seemingly over-valued and having to overcome that troubled start to "Prime Day," Amazon is skating on thicker ice than was NFLX. Money Flow, the daily MACD and Relative Strength all look good. You may see some weakness. Many of you have much lower basis points, and I get that it can be tough to add at levels that increase one's average cost. I would need to see a serious setback for this name to increase my long. My new plan:

Think the FANGS are all overvalued? Think again. I mean they are not all dirt cheap, but one can certainly not put them all in the same basket. Alphabet (GOOGL) trades at 25x forward earnings, has more than $100 billion in cash on hand versus just $5 billion or so in total debt. On top of that, the firm can boast more than $20 billion in levered free cash flow just over the trailing twelve months. These guys can weather just about any storm. Even an unfriendly European Union.

How about Facebook (FB) ? This firm is "cheapish" too at 22x next year's earnings. This firm, like GOOGL, also sports healthy free cash flows. Did you read Stephen Ju of Credit Suisse yesterday? Ju thinks that Instagram is undervalued within the Facebook empire, and that spending on advertising on Instagram as a percentage of Facebook will rise to 20% from 15% late last year. Ju slapped an outperform rating on FB and increased his price target from $240 to $265.

What I think is obvious here, is that despite the very public problems around privacy that ended with the hooded wonder appearing before our legislators, this name found fan support where it should have -- if remaining on trend were to be realistic. This chart clearly supports a thesis for Stephen Ju's price target. Should there be weakness this week associated with the NFLX results, or a broader undeserved selloff of the FANG names, I think I consider this one for initiation in the $198 to $200 range.