The Goldman Sachs Group, Inc. (GS) is getting plenty of media attention this morning with the announcement of David Solomon becoming the new CEO on October 1, plus their Q2 2018 earnings. Lots of news for reporters to run with, some of which has been anticipated already.

As a technical analyst I pay a little attention to the news - basically to see how a stock reacts to the news rather than the new itself. GS showed a bearish trend from March to early July but has improved the past two weeks. Let's drill down to see if prices can strengthen further.

In this daily bar chart of GS, below, we can see that prices have rallied to the underside of the still declining 50-day simple moving average line. The longer-to-react 200-day moving average line has peaked and is slowly rolling over.

The daily On-Balance-Volume (OBV) line shows a decline from April to last June signaling more aggressive selling. In recent weeks the OBV line has been steady.

In the lower panel is the 12-day momentum study which shows higher lows from late March to early July, while prices make lower lows. This difference is a bullish divergence because the pace of the decline from March has slowed and it can sometimes foreshadow a bullish move.

In this weekly bar chart of GS, below, we can see longer-term weakness with some recent improvement in the indicators. Prices are below the declining 40-week moving average line.

The weekly Moving Average Convergence Divergence (MACD) oscillator is below the zero line which is bearish but it has been narrowing towards a possible crossover and a cover shorts buy signal.

In this Point and Figure chart of GS, below, we can see a mixed picture. Prices are in a downtrend with a $213 price target, but a rally to $248 would probably turn things bullish. 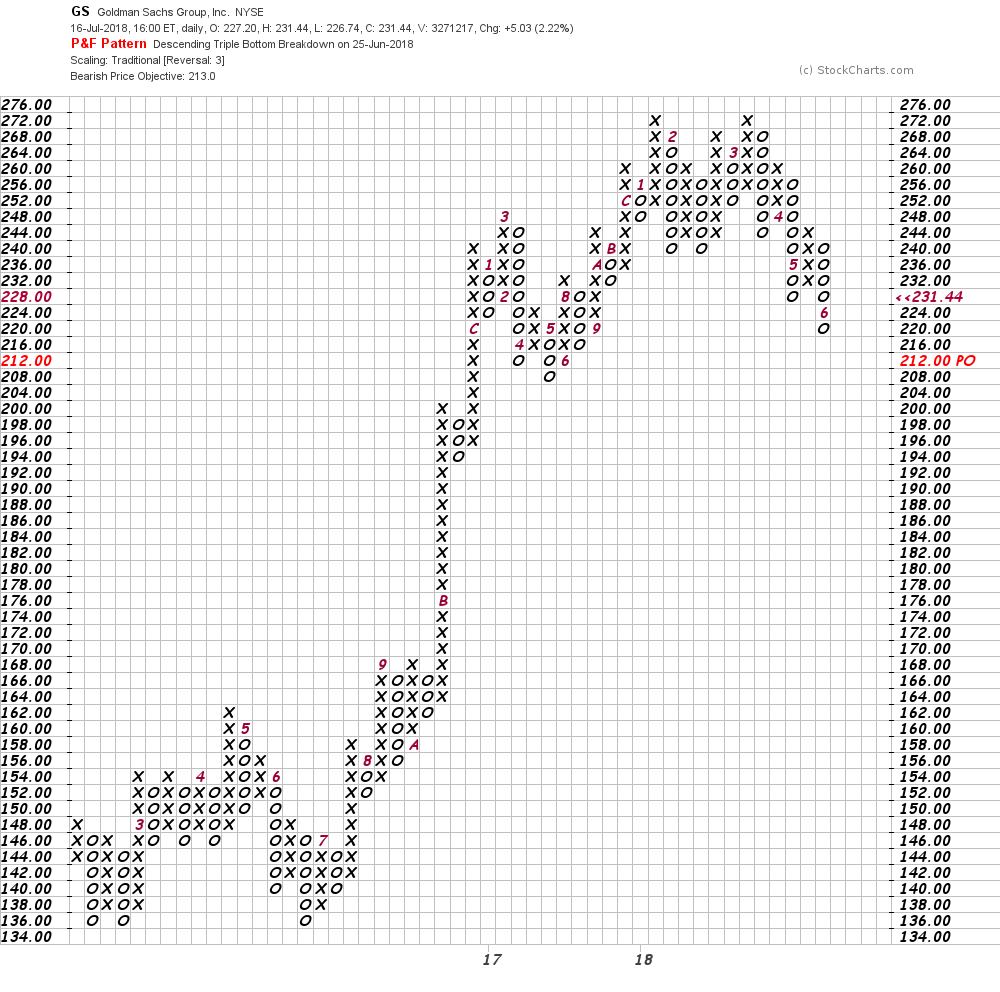 Bottom line: The "art" of chart reading sometimes involves a judgment call between the short-term clues and the long-term signals. GS has made a decline within a longer-term uptrend. Slowing momentum is foreshadowing at least a recovery rally in the weeks ahead. Traders who can afford to risk below $220 can probe the long side of GS at current levels looking for a rally into the $245-$250 area, and then we will need to take another look at the charts.

Get an email alert each time I write an article for Real Money. Click the "+Follow" next to my byline to this article.
TAGS: Investing | U.S. Equity | Financial Services | Earnings | Stocks