The Barron's cover story on oil from July 15 was an incredible miscommunication on where the market is likely to go. And while they might have come up with some rather decent recommendations in weathering the extended oil bust -- with Exxon Mobil  (XOM) , Chevron (CVX) , Canadian Natural Resources (CNR) and Suncor (SU) -- their math and methodology is way off. It's important to fully understand that math before making a new oil and gas investment decision.

The oil cover story on Barron's tried to highlight oil companies that they said could operate profitably with $50 oil. Their major thesis in developing this list of recommendations relied upon a trend of increasing capital expenditures in oil exploration and production companies, without the concurrent production increase that historically is supposed to follow along with sharper spending.

Of course, it has been my thesis all through the Spring and Summer that oil E&P's are following a lemmings path of marching over a cliff of unprofitable oil production, using the continuing resources of Wall Street and other private capitalization. On this, Barron's has come to the same conclusions I have -- if three months later. But their analysis of capex spending as the barrier to better results is wrong. Have a look at their math: 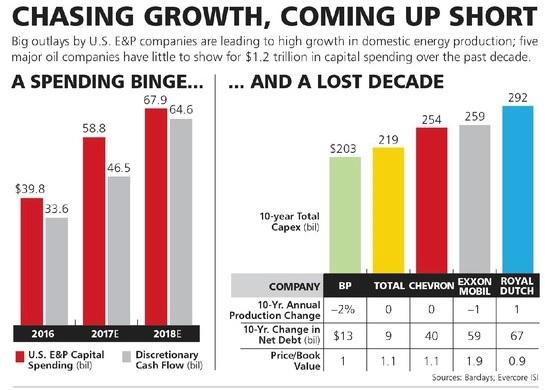 Barron's looks at the capital expenditures for 2016 and the expected spend for 2017 and 2018 -- and sees monumental rises. From those increases, they infer a concurrent rise in production, keeping the glut in oil firmly in place and keeping oil prices restrained.

Now, I am in agreement that this oil bust is going to take longer to clear than we all originally thought, but the projected increase in capital spending is hardly the reason why. First, we must remember that capex spending in 2015 and 2016 dropped nearly 70% from where it was in 2014, making the projected rises shown in 2017 and 2018 barely noticeable. The spending increases have been moderate, although certainly premature, from most of the majors and many of the strongest US shale players, but still are nowhere near to where they were when oil prices were hovering around $100 a barrel.

Indeed, capital spending projections are absolutely sure to come down massively for the rest of the year and into 2018, now that oil companies and most analysts are convinced that oil prices cannot significantly recover, at least until the Spring of 2018.

So, what are we to make of the recommendations Barron's makes, based on these faulty assumptions? First, their call of Exxon, based on its strong integrated exposure to chemicals is a good one, especially given its very solid cash position compared to every other major out there. I concur with using the strong mega-cap multinationals as fine 'bond-like' holdings, although I slightly prefer Total (T) right now. As for EOG Resources (EOG) , they are well-known and well regarded -- perhaps too much so. The value of this 'best in breed' shale player is just not there at $91 -- and with several more months of flat to downwards oil price pressure, cannot be recommended right now, right here.

As for the Canadian oil sands companies, I still believe that their prospects are poor, considering the strong U.S. competition, the continued environmental hurdles and infrastructure and pipeline logjams. The analysis of their lower breakeven points does not take all of their costs into account and I am as suspicious of their professed breakevens as I have been of even the most efficient Permian shale players' projections.

Barron's has been rather good in seeing the longer-term problems with oil production and oil prices, so their latest, more-pessimistic view on the sector is probably in the right ballpark. But their math is not. With that in mind, take their recommendations with a grain of salt -- some make sense, while others are not worth considering right now.

Get an email alert each time I write an article for Real Money. Click the "+Follow" next to my byline to this article.
TAGS: Investing | Global Equity | Energy | Markets | Stocks