AeroVironment (AVAV) has garnered some attention recently after accelerating higher at the end of last month. It has moving to its best levels in two years and to within spitting distance of all-time highs around $41.50.

In case you're not familiar, AVAV is primarily a provider of drones (unmanned aircraft systems, or UAS) and tactical missile systems to the U.S. Department of Defense. This segment accounted for 88.5% of revenues for fiscal year 2017 (ended April), with the remainder coming from its efficient energy systems segment (EES), which targets the growing demand for electric transportation solutions.

On June 27, AVAV reported that fiscal fourth-quarter revenues increased 48%, year to year, to $125.4 million and versus estimates of $122.9 million, with earnings coming in at $1.30 per share, well ahead of estimates of $0.99. Despite that big beat, the initial reaction was negative, as management issued downside guidance for first-quarter FY 2018 earnings and revenues. After gapping lower, however, the shares reversed, and began to squeeze higher through the session, closing the day +8% on volume that was about five times above average.

Over the next several days, AVAV continued to climb, gaining a little over 17% amid continued accumulation before settling down just under the $40 mark.

Unfortunately, things get a little tricky from a valuation perspective. AVAV's enterprise value-to-sales ratio is attractive at 2.6x, but with a forward P/E multiple of 72x and a forward PEG (P/E-to-growth) of 12.5x (analysts' estimates that top- and bottom-line results will rise by 7.1% and 5.8% over the next four quarters, respectively), investors may be looking further down the road, when earnings are expected to start ramping higher.

So Where's the Trade?

The reason I'm highlighting AVAV today is that it's been forming what I like to call the "doofus" pattern, which is nothing more than a short-term triangle that's developed after a big upside pop on heavy volume. I call it the doofus pattern because every time I see this pattern -- take a look at BioLife Solutions (BLFS) for a recent example -- I think to myself that it's too extended to move any higher, and more times than not, I feel like a doofus soon after for not taking the trade. 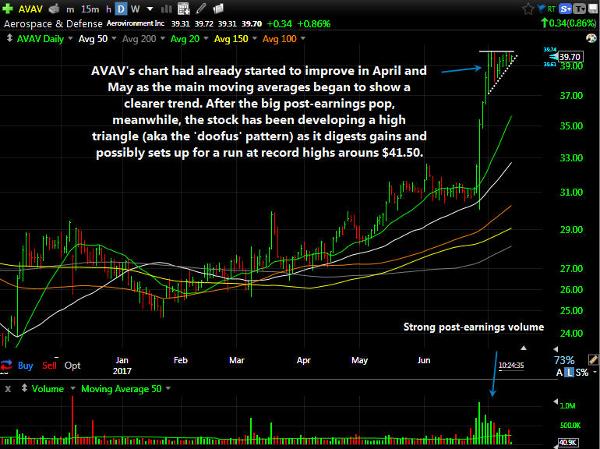 Like so many other names in this market right now, AVAV's valuation seems to be a bit rich, and the stock is well into overbought territory. However, it does have an attractive pattern and could be setting up for a decent short-term trade, particularly with a tight stop just under $38.

-- Written by Jim Koford
Get an email alert each time I write an article for Real Money. Click the "+Follow" next to my byline to this article.
TAGS: Investing | U.S. Equity | Transportation | Technology | Earnings | Stocks

Is BABA at a Bottom?

The decline in Alibaba Group appears to be over, and the long-term uptrend should get going again.

AMD's Risk/Reward Looks Better Than It Has in a While

AMD still looks poised to gain more CPU share in 2021 and 2022. And its gaming GPU business might be competitively stronger in 2022 than markets currently expect.

Jim Cramer: Unless You're Willing to Take a Beating, It's Time to Reposition

The reprieve is here. Do not miss it.