Costco Wholesale Corp. (COST) is getting its own dose of markdowns and discounting in bulk as share prices have fallen about $30 in about five short weeks. COST has broken below its May and March and even January lows and the still-rising 200-day moving average line. Not a pretty picture.

Do we blame Amazon.com Inc. (AMZN) or were some of the indicators showing signs of weakness beforehand? Let's check the charts and indicators to see what's going on.

The warning signs start showing up in April, May and June. The daily On-Balance-Volume (OBV) line starts to move higher in November as buyers of COST became more aggressive. Look closer at the movement in May and June. The OBV line makes a high and then a higher high, but prices only make equal highs. Despite the OBV line making a new high, prices where not able to push to a new high. Now look at the momentum study in the bottom panel of the chart above. Momentum is pretty much flat from February to May and June even as prices work higher, giving us a bearish divergence.

In this weekly bar chart of COST going back three years, above, we can see how prices have swung above and below the rising 40-week moving average line. The bulls would say that the trend is still up and previous declines below the average line were buying opportunities, but notice that the level of trading has been much heavier in the past two months than the previous three years. COST bears have been more aggressive sellers than in any other period. The weekly OBV line has moved higher the past three years but it has dipped since early June. The trend-follow Moving Average Convergence Divergence (MACD) oscillator has turned lower with a take-profits sell signal and soon could slip below the zero line for an outright sell signal. 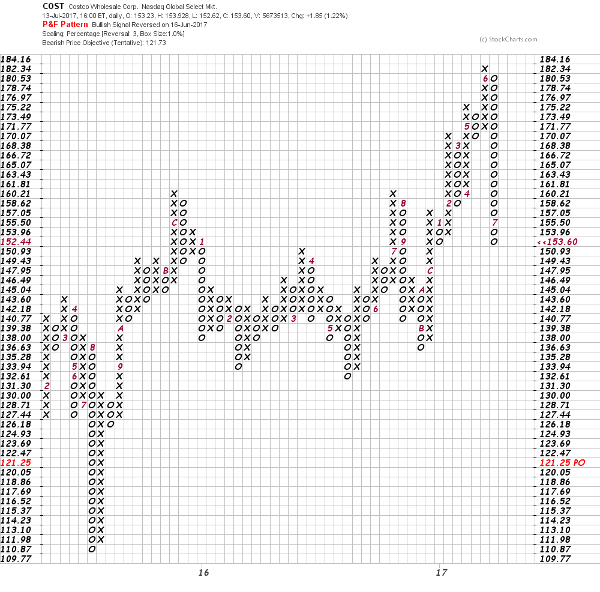 In this Point and Figure chart of COST, above, we can see a long column of "Os" with no gaps as COST sold off. This chart shows both a lot of potential support below the market and a bearish downside price target of $121.25.

Bottom line: The short-term trend of COST is down, but prices are extended on the downside. Prices could have an oversold bounce, but there is some nearby support around $160 that could reverse roles and become resistance on a bounce. Because of the heavy selling the past month I would anticipate a test or break of the September-November lows. I'd say $140 would be my downside price objective for COST.

Get an email alert each time I write an article for Real Money. Click the "+Follow" next to my byline to this article.
TAGS: Investing | U.S. Equity | Consumer Discretionary | Consumer | How-to | Risk Management | Stocks

Will Apple Prove to Be Hardy Stock or Just Low-Hanging Fruit?

A look at shares of the market and tech bellwether as the broader averages comes are under selling pressure.