Early on in my columnist career, I talked about the basics of oil and energy stock trading and often cautioned to never, ever, use ETF proxies for oil, particularly the United States Oil Fund (USO) . In recent years, I guess I've forgotten about these ETFs, and haven't bothered to reiterate my hate for them. But in recent columns, when oil stocks have been overpriced comparative to oil barrels, I've advised that the buy, if there was one, was in oil itself. This brought a slew of emails asking about the USO and other oil ETFs, and how to use them instead of oil futures.

So let's again make this clear and show why the USO, and other oil futures ETFs, are literally the worst investments in the world.

Oil futures and other commodities are traded in monthly deliveries, unlike oil stocks or virtually any other asset you can name. This makes generating a linear and singular price for "oil" a complex affair, as literally the price vehicle that's quoted around the world for "oil" destroys itself every 30 days. 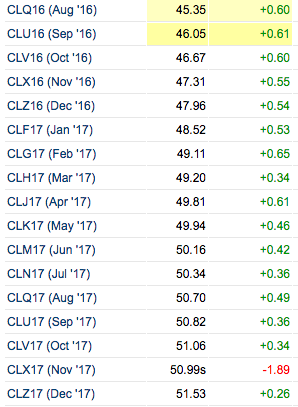 Notice how the price of each monthly delivery for oil today is unique. These prices, arranged by months, are known familiarly as the "curve" of oil futures prices. Today, as has been often the case in recent years, the prices of oil increase as we move further out in the curve -- a condition known as contango. Keep this continuing premium as oil moves along the timeline in mind as we continue our explanation.

Oil ETFs try to describe oil's "price" as if it were a stock -- that is, one singular price. But as time moves on, there are problems with this. First and foremost, while these ETFs must initiate positions in mostly front month futures to keep track of oil, they then must constantly sell those positions as front months expire, reinitiating them further down the curve. This "rolling over" of positions is a constant, unending directive for these ETFs.

Now, back to our contango. It should be obvious that every sale of contracts towards the front of the curve that is accompanied by a buy towards the back in a contango market requires a premium be paid -- this is the first and most expensive cost that is constantly being charged by ETFs to oil fund buyers -- whether you see them or not. A pretty deep contango market has become a staple of oil for quite a while, as it tends to appear when the physical markets are in glut, as they are today.

But even if the contango is not as deep as it looks today (and the oil market has been known to flip into the opposite condition, called backwardation, rather often) there are still fairly heavy fees that are applied by these ETFs for management, as well as the brokerage charges for the heavy futures trading they must constantly balance.

Whew -- that's the quick explanation for why oil ETFs are so horrible. But a simpler explanation of why you should stay away can be graphically shown with a few charts comparing the returns from the USO and the quoted continuous price of oil: 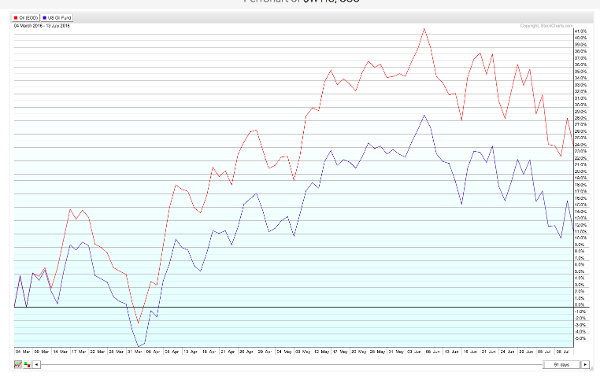 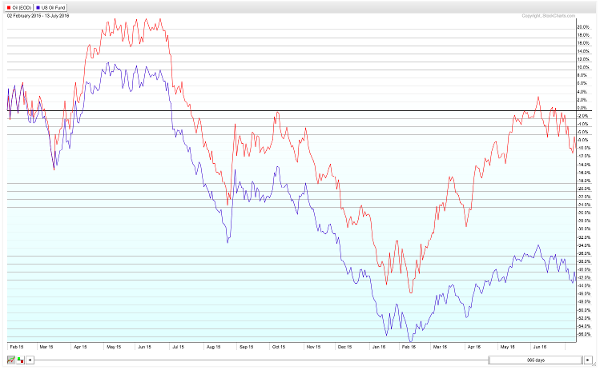 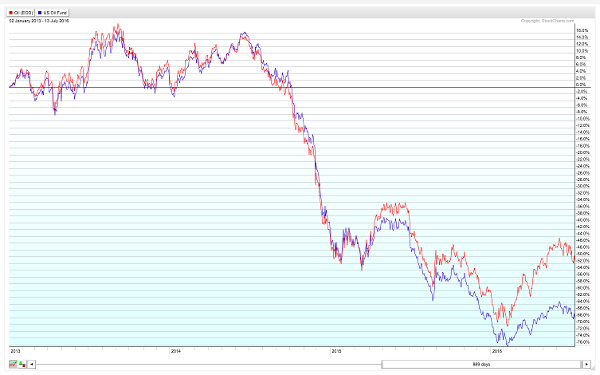 Here are three graphs, each for the last three months, the last year and since the start of 2013. All of them are jarringly representative of just how pitifully the USO performs compared to the reported "price" of oil. Sure, there are moments when the USO can, for a time, keep up (usually when markets are near or at backwardation); but for the most part, the USO is far more likely, at any price, to go down rather than go up. That makes it a really terrible investment choice.

Indeed, if you want to trade oil prices, you have no other smart alternative than to trade oil, which is something I did for 25 years, but almost never recommend for inexperienced investors.

But the point should be made -- never, ever use the USO, or another oil ETF as a proxy for oil prices. You're much more likely to lose than with just about any other investment.

This is making these ETFs, in my view, the worst investments in the world.
Get an email alert each time I write an article for Real Money. Click the "+Follow" next to my byline to this article.
TAGS: Commodities | Markets | Energy | Investing | ETFs | Funds | Futures | Stocks

It's Only a Month, but This Deep-Value Portfolio Is Performing Quite Nicely

The aggregate return of the 2021 Double Net Value Portfolio one month since inception is outpacing a handful of Russell indices.

Bases in the energy market can take a long time to form.