I flipped the page on my office calendar about a month ago, looking ahead. Markets were trending lower at the time. Why would I look ahead? That's an easy question to answer, and a question that I bet you can pose to Jim Cramer (or any trader), if you like, and get the same answer. I was planning to take a few days off in late June, just so my lovely bride of many decades would not leave me. Before I could do this, I had to pinpoint just when "earnings season" kicked off in earnest. For those that do something else for a living, this may seem odd. You see, traders never take off during earnings season. It's just not done. For this is the season not only of earnings, but of opportunity.

We used to search release dates for Alcoa (AA) . That firm prior to their split had always symbolically kicked off the season, sort of like a ringing bell. Alcoa has since passed that torch on to a multitude of big banks. It is now the likes of JP Morgan (JPM) , Citigroup (C) , Wells Fargo (WFC) , and PNC Financial (PNC) that get things going. Traders who need a break will try to slot time off (if necessary) into that short time period in between seasons. Then, I noticed something else. These large banks would be reporting not just on a Friday, but on Friday the thirteenth. Hmm. What could go wrong? C, JPM and GS are holdings of Action Alerts Plus.

1) The only trade news that broke on Thursday was positive. Stories circulated on Wall Street that China was interested in heading back to the bargaining table, and that the U.S. would be receptive to such an overture. Markets took these rumors very well. Do not be surprised to see some profit taking early today, regardless of how the banks perform.

2) President Trump left the NATO Summit to land in the UK. At least on the surface, it looks like he may have actually gotten something done there. Will NATO spend more on defense? On the surface, it would appear so. Broadly, the S&P SPDR Industrial Select Sector ETF (XLI) gained 1.2%, which outperformed the broader marketplace. More specifically, the SPDR Aerospace & Defense industry ETF (XAR) outperformed (+1.8%) the sector. Beating the industry itself were such giants as Northrop Grumman (NOC) , which was up 3.3%, and Lockheed Martin (LMT) . That name ran 2.2%. LMT is a holding of Action Alerts Plus.

3) June data on consumer-level inflation printed just a bit hot this week. Year over year, CPI now sports a 2.9% tag, which is more than year-over-wage growth. That number currently stands at 2.7%. Problem? Well, the 2s/10s yield curve is profiling at less than 25 basis points this morning.

This, coupled with the issues around trade disputes, suggest an economy that could have trouble growing at some point over the next couple of years. However, Fed Chair Jay Powell indicates that he sees no such problem, for now.

Perhaps, the potential for growth over a 10-year outlook should be viewed in relative terms. The spread between the U.S. 10-year and the German 10-year is now up to more than 257 basis points. Relatively speaking, that would make the U.S. a juggernaut... and you thought we had problems.

When markets show overt concern over the issues of the day, we often run stories that we think retail investors would want to focus upon. Themes such as "where to hide" and "who's less exposed" grab the attention, for obvious reasons. How about we try for today a different take? Why not muse on what raises the hairs on the back of your neck? I mean, we don't get scared -- we always adapt -- but it is Friday the thirteenth.

Would I own Tesla? Sure. I am flat right now and have been for a bit, but I have been both long and short (multiple times) the equity in this name over the past year. Though I do not like the name, my semi-recent long position easily outperformed any of my 2017/2018 shorts. Tesla is a dangerous stock. As I just told you, I most recently played the name from the long side, not for any fundamentally sound reason, but because more than 31% of the float is held in short positions -- and the last time that I tried to short the stock myself, I was unable to get the borrow.

Now, there are more negatives than just the cash-burn story. With the phasing out of the firm's federal tax credit that will hand a price advantage to Tesla's competitors in the electric vehicle space. Plus, there are now multiple workplace safety concerns being brought to light. Bret Kenwell covered that story here at TheStreet last night.

One hundred dollar ranges are normal over two months, right? Hey, this is still a cash-burn story. The name still runs at a negative levered cash flow that ends in a "B", not an "M."

This is gambling, not investing, and I have no problem with gambling. Just know what it is that you are doing. I will still play the name. You can bet your tail that I will keep my size small. This one is simply for the entertainment value. No trading talent required.

I have one rule when investing for myself. (Okay, that's a lie. I have many rules). That would be that I will not initiate a position in a scandal-ridden name for quite some time afterwards. I play the game clean, and I want my investments to do likewise. Are the sales practices that got this firm in trouble in the past truly just that... in the past? Very possibly, but you just do not know.

What you do know is that the firm reports this morning. Wall Street is looking for roughly 5% earnings growth, on an actual decline in revenue. Still, the name got an upgrade and an increase in the price target from Morgan Stanley (MS) earlier this month. The firm increased its dividend and its share repurchase program in the wake of the recent CCAR results.

The bottom line is that I have enough exposure to the group in the form of JP Morgan (JPM) , Citigroup (C) , and Goldman Sachs (GS) . I don't need to be here. So, I am not. At least not yet.

"Just what the heck are these guys doing?" That seemed to be the consensus yesterday in the wake of the firm's announced take-over of CA Technologies (CA) . Down went AVGO to the tune of 13.7% or more than $33. Down went the firm's ratings and/or price targets at B. Riley FBR, Nomura Instinet, Evercore ISI and RBC. In fact, I only really noticed one analyst, that being Timothy Arcuri at UBS, who was willing to give Broadcom CEO Hock Tan the benefit of the doubt here, based on Tan's reputation for having an ability to unlock value.

I mean, AVGO only trades at 10x forward-looking earnings. The firm can boast strong fundamentals across the board. The real problems that I gathered from reading comments made across the analyst community were in connection to what those folks felt was poor communication around this event. The firm needs to possibly host an earnings-style conference call. I think they at least owe that to shareholders who probably felt like they were hit with a sledge hammer yesterday. For me, there are plenty of semiconductor names with strong fundamentals that I can stay long while I watch this from a safe distance.

Remember this cute little guy? IQ was my secret weapon from my monthly Trading Strategies note for June, and wow!! Did this name ever pop -- in both directions, multiple times. This stock is quite simply a beast. A Chinese name that might be compared to Netflix (NFLX)  and is majority owned by Baidu (BIDU) , the name is wildly volatile and seems to trade off of "trade war" headlines, though that would be to some degree ridiculous. Just look at the chart. 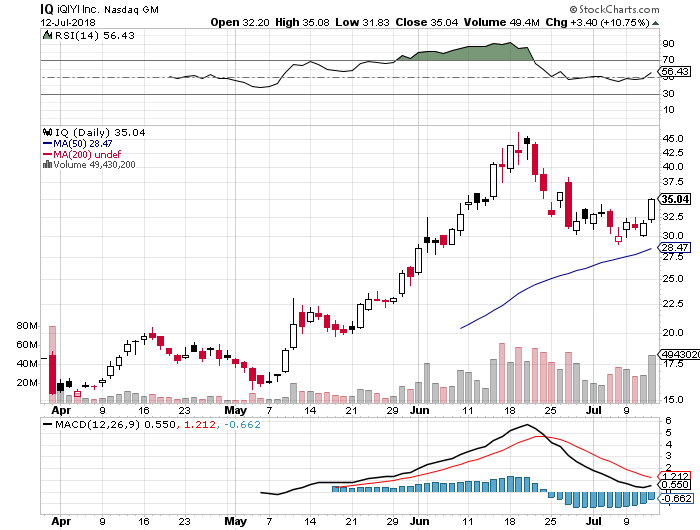 Am I still long this name? Yes. What is obvious to me is that Baidu is going to use this stock as a piggy bank. They filed last week to sell another 7.2 million shares to the American marketplace. Currently, BIDU owns a rough 69% of IQ. The bottom line here is that speculators are running the stock. Do I want to sell? Maybe someday. The truth is that this is a stock that I am often asked about because people know that I am long -- and have been since it hit the secondary market.

How do I manage this name? I have isolated it. What I mean by this is that I have placed it all by itself. I don't look at it and it is not part of my daily P/L. This is a fun name to own, but not while it's moving around -- and not while one is trying to work. Out of sight. Out of mind.

This is the only position anywhere in any of the portfolios that I run that I do not have a proper plan for. This is a stab in the dark, which is fine as long as your risk profile is tolerant of such behavior. You can't bet grocery money here. This is simply "Mad Money."

Otherwise it sits there til I get sick of it.

Get an email alert each time I write an article for Real Money. Click the "+Follow" next to my byline to this article.
TAGS: Investing | Global Equity | Regulation | Markets | Economic Data | Earnings | Economy | Newsletter | Options | Politics