Based on the charts and indicators, the stock price of Action Alerts PLUS holding Abbott Laboratories (ABT) is poised for a fresh upside breakout and further gains. Let's look closer.

In this daily bar chart, below, we can see ABT has made two "legs" higher from its December nadir. Prices have risen from near $42 in April to June to over $49. ABT is above the rising 50-day and 200-day moving average lines. The daily On-Balance-Volume (OBV) line has been rising since early December, telling us that buyers of ABT have been more aggressive. The Moving Average Convergence Divergence (MACD) oscillator turned lower at the end of June for a take-profits sell signal.

In this weekly chart of ABT, below, we can see prices have made a large saucerlike bottom pattern since 2015. ABT is above the rising 40-week moving average line. The weekly OBV line is positive, as is the weekly MACD oscillator.

In this Point and Figure chart of ABT, below, we can see a trade at $50 will be a breakout and open the way for potential gains to $60. 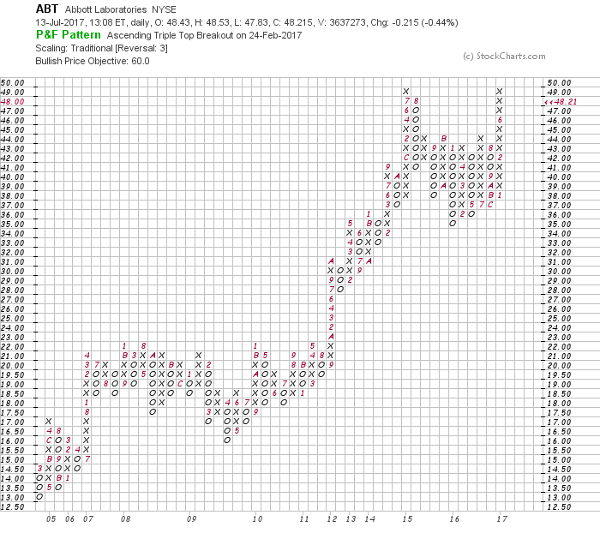 Bottom line: The charts and indicators for ABT are constructive and I would look to buy ABT at the current market level risking below $46 with $60 as the upside price target.

I'm Buying Arcturus Therapeutics Stock and Here's the Reason Why

My COVID vaccine eligibility actually began about a week before my symptoms began.

The upgrade got my attention, but positive-looking charts pushed me over the edge.

Jim Cramer: For This Pandemic, and the Next, There Are Several Stocks I Like Now

There's an undercurrent that will grow over time, basically what tailwinds from the pandemic will stay with us after the pandemic's over.

The Doctor Found Something Amiss on the Charts of Teladoc