The tennis match is still on. The ball continues to bounce between 2,700 and 2,800 so the court is just a bit longer than it was a few weeks ago but the boundaries remain.

The thinking is that if you replace a negative (red) number with another red number you do not gain more downside (unless you replace say -500 with -1,000) and since a overbought and oversold is about momentum we're just trying to gauge which way the momentum is shifting.

On the table below in the first column I have listed the numbers we are dropping off the 10-day moving average-what I call the Oscillator-and you can see after Thursday's big red number there is not a lot of red to be seen in the next week.

The 30-day moving average of the advance/decline line (more of an intermediate term Oscillator) has a similar situation. After Friday there is not a lot of red to be dropped. 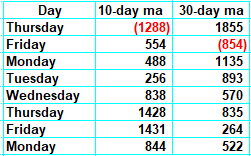 If you are looking for some good news, then I suppose we can note that very few of the black numbers to be dropped are four digit ones. So for example on Tuesday we drop +256 which is easy to beat (i.e. have a higher reading to uptick the Oscillator). But mostly the trend says overbought.

Earlier in the week I noted the Nasdaq Momentum Indicator would hit its first peak on July 11 (Wednesday). This indicator works differently because it is based on price. Here I walk Nasdaq up another 150 points in the next week and we can see that it mills around and then peaks and falls down. That date it peaks is Tuesday (July 17). That makes Nasdaq into overbought territory with a maximum reading on Tuesday of next week.

Sentiment is not terribly bullish though. It is a bit more complacent than it was a week ago but it's definitely not 'too bullish'.

The chart I think we need to pay attention to is the Transports. It hasn't broken down. Yet. And it might not. The 10200 area is support but more so is the 200 day moving average (blue line on the chart). 200 days ago was September which means that line could start flattening out in the next month or so. A break of 10200 could make the long term moving average roll over. And that's when concern would get high.

Get an email alert each time I write an article for Real Money. Click the "+Follow" next to my byline to this article.
TAGS: Investing | U.S. Equity | Markets |

With Coronavirus, Ignore Those 'Talking Their Own Book'

Chinese consumer confidence will likely be dented for much longer than the global equity markets are currently assuming.

What's Most Notable About Friday's Market Action? Its Complacency

Time for some rest in front of the three-day holiday weekend.

More and More Money Is Chasing Fewer and Fewer Stocks

Bearish divergences persist in this market.