As I set about to try to make a few bucks yesterday, I was fully aware that the President of the United States was in Brussels and that the NATO summit could get a little dicey. I had known about the prep work being done on an additional tranche of Chinese imports since the night before. I knew that U.S. equity markets were short-term overbought, and was mentally prepared for some risk off behavior. Bet you were too.

As for commodities, it would have been normal to expect some weakness around the growth-related issues that a potential trade war and some dollar strength could provoke. What I did not see coming was a 5% drop in WTI Crude pricing. That one hit me square in the forehead. I watched with astonishment as most of the televisions near my spot showed England play Croatia in their World Cup match. Nobody around me seemed to notice the full dollar handle for WTI fail (again) at the 74 level. Then it came quick. The 73, 72, and 71 handles all folded like a cheap suit on a humid day.

Now, I had to act. My oil names were still above basis, and I do not like to violate basis, at least not with equity. Rather than play games on the options side, these decisions are made on the spot. My instincts roared. Would the $70 level hold? So it would. Sort of. For now. I had added to a few of my oil longs. At least Exxon Mobil (XOM) , and what used to be known as British Petroleum (BP)  (an Action Alerts Plus holding) from the exploration / production side, and Halliburton (HAL) from the services side.

In the case of the latter, I actually have been forced to defend basis. I also considered digging in on my other energy longs (Action Alerts Plus holding Schlumberger  (SLB)  and Royal Dutch Shell  (RDS.A) ), but in truth, I am exposed enough on those names. All I need is a small bounce across the space this morning, and I will bounce right out of these three partials.

But what are the prospects now for Crude?

On top of the news from Libya, Saudi Arabia announced that the kingdom had increased production in June to levels close to two-year highs. This was even more important than tough talk on trade. It would appear that the fundamental news flow had changed direction.

In addition to all this, Secretary of State Mike Pompeo seems to be weighing waivers for sanctions on Iran around oil production, and then there is simple dollar strength. This is a lot to overcome. The $74 level, if not already obvious as significant resistance, now seems laid in cement. The level for potential support becomes key. You might expect to see a technical rebound early today. Should that stall around $72 ( a level this past Spring), the slope becomes all that much more slippery -- and $66 would not, at least to me, seem to be all that unrealistic.

Incredibly, with all of these high-profile headlines banging off of every wall, many usually important items seem almost overlooked, but would still be key to investors.

2) Morgan Stanley's Brian Nowak reiterated his overweight rating yesterday for Amazon (AMZN) . Is that a big deal? I don't know. Nowak looks for earnings before interest and taxes for the "death star" to run at $5.4 billion for the second quarter, and $6.4 billion for Q3. Those numbers are well above Wall Street consensus. The big deal (that caught my attention) was the $2,600 number that Nowak threw around -- not as a price target, but as a possibility based on prospects for the continued growth of Amazon Web Services. Huzzah. AMZN is an Action Alerts Plus holding.

3) This morning's Core CPI figures matter. Big Time. Futures markets in Chicago are currently pricing in a 60% probability of a fourth 2018 rate hike in December. You add 50 basis points to the Fed Funds rate, what does that do to the 2-year note? Will a trade war further dampen expectations for growth? Inflation is key.

4) Broadcom (AVGO)  announced late Wednesday that the firm had agreed to acquire CA Technologies (CA) (You older kids know this as Computer Associates. That one used to have some crowd.) for $18.9 billion in cash. That comes to a market price of $44.50. Does this heat up the software space? The cloud? It would be nice. We'll see.

5) The banks were down as a group yesterday, but in general, outperformed the broader market just ahead of earnings. The yield curve, of course, is no help here, but there is certainly reason for optimism (buybacks aside) ahead of the numbers. The group's behavior this afternoon should be key to quite a few P/Ls. I am probably focused on investment banking and trading revenue (Wall Street stuff) as much as loan growth, as there is just not as much money to be made in lending as had been anticipated.

So Apple (AAPL) takes a 1.3% hit on trade-related news, while the S&P 500 walks back a more pedestrian 0.7%. Even the Dow Jones Industrial Average, thought to be highly exposed to this type of threat, gave up (-0.9%) less ground than did AAPL. Does America's most-valued corporation have a problem?

Foxconn Technology operates out Taiwan. Right? Hmm. Here's the deal, gang. Apple operates 40 retail stores in China. At first glance, AAPL is not among the most-exposed U.S. corporations to Chinese revenue, but close to 20% of the firm's revenue is from the region, and Beijing could try to enforce its influence as the nation loses its ability to match the Trump administration on tariffs tit-for-tat.

Though President Trump has promised Tim Cook that iPhones manufactured in China will go untouched by these taxes for now, the Chinese government will certainly be able to interfere with supplies of parts and labor. In other words, Apple is exposed.

Unlike the other FAANG names, Apple is not insulated from current conditions. This will likely suppress the share price until good news breaks, in my opinion. It would not take much for Beijing to put the full weight of its support behind a firm like Huawei Technologies.

Huawei just happens to be the largest telecommunications equipment manufacturing company in the world -- and on top of that, it just happens to be Chinese. That firm was founded, and is run, by a former Chinese army officer, and has been labeled by the major U.S. intelligence agencies as "effectively an arm of the Chinese government." 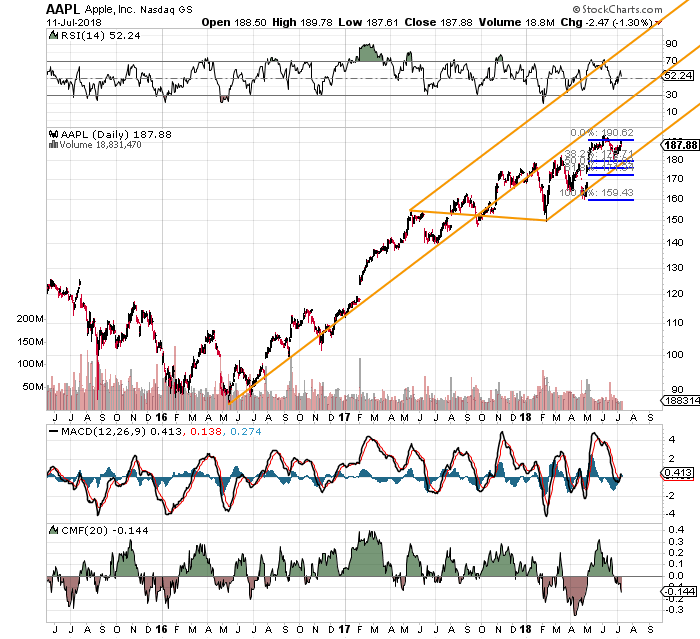 For those holding the shares, there is good news. An Andrews' Pitchfork stretching back more than two years remains unbroken. 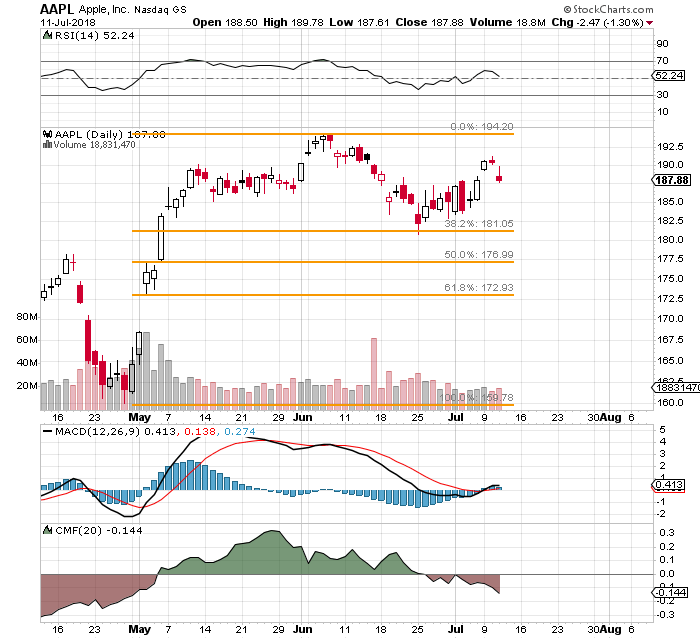 Even on a much shorter timeline, it becomes obvious that the stock's performance is ruled by technical factors more than anything else. My thought? If you're wearing these, you can probably keep a brave face until the 181 level cracks. That's where one would have to decide to either take their marbles and go home or add. AAPL reports after the closing bell on Tuesday, July 31.

Get an email alert each time I write an article for Real Money. Click the "+Follow" next to my byline to this article.
TAGS: Investing | Global Equity | Regulation | Markets | Energy | Financial Services | Technology | Economic Data | Economy | Mergers and Acquisitions | Newsletter | Politics