Microsoft Corp. (MSFT) has put in a strong upside performance over the past three years. Long-time holders of MSFT were probably cheering after four years of sideways trading around $30 from 2010 to 2014.

The stock has climbed from $54 last July to break temporarily above $72 last month, but the chart also shows that prices have consolidated between $67 and $73 in the past nine weeks.

Let's check our charts and indicators to see if MSFT is due for further gains or more sideways price action in the weeks ahead.

In this daily bar chart of MSFT, above, we can see that prices tracked and tested the rising 50-day moving average line from November into June. In the past two weeks, MSFT has spent more time below the 50-day line than any time in the past year. The 200-day moving average line is trending higher, and we can also see a bullish golden cross of the 50-day and the 200-day lines way back in early August.

Rallies can ebb and flow, so a sideways period of trading can just be a pause and not necessarily the start of distribution (selling). The volume pattern has been uneven, but the On-Balance-Volume (OBV) line rose from July to October and from March to early June. The OBV line has leveled off since early June.

The trend-following Moving Average Convergence Divergence (MACD) oscillator declined below the zero line recently for an outright sell signal, but the two averages that make up the oscillator look to be narrowing, and we might next get a cover shorts buy signal.

In this weekly bar chart of MSFT, above, we can see that prices are above the rising 40-week moving average line. The weekly OBV line has been positive since June 2015, telling us that there has been considerable accumulation and aggressive buying.

The OBV line has leveled off the past two to three months. The MACD oscillator on a weekly timeline just crossed to a take profits sell signal. 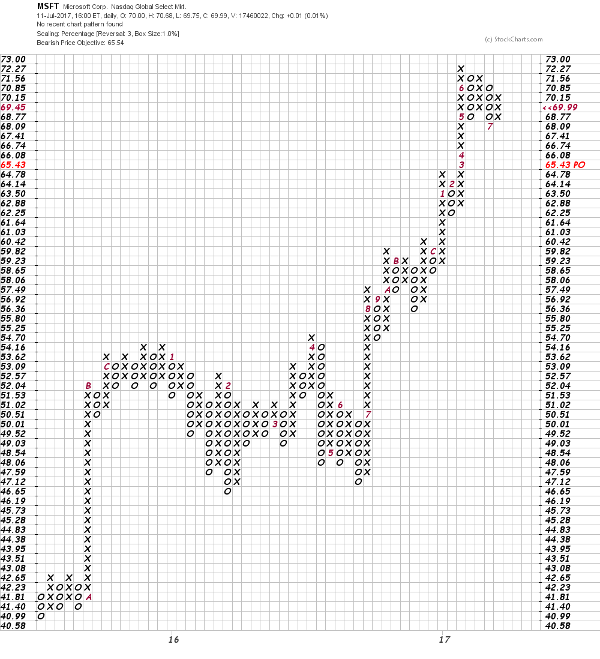 In this Point and Figure chart of MSFT, above, we can see that the price action since May (the "5" on the chart) is a little "toppy" and a downside price target of $65.43 is shown.

Bottom line: MSFT is not showing signs of distribution, but a shallow dip could occur based on the Point and Figure chart. Short-term traders might trim longs on a break below $68, but investors should risk below the rising 200-day moving average line around $64.