Traders were looking past a brewing U.S./Chinese trade war and toward earnings -- at least, that's what they said. That all came to screeching halt after the closing bell at 11 Wall Street had rung last night. Ding ding. Guess what, kids? You're in a fight whether you like it or not. Believe this only gets worse? Know where you want to be. Think this all blows over in due time? Time will tell.

Meantime, know what you want to grab at a discount, and where. Oh, you may want to wear your helmet, and flak jacket. Fasten your chinstrap. Have two sources of potable water. No idea how long we'll be out there.

The President of the United States ordered the U.S. trade representative to prepare the way for a 10% tariff on an additional $200 billion worth of Chinese imports on top of the already implemented 25% tariff on $34 billion worth of goods (with a follow up of $16 billion already scheduled). This time, after spending much of the evening trying to peruse the list of targeted goods to be impacted (The document is 205 pages long -- and there is baseball on at night.), it becomes clear that the U.S. consumer is now at risk of seeing some higher prices.

The president apparently was cognizant of this fact, as the administration had first considered a 25% tax on additional $100 billion worth of imports from China, before doubling the amount to $200 billion and decreasing the tariff to 10%. Lucky us! I would still think that this could be a very sloppy morning for the likes of Walmart (WMT) , and Target (TGT) .

Of course, the weakness seen across global equities as well as overnight equity index futures are something of a knee-jerk. First comes a nearly two-month period where U.S. industries are invited to plead their case. Hearings are scheduled for some time between August 20 and 23. According to Robert Lighthizer, the U.S. Trade Representative, the U.S. remains open to re-engaging in talks with China that could potentially lead to some kind of satisfactory resolution. There are currently no such talks planned, at least that we know of. Holding your breath is probably a bad idea.

Remember the Fed Minutes from the June policy meeting? Those notes showed that our central bankers are concerned that American businesses might be delaying, or even reducing plans to make capital investment, using uncertainty over trade as the reason. I know what you saw in the ISM. Still, they have a point. You saw the longer end of the U.S. Treasury yield curve this morning, right? Support for the 10-year increased on this news last night, compressing that particular yield to less than 2.83%.

Overnight, there was some profit taking in the space, the 10-year note pays more than 2.84% here in the zero dark hours. Still, that relief seems paltry when one considers that as I stare out my office window, the 2s/10s spread profiles a slope of less than 27 basis points. Clearly, bond traders anticipate potential difficulty for domestic and global economies to produce continued growth should Presidents Trump and Xi not figure this out.

Oh, by the way, the U.S. Treasury Department will auction off $22 billion worth of 10-year paper this afternoon, and another $14 billion worth of the 30-year variety tomorrow. At least the government will save some dough in the way of borrowing costs. Hmm. This on top of Tuesday's extremely weak auction of $33 billion worth of three-year notes? Worst bid to cover in seven years? Non-dealers taking down a minority of the issue? Interesting times.

What Do I Expect?

Perhaps more important than this new "trade war" news is the what comes out of Brussels today. Obviously, as the president meets with NATO leaders, the issues we mentioned yesterday will lead to further contention. The president looks for allies to live up to commitments that they themselves have made that would reduce the load that U.S. taxpayers bear for Europe's umbrella of protection. European Council President Donald Tusk might want to be a little smarter next time he speaks, or just not speak.

European allies, and Canada, look to give the impression that they are indeed spending more on defense (they are), while dragging their feet on reaching that 2% of GDP pledge of theirs. Trade disputes are also at issue here, as the U.S. and the EU remain at odds over the already implemented U.S. steel and aluminum tariffs. Keep in mind that at the G-7 meetings in Quebec, the U.S. president did offer to take all tariffs to zero, if trading partners would do the same, and every one of them took a pass. Who is the free trader here, and who is not? This was not lost on Germany's automobile manufacturers.

Perhaps today, we find out just how important the U.S. security blanket is to the alliance, and just how important NATO's article 5 is to not just President Trump, but to the broader membership. The direction of President Trump's meeting next week with President Putin of Russia hangs in the proverbial balance. Watch the defense names. There is potential benefit here despite likely weakness on tough trade talk.

I don't want to beat you to death with directional concern, gang. U.S. traders will wrestle with data on domestic inflation both today and tomorrow. Then on Friday, earnings season kicks off in earnest as the big banks step to the plate. I had originally planned to preview the banks this morning. In the name of all that is decent, I guess I'll give readers a break and try to "squeeze" that in tomorrow. Imagine that. Did you ever in your wildest dreams think that two days before the big banks release their quarterly data, the anticipation of their earnings would be something like page 32 type news? Interesting times.

I have told readers before. The big cloud players have little exposure to China. Yes, it seems obvious today that the small-caps should outperform the broader marketplace. After all, that group finally cooled this week, as traders thought they were moving past the immediacy of trade concerns. You should also see some outperformance from dividend types (Utilities) if growth is indeed a concern. That group could flip the scale of performance that turned against it on Tuesday.

Now, back to the cloud. One name in particular stands out to me as a beacon of consistent performance. Every time, this name gets caught in a larger ETF-related puke-athon, investors seem to snatch these shares up -- on each and every dip. I give you Action Alerts Plus holding Salesforce.com  (CRM) . 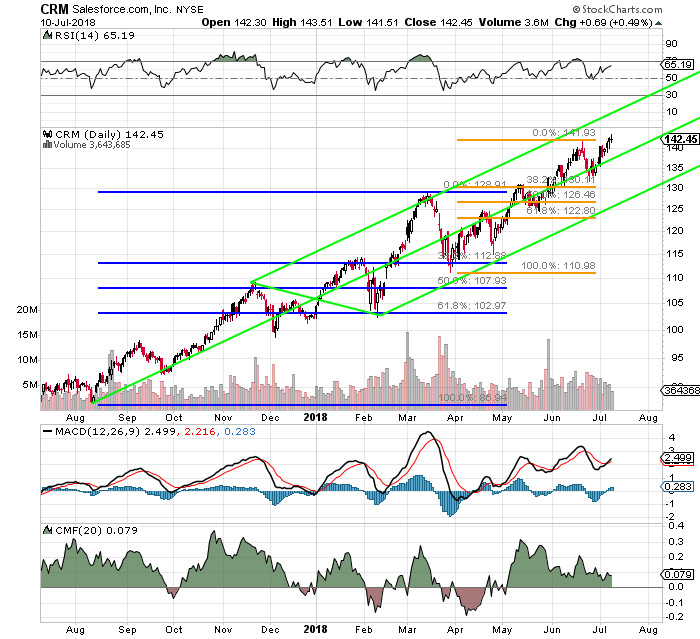 Note, while all of this talk of a trade war has been going on, this name has had a steadily higher trajectory. Notice the consistency in relative strength coupled with the similar consistency of the money flow. The daily Moving Average Convergence Divergence looks suddenly positive as well, though that will be at risk this morning. Do I continue to like CRM regardless of the news flow? Indeed. You saw the note that Goldman Sachs (GS) put out covering IT spending earlier this week, no?

I also think investors can take advantage of any weakness in share prices for Amazon (AMZN) , and Microsoft (MSFT) . I still trust the ability of Adobe (ADBE) to show growth, though that name is currently challenged from a technical perspective. Where I would be careful, and I am long the name, might be in Alphabet (GOOGL) . This is a name that I think risks becoming a political football in Europe. We all know about the potentially large fine that the firm could be facing, we just don't know how political in nature it might be. (GS, AMZN, MSFT and GOOGL are all holdings of Action Alerts Plus.)

Note: It is impossible for me to guess on options premiums this many hours before the opening bell. Just keep in mind that earnings for this name are due on August 28. Last night, Aug 17 135 puts paid $1.57, while the 130 puts (same expiry) paid $0.87. I find it likely that more than that will be paid for these items this morning. I cannot tell you to make this sale, but I will be looking the opportunity over myself.

Get an email alert each time I write an article for Real Money. Click the "+Follow" next to my byline to this article.
TAGS: Investing | Global Equity | Regulation | Markets | Economic Data | Economy | Newsletter | Options | Politics