TJX Cos. (TJX) could be considered oversold, but that is not a good enough reason for me to become a buyer just yet as the stock is still pointed down on the charts. Remember that an oversold market or security can get more oversold. Seeing a pattern of higher lows and higher highs is what I want to see the charts.

Let's check the charts and indicators to see if there is more downside risk.

In this daily bar chart of TJX, above, we can see that prices are below the declining 50-day moving average line and the declining 200-day moving average. In the middle of June the 50-day average line declined down through the 200-day line for a bearish dead cross signal. Notice how volume spiked up in mid-May as prices slumped but volume was lighter in June when prices went to a lower low? The heavier volume at the May low may be a sign that prices are "washed out" and the downside shouldn't be pressed.

In the lower panel we can see equal lows in May and June from the momentum study while prices made lower lows. This is a type of bullish divergence and might foreshadow some price improvement.

In this weekly bar chart of TJX, above, we can see a shift from an uptrend to a sideways trend. TJX turned sideways in 2016 with a $72 to $84 trading range. In May TJX closed below the declining 40-week moving average line and volume expanded. In June prices broke below some support around $72. There is more support down around $66 and that could be the next price objective.

The weekly OBV line has been overall neutral since early 2016 but it will not take much for new lows to be made. The weekly Moving Average Convergence Divergence (MACD) oscillator is in bearish territory. 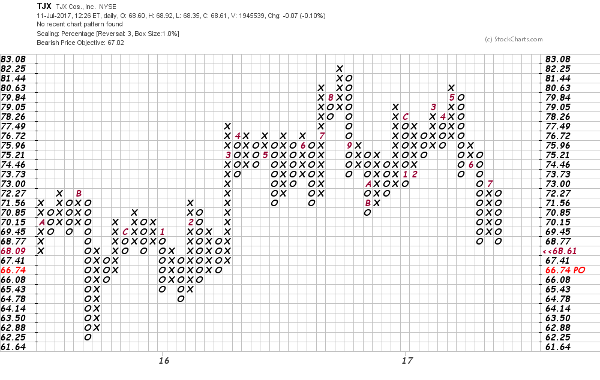 This Point and Figure chart of TJX, above, was constructed by looking at percentage swings. A decline to $66.74 is projected.