It can happen to batters and golfers and traders. Dick's Sporting Goods (DKS) has been in a slump since December. Talented coaches can watch an athlete and can often quickly see what is wrong -- a stance, a grip, or whatever. Correcting a problem can sometimes be more difficult as a bad habit may have to be un-learned first. Discovering what is wrong with a stock can be a more complicated issue I think as the marketplace is discounting knowns and unknowns and hopes, etc. six to nine months into the future.

I make no claims to be able to help anyone improve their game or their score, but I think I can give you some tips on DKS. As Warner Wolf used to say -- "Let's go to videotape."

In this daily bar chart of DKS, above, we can see that DKS had trouble trying to break above $62 from September through December. Prices broke down from their sideways trading range in late December, closing below the declining 50-day moving average line. By the end of January the rising 200-day moving average line was broken. A bearish dead cross can be seen in late February as the 50-day moving average line crosses below the 200-day line. The daily On-Balance-Volume (OBV) line peaked in November/December and began to work lower telling us that sellers of DKS were being more aggressive. A bullish divergence is showing up in May and June and early July as prices make lower lows but the momentum indicator makes higher lows.

Two large declines for DKS can be seen in this weekly chart, above. DKS declined from $60 to $34 in 2015 and in a shorter period of time DKS has declined from $62 to $36 -- roughly the same distance. There is some potential support in the $36-$34 area but I am not sure it will be very durable as prices were only in that area for a few weeks in early 2016. DKS is below the declining 40-week moving average line. The weekly OBV line peaked with prices in November 2016 and you can see a similar peak in May of 2015. The Moving Average Convergence Divergence (MACD) oscillator is in a bearish configuration below the zero line. 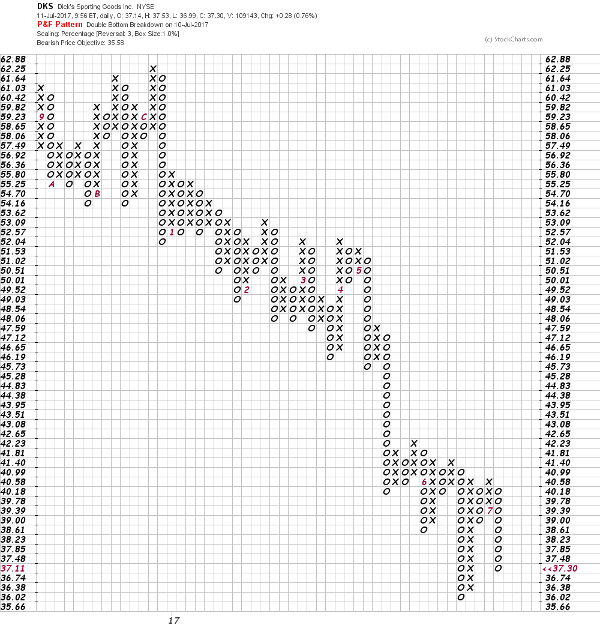 In this Point and Figure chart of DKS, above, we can see the downtrend and a potential downside price objective of $35.58.

Bottom line -- with weak daily and weekly charts DKS is likely to struggle in the near-term. A bottom and a reversal is going to take time but I don't expect much more downside weakness.

Shares of Bobblehead Maker Funko Are Shaking Their Head No, No, No

We may want to hang onto their products but the shares are another story.