PepsiCo (PEP) pleased Wall Street on Tuesday by delivering $1.61 in second-quarter earnings per share on $16.1 billion in revenue, both of which exceeded analyst expectations. With stock is up some 4% Tuesday afternoon at $112.08, let's look at how to play PEP using options.

What the Numbers Tell Us

After a year of struggling with falling cola sales, PEP finally saw some improvement in its flagship brand.

Yes, sales continued to decline as consumers shift toward low-calorie and low-sugar alternatives to cola, but PEP saw its lowest revenue drop in more than a year. And on the flip side, PepsiCo's snack business paved the way for the strong second quarter.

I'm drawn to the pivot that management has taken in regard to shifting consumer taste in beverages. Recognizing the move to healthier drinks, Pepsico has introduced Gatorade Zero, as well as Bubly, a flavored sparkling water.

I became familiar with Bubly a few weeks ago when my wife purchased a 12-pack. It's no surprise I hadn't heard of it earlier, since the product has only been available for a few months. That being said, Bubly already owns a 4.4% market share in sparkling water, so more and more folks will know the name soon.

What the Charts Tell Us

The stock had already been consolidating sideways after a sharp move higher in June, which created a so-called "bullish flag": 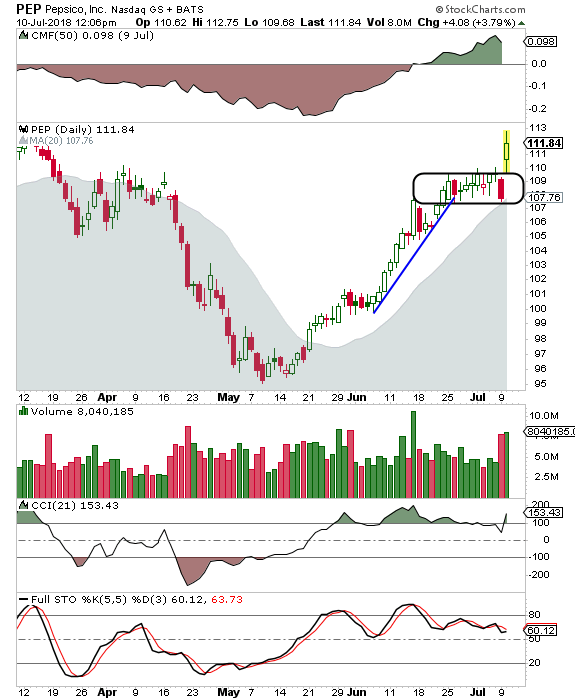 Now, a drop in the stock on Monday ahead earnings appeared to threaten this breakout, with a close under $107 potentially putting the bears in charge.

But all of that has now changed. The stock's volume on Tuesday (a "green" day) will exceed Monday's high volume, which should challenge the high-volume bar from a few weeks back.

Now, some traders might hesitate due to a decline in PEP's full stochastics. But as long as the stock remains above the 50 midpoint, that's bullish for the price action.

How to Play Things

However, one thing to note is that PepsiCo shares haven't historically been big movers post-earnings. In the nine quarters prior to 2018's first period, the stock stayed in a +/- 1%-2% range over the 21 days following his earnings report. (It saw a 3.9% dip following first-quarter numbers.)

Still, I'll take those odds and use it to create a combination trade that would maximize return on a 1%-2% gain from here, while minimizing losses on a 1% drop.

Get an email alert each time I write an article for Real Money. Click the "+Follow" next to my byline to this article.
TAGS: Investing | U.S. Equity | Consumer Staples | Options | Stocks