President Donald Trump will land in Brussels today, one day ahead of the scheduled NATO summit, and just hours after naming Brett Kavanaugh as his nomination to replace Justice Anthony Kennedy at the nation's highest court. The naming of a potential replacement to the Supreme Court is always political in nature, as will also be the expected opposition to this choice. Do I have opinion here? Of course. Is this either an investable or tradable event? I don't really see that, and I am fairly sure that tradability is the only arena where my opinion is actually worth something.

So, back to NATO, because I do believe that this will be interesting, and money might move around. We already know that North Korea is trying to act tough again in order to extract concessions. Is that good? No. Is this potentially good for the defense and aerospace sector? Of course.

Now, NATO will feel some pressure this week. First, because, our allies have largely tried to skate by without paying their fair share for defense -- and here comes a U.S. president who will call them out by name. Second, the very same U.S. president meets with Russian President Vladimir Putin next week in Helsinki. In other words, for allies that have shirked their own responsibilities to the alliance, the pressure is on to show serious progress in reaching their commitments to spending 2% of GDP on defense by 2024.

According to data released by the alliance earlier this year, only the U.S., Estonia, the UK, Greece, and Poland have hit that target in each of the last two years. Nations such as Spain and Belgium have spent less than 1% of GDP on defense, while even an economic powerhouse with an export based economy such as Germany has manged to divert just 1.2% of it's GDP toward defense. Guess who pays the rest? That's right, you do.

What seems clear to me is that these allies are indeed making an effort to increase this spending to higher levels, while also trying to wrestle with domestic economies that are still well behind the U.S. in their recovery cycles. Caught between a rock and a hard place? More like caught between dependency and appearing able to make independent decisions on the issue. It would be in the best interest of these allies to show the desired progress, while awaiting the Trump/Putin summit.

Readers of Market Recon well know that we have been banging the drum for defense since mid-2016 -- which is a good thing. You folks also know that these names have perplexed me a bit since the head-fake in mid-May. Not such a good thing. You know the names. I am long them all to varying degrees. My two favorites remain Action Alerts PLUS holding Raytheon (RTN) , and Northrop Grumman (NOC) -- and I have added on recent weakness. I still run with greatly reduced longs in Lockheed Martin (LMT) , and General Dynamics (GD) , but had to pull money away from those two at panic points in order to strengthen the two previously mentioned names.

On a separate plane would be my long positions in both Boeing (BA) , which is still at an entry level in size for me, and Kratos Defense (KTOS) . That last name is the one that I am most often asked about, as the high-tech drone manufacturer is both priced cheaply enough for retail investors to play and just volatile enough for folks to make some money on the swings. So, let's go there. 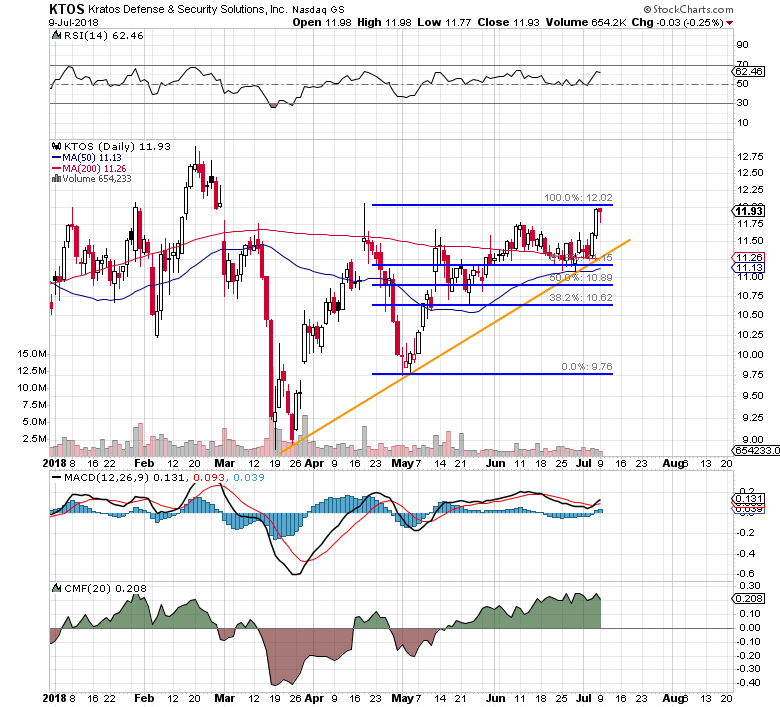 The name has outperformed the sector since the group's meltdown in April. In May, KTOS landed a $93.3 million U.S. Army contract one day after landing aggregate satellite communications contracts totaling roughly $55 million. In June, the firm completed the sale of it's Public Safety and Security Division for $70.7 million. That's a lot of dough for a firm running with an unlikely combination of negative cash flows, but very strong current and quick ratios.

The chart shows a serious chain of higher lows coupled with mildly rising higher highs since May. Recently, the stock hit on a 100% retracement of the April selloff, well ahead of where the group is. Money Flow is strong. All three components of the daily Moving Average Convergence Divergence are riding in positive territory, and the 50-day Simple Moving Average is close enough now to threaten a golden cross of the 200-day SMA.

My Levels for KTOS:

Note: Earnings are due August 9. Options premiums are not attractive enough for me to make a sale on either side. Therefore, for me, this is strictly an equity play.

In yesterday's Market Recon, I went over my levels for a couple of retailers -- Kohl's (KSS) , (an Action Alerts PLUS holding) and Macy's (M) . While preparing that note, I had considered looking at Walmart (WMT) , the Home Depot (HD)  and Ulta Beauty (ULTA) . Well, last night more than one request came in to take a look at ULTA, likely because the name is simply rocking of late. I had owned the stock back in the Spring, and sold the shares when my panic point had been breached. I am flat the name, and the last sale is now higher than where I sold it -- so now you have my attention. Let's get after it.

What's obvious is that the market loves ULTA again. I am amazed at how alert my readership is. Wow. Thanks for the head knock. This name ran 3.3% just yesterday while retail itself generally underperformed the market. In fact, ULTA is now up a rough 11% in July.

ULTA reports the firm's second-quarter numbers after the close on Thursday, August 30. Consensus expectation are currently for EPS of $2.41 (up 31.7% y/y) on revenue of $1.49 billion (up 15.5% y/y). Three-year runs for this firm are currently running at growth rates of 30% for EPS and 22% for sales. The firm appears to be immune to the internet threat, and does not have to pay shareholders to invest. I think our Jim Cramer would call that a by-product of the selfie generation. 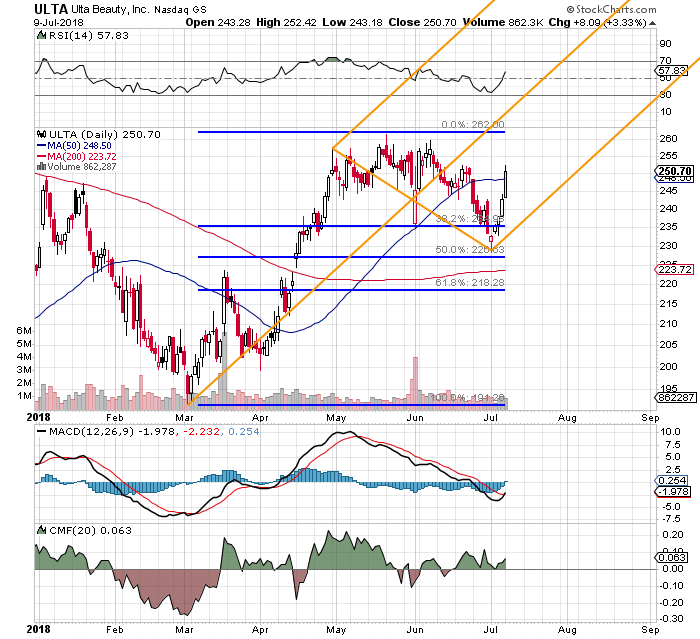 See the sudden change in the daily MACD? The positive change in both Relative Strength and Money Flow? Can the stock hit its May highs up around $262? Yes, I think it can, perhaps before earnings -- but not in a straight line. It is clearly visible that the stock held its ground at a 50% retracement of the March-through-May move and roared back in convincing fashion.

My Levels for ULTA (initiation):

Trade Idea (minimal lots): $250 is a lot of dough. Perhaps too much for a retail investor to comfortably buy 100 shares. Here is a risk-averse way to play this game from the long side. Remember, I hate buying options. I would rather sell them, but there are times where the reward looks interesting, and I do then spring.

In this example, the sale of the put opens up equity risk at that level. The purchase of the call is expensive (but deep in the money), while that sale relieves the cost somewhat. The investor needs to see ULTA trade at $252.85 or greater by expiration to make this trade work. Below that, you're out $785 -- but that might be a lot safer for you than risking 25 grand. You can always buy back the put if disaster actually strikes.

Get an email alert each time I write an article for Real Money. Click the "+Follow" next to my byline to this article.
TAGS: Options | Stocks | Investing | Global Equity | Transportation | Economic Data | Consumer | Economy | Newsletter