Acacia Communications Inc. (ACIA) put in a small top formation back in the second half of August, September and early October. Unfortunately, we have yet to notice a bottom formation on the charts or in the indicators, though downside momentum is slowing.

Let's look a bit closer at the indicators.

In this updated daily bar chart of ACIA, above, we can see that prices are below the declining 50-day simple moving average line, and the slow-to-react 200-day moving average line also is pointed downward. The daily On-Balance-Volume (OBV) line turned lower in early September and may have put in a low in early May. I used the word "may" because it won't take much selling to push the OBV line to a new low. Since early May the line is pretty much flat, telling us that buyers and sellers of ACIA are in balance.

In the lower panel of the chart is the 12-day momentum study, which shows (hard to see, actually) a bullish divergence since early March as momentum has made higher lows while prices made lower lows. The longer a bullish divergence goes, the odds increase for an upside move. It doesn't mean it has to happen, however. 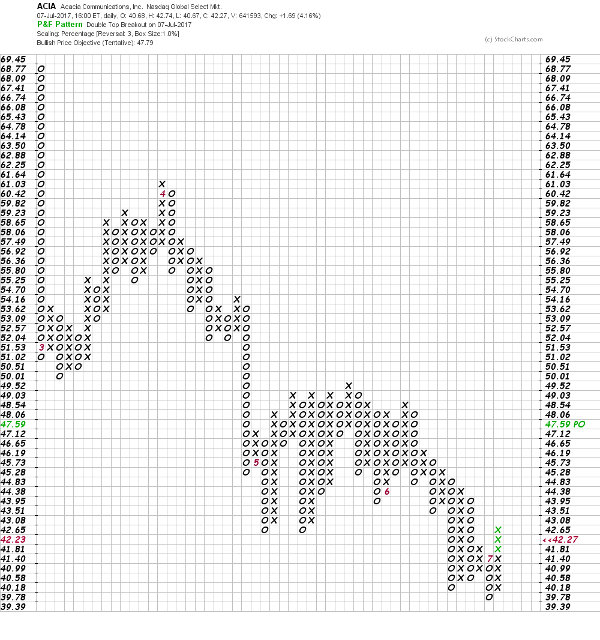 In this Point and Figure chart of ACIA, above, we can see the downtrend and the overhead resistance area. The current rally shows a potential upside price target of $47.59, but I think that is perhaps ambitious.

Bottom line: ACIA is in a downtrend with few signs of a turnaround.