"The outlook wasn't brilliant for the Mudville Nine that day." At least that's what we were told by Earnest Thayer in his 1888 classic, "Casey At The Bat." In reference to the Mudville fan-base, Thayer told us: "A straggling few got up to go in deep despair."

Over the last two or three weeks of June, investors behaved something like those fans. The outlook had certainly become mussed by prospects for escalating trade tensions, which in turn added pressure to the long end of the yield curve. Folks started to question the medium-to-long-term prospects for economic growth. They questioned the ability of global economies not only to grow, but also to produce desirable levels of consumer-level inflation. Those folks sold the marketplace as June expired. Then came Friday.

The Mudville Nine and their fans all looked forward to getting old Casey to the plate. I am reminded of another poem. In 1734, Alexander Pope wrote "An Essay On Man." The line, "Hope springs eternal in the human breast" is paraphrased by Thayer more than 150 years later in describing those fans who did not "get up an go."

That other group of market fans, those brave souls who stuck around, staged a rally on Friday. "Sell the rumor, buy the news?" Perhaps those are the ones who see that President Trump's initial tranche of tariffs on Chinese imports, while targeting 818 goods, selectively miss products commonly purchased by U.S. consumers. Perhaps investors were encouraged by the fact that there is still no date for the implementation of the that next tranche, which will target another 284 Chinese imports worth roughly $16 billion.

Overnight, global equities, as well as U.S. equity index futures, all traded comfortably in the green. Was the harsh impact of these tariffs upon the markets already priced in? Were technology shares simply oversold? Maybe the negative impact on these shares was more limited, or indeed more manageable than previously thought. Time will tell.

Investors anxiously look to the kickoff off "earnings season," as we'll hear from the major banks later this week. Earnings are historical. We expect to hear positives there. Second-quarter expectations have been heating up. As those ball fans waited for the Mighty Casey to step up to take his turn at bat, investors wait upon forward-looking comments that firms will have to make in conjunction with the data. This guidance will have to deal with the potential impact of these trade disputes.

Keep this in mind. I do admit that I can see a path where U.S. interests gain the upper hand in a "trade war." That path is however, fraught with danger, and could easily tilt the wrong way with any misstep or any misguided words. Remember, as mighty as he was, as much as his fans supported him, well... you know the rest. The Mighty Casey struck out.

A rising interest rate environment, potentially rising costs associated with a trade war versus China, and the threat imposed by the "Death Star" also know as Amazon (AMZN) , (an Action Alerts PLUS holding) were supposed to indicate the end of the line for old-school retailers. A funny thing happened in 2018. Some of these retailers did exactly what we talk about here in this column whenever market conditions become difficult. They understood. They identified. They adapted. Some of them are actually figuring out how to overcome.

Multi-stream retailers had a very nice first half. We were on top of that story here, and if you followed along, you did very well with such investments as Macy's (M) , and Action Alerts PLUS holding Kohl's (KSS) . If you read me often, then you know that I (we) made the appropriate sale in both of these names as target prices were approached, but hung on to roughly 50% partials in both names. I suspect some of you behaved similarly. What now? The threat from rising input costs still exists. Do we now seal the deal, and take our profits on the balance? Is is time to buy back what we sold higher? Do we just sit on our hands, and hope something lucky happens?

You know the answer. We lay out a plan. We act when levels are breached, thus protecting us from that very ugly creature that we occasionally find peering back at us from that rectangle on the wall directly above the bathroom sink.

One look at this chart of Kohl's (KSS) , and you are immediately reminded of the euphoric pop and subsequent skittishness seen in this name in response to earnings in May, and the news around that "family and friends" event. 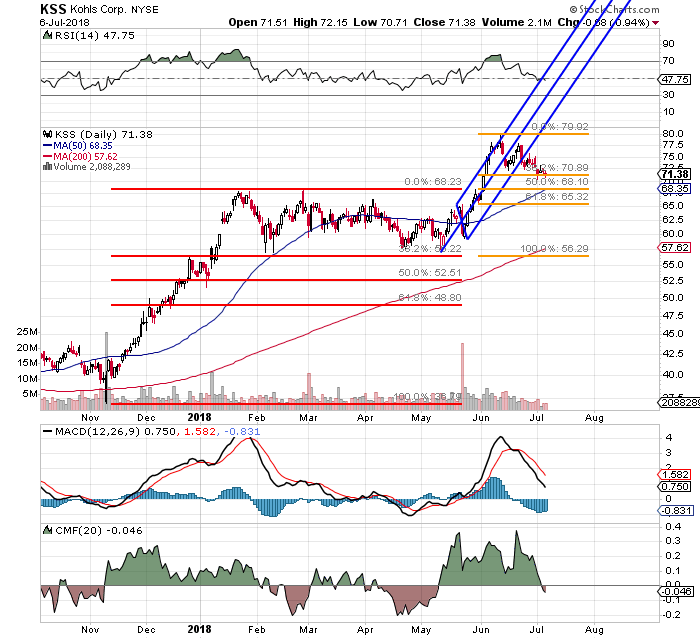 Our old $80 target was met in early June. One sees the unsustainability of the Pitchfork drawn at that time. So what now? Our old panic / replenishment point of $68 has not broken. That spot was not only serious resistance throughout the winter months, but is now where the name would see a 50% retracement of that move made in early June. That level also happens to be whee the 50-day Simple Moving Average resides. KSS reports August 21.

On Macy's (M) , we also have a stock that reacted very well to earnings and then came off of it's highs. In this model, our Pitchfork is not yet broken, and has to this point been respected. What is also easily readable here is the 50-day Simple Moving Average. That line also appears to have provided support for the stock since late February. 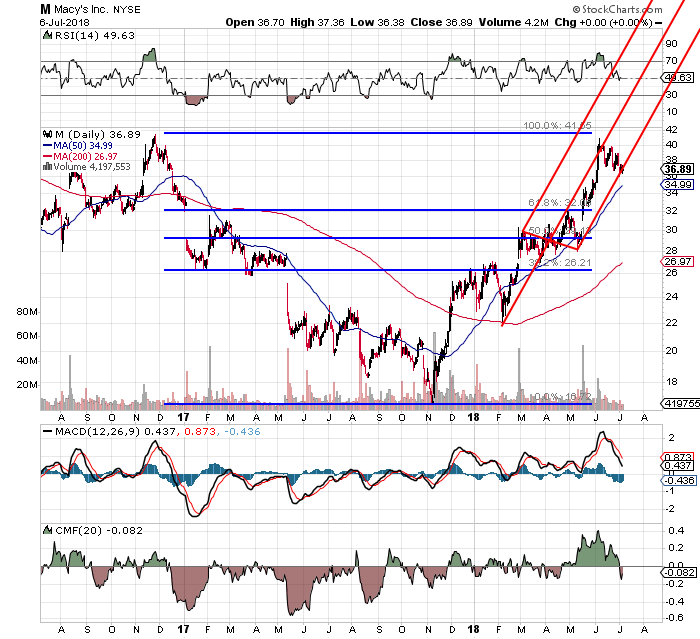 We are going to tighten the screws here in attempt to force movement -- and while doing so, separate the panic point from the point of replenishment, as there will likely be a knee-jerk (in my opinion) reaction should the $35 level crack. Like Kohl's, Macy's will report its numbers on August 21.

Get an email alert each time I write an article for Real Money. Click the "+Follow" next to my byline to this article.
TAGS: Investing | Global Equity | Consumer Discretionary | Consumer Staples | Economic Data | Consumer | Economy | Markets | Newsletter | Options | Politics | Stocks

GoodRx Stock Looks Ready to Be Priced Like a Generic Drug

The Rally in Hershey Foods Could Melt Away

Will the weeks leading up to Halloween help the stock?

The quarterly results from Best Buy and American Woodmark surprise to the upside on the bottom line, though revenue at the former fell from a year earlier.