Proofpoint (PFPT) has traded modestly higher over the past twelve months, but it is up significantly from a V bottom in early 2016. As gains have been harder to achieve in recent months, the underlying technical posture has weakened. I am not saying that PFPT is a sell, but it may mean we see a sideways trading range market over the intermediate term.

Let's visit with the latest charts and indicators to see if we can plot a course ahead.

In this daily bar chart of PFPT, below, we can see a rally from April to early June from near $70 to short of $95. Prices closed above the rising 50-day and the rising 200-day moving averages. PFPT has been testing the 50-day average line in recent days. The volume pattern shows a big surge in late April and then volume has diminished.

The daily On-Balance-Volume (OBV) line rises from April to early June, confirming the advance with signs of aggressive buying. From early June, the OBV has turned neutral. The Moving Average Convergence Divergence (MACD) oscillator crossed to a take-profits sell in early June and is close to crossing the zero line for a possible outright sell signal.

This weekly bar chart of PFPT, above, gives me mixed signals. Prices are above the rising 40-week moving average line, so we know the trend is up. The overall price action looks like a measured move pattern. There is a first leg from $25 back in early 2014 to a $75 peak in late 2015. A steep decline interrupts the advance. After the break/correction, prices resume with a second leg from $40 to $90. Both legs travel $50.

This chart pattern is relatively rare, and it is typically noticed after the fact, so it doesn't aid much in giving a price forecast. Looking at the rest of the chart and indicators, we can see how the weekly OBV line has turned lower in recent weeks and the MACD oscillator has narrowed towards a possible crossover and fresh take-profits signal. 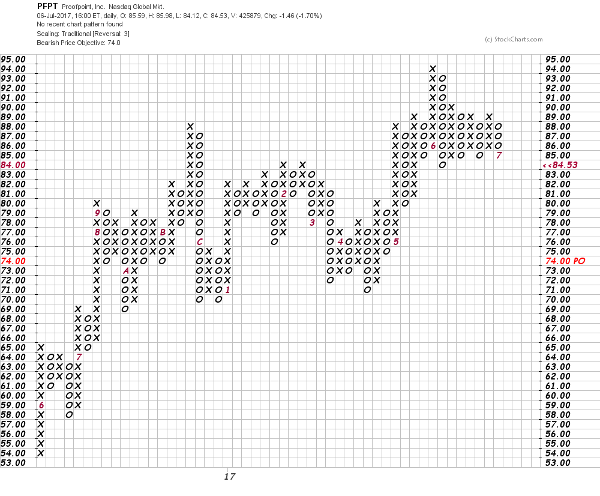 In this Point and Figure chart of PFPT, above, we can see a potentially bearish consolidation pattern. A rally to $90 is needed for a minor upside breakout, but a decline to $83 could set into motion weakness to $74 based on this charting technique.

Bottom line: After the measured move by PFPT (noted above) a period of sideways price action should be expected over the intermediate term. In the near-term, we could see some follow-through strength above $90 and some spillover weakness below $83.