Banco Santander S.A. ADR (SAN) bottomed out in early 2016 and has nearly doubled from its nadir, but overhead resistance from 2015 and slowing momentum may mean that long-term investors will need to be patient in the weeks and months ahead.

Let's check out the latest charts and indicators and see what strategy makes sense in light of the price action.

In this daily bar chart of SAN, above, we can see that prices have successfully tested the rising 50-day moving average line several times over the past five months. Sometimes the "tests" were just a "touch", but in the past month SAN tested the average line several times. Over the past two months, SAN has stalled a number of times on approach towards $7.00, creating a horizontal resistance line.

At the same time we can also see that SAN has been making higher lows since mid-May. The pattern we just described may be an ascending triangle. This normally bullish continuation pattern would suggest an upside breakout very soon, but the volume pattern gives me doubts. Typically, the volume diminishes through a triangle as the trading range gets tighter and tighter.

I don't see that pattern in the chart above. The daily On-Balance-Volume (OBV) line has been creeping higher the past two months, which is a positive. In the lower panel is the 12-day momentum study, which shows a bearish divergence, with lower peaks versus the equal price peaks.

In this weekly bar chart of SAN, above, we can see that prices are above the rising 40-week moving average line. Look to the left side of the chart and you can see a previous support zone in the $7.00 to $7.75 area. Prices held in this area before slumping to new lows. The area of support can reverse roles and become an area of resistance.

The weekly OBV line has been pointed up from its November low. But the trend-following Moving Average Convergence Divergence (MACD) oscillator has crossed to a take-profits sell signal. 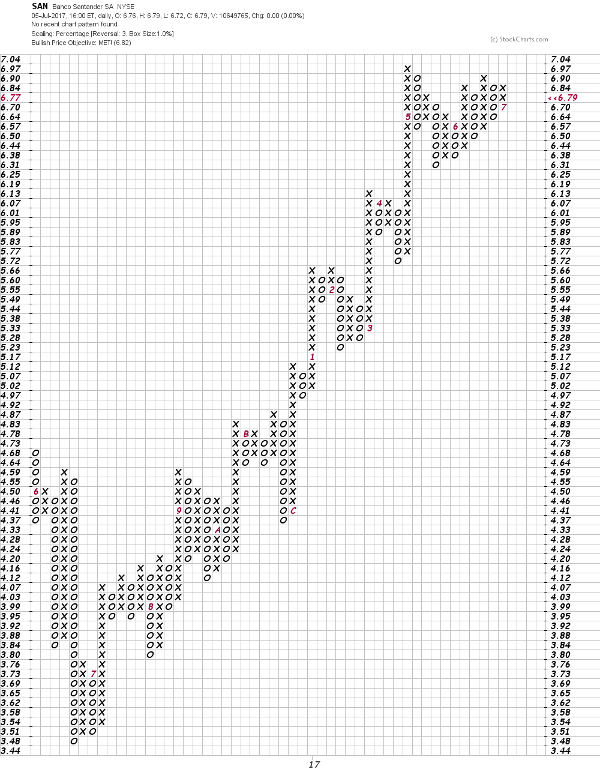 In this Point and Figure chart of SAN, above, we can see both the impressive recovery from the 2016 low and the recent triangle formation. This chart shows both the upside breakout point and the breakdown point. A trade at $7.04 would be a breakout on this chart and a decline to $6.64 would be a minor breakdown.

Bottom line: if you read my observations above you would probably say that the signals on SAN are mixed. The trend is up, but the testing of the 50-day line so much has me a little concerned. A close above $7.05 will be bullish but a close below $6.30 will be modestly bearish.

Get an email alert each time I write an article for Real Money. Click the "+Follow" next to my byline to this article.
TAGS: Investing | U.S. Equity | Financial Services | Markets | How-to | Risk Management | Stocks