KB Home (KBH) was last visited in the middle of May where I wrote, "KBH is pointed down and we find few technical reasons to buy it. A test of the $22 area could be the next short-term target." The decline in KBH has slowed down but we still see lower highs on the chart.

Let's pay another visit to the charts and indicators to see if there are any new clues.

In this daily bar chart of KBH, below, we can see that prices made a peak in January and have given back a large part of its gains from September. Prices closed below the rising 200-day moving average line in late April and failed at the underside of the average line in early May and June.

Prices are trying to hold above the 50-day average line but its slope is still bearish.

The daily On-Balance-Volume (OBV) line shows a peak in January with prices and then a decline into early May, which tells us that sellers were more aggressive. Any recovery in the OBV line in the past two months can only be considered very modest.

In the lower panel is the 12-day price momentum study which shows improving momentum readings from February. This is a bullish divergence when compared to the weaker price action but it has yet to generate a turnaround to the upside.

In this weekly bar chart of KBH, below, we can see how the rising 40-week moving average line acted as support in 2016 and 2017. With the break of the 40-week average this year the role of the line has reversed to resistance.

The weekly OBV line rises strongly until this January and then slowly weakens. This suggests that there was good buying and accumulation for two years and not much liquidation. This could be interpreted as bullish in that longs have stayed long but it could be viewed as potentially bearish in that many longs are sitting with losses.

In the lower panel the Moving Average Convergence Divergence (MACD) oscillator is close to a bullish cover shorts buy signal.

In this Point and Figure chart of KBH, below, we can see a potential upside price target of $32.49 but a trade at $28.36 is needed for a double top breakout. 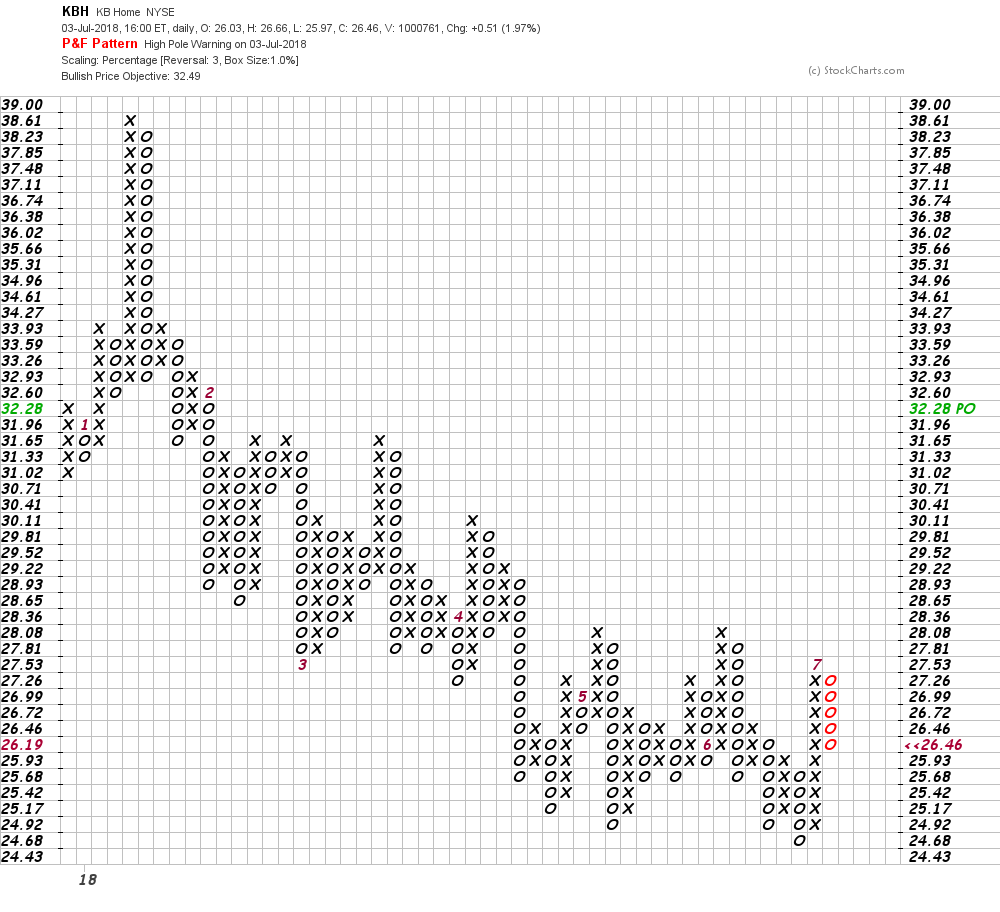 Bottom line: KBH may have stopped declining but more aggressive buying is needed to get me to suggest a down payment on this home builder.

The Doctor Is In and Probably Isn't Going Away

Copper has had a nice run, and the likelihood the worst of the pandemic soon could be behind us could mean increased consumption ahead.

Avoid the long side of LOW until fresh support develops.