Equity index futures are trading higher overnight, on top of European markets that opened higher themselves. Can you trust the early green on the screen today? Do you believe your toddler after having caught them in several lies? Oh, you want to. I understand that. You also know better, as is the case on any given morning. There is still too way much out there that has to be determined. Volatility is the order of the times. So, on we roll.

Earnings season is only a week out. The Energy sector has been a 2018 outperformer so far. Huzzah. market prices for black gold are screaming. Oh, look, the heating oil guy is here. What a surprise, during a heat wave. Revenue for the second quarter is expected to further support this momentum. We'll hear from the banks early in the season (as usual). These events, I would hope, will offer at least a chance to reposition investments across the space after a June that did did not work out as planned for these names -- or at least not the way I planned.

When considering the broader equity marketplace, keep in mind that what looks like a series of declining highs on a three week chart...

...might also look like as a series of higher lows year to date. Oh, and if you ask me, it's all about that base. Hmm.

Tomorrow, the Trump administration, at least according to plan, will impose tariffs on $34 billion worth of imported Chinese manufactured goods. The president has threatened to increase the ante should China respond to these initial tariffs with a secondary tranche of $200 billion, that could be followed by a tertiary tranche of tariffs, also amounting to $200 billion. Oh, joy. By the way, China has already threatened to retaliate on Friday dollar-for-dollar despite already having imposed decisively lopsided tariffs on U.S. imports in China's favor that have been in place and left unchallenged for many years. At stake is also the protection of U.S. intellectual properties, which may actually be a bigger deal than trade deficits.

While it does not take a genius to recognize the inequities that the administration is attempting to correct, many will question the methods used. This game of chicken may hurt China far more than it does the U.S. Still, hurting less than your adversary does not make one a winner, and outcomes make investing in equities likely to be impacted far riskier.

On top of this, the spread between the U.S. treasury two-year and 10-year notes yield compressed to less than 30 basis points over the holiday. You do not have to look very far for a reason that our banks have underperformed. Will, the curve invert? The Fed's Minutes are due this afternoon.

On one hand, with the Atlanta Fed's GDPNow model running at 4.1% for the second quarter, it becomes difficult to imagine the FOMC hitting the brakes on policy normalization. That said, the Treasury Department could improve the situation by focusing issuance of debt on the long end. I have pushed for this in the past. These guys aren't stupid. Right? We'll see. Tomorrow, will not only be a big day in terms of trade policy, but will also loom large for second-quarter GDP modeling, as both June Employment data and numbers representing May's balance of trade become available.

Ugly over a month or so? Tech, Industrials, Financials and Materials. With the exception of those in the financial space, the other three sectors are all where potential victims of a trade war would reside. Especially at risk are many of the market's high fliers, not just over the earlier months of 2018, but over several years. Semiconductor stocks, and the firms that service that industry, realize sizable portions of their revenue from mainland China.

I won't -- but we could keep doing this. The industry is overly dependent on China's growth engine. As I have relayed to you in this column and on social media, I have systematically reduced my own exposure to these beloved names as certain levels have been hit, and my own trading rules have prevented several disasters. This brings me to one name that when I left on my vacation, had still avoided hitting these trigger points. This morning, my hand may be forced.

My panic point / point of replenishment for Micron had been $52. The level had been flirted with last week, but by Tuesday morning, one might have thought that MU was out of the woods.

Then came news that a Chinese court had ruled against the firm in a patent infringement case brought by Taiwan's United Microelectronics (UMC) . This ruling forced a drop in the share price of MU from a high of $54.79 to a low of $50.10 in Tuesday's shortened regular session. The shares closed at $51.48, and are trading around $51 this morning.

The problem is that the Fuzhou Intermediate People's Court of the People's Republic of China has barred Micron from selling particular DRAM and NAND chips in China, and that China accounts for about half of Micron's revenue. The oddity of this news was that it was released by United Microelectronics on Tuesday. Micron, at the time, was left waiting on official documentation from the court, unable to comment. 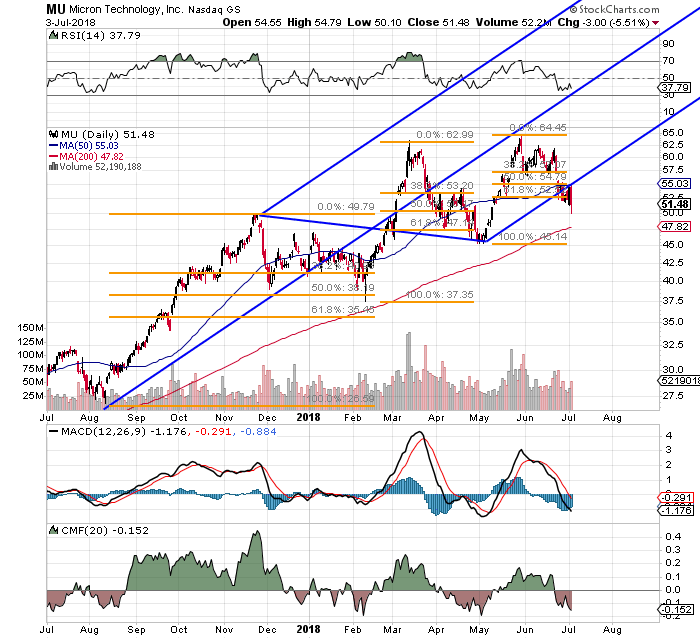 Yes, we have a broken Pitchfork on our hands caused by a news event. There is some possibility that MU has become a political football. Yes, I (we) had the chance to sell some at better prices. Still, most of us are likely playing with varying levels of profit on this one, unless one entered the name in the short term.

I can't tell you what to do, but I can tell you what I am going to do. Being that I was out of the loop, and missed the sell signal on Tuesday, I am dropping my panic point to $51. The stock opens below that spot, I puke 25% of my holdings. See that 20-day simple moving average that has held all year (around $48)? That's where I sell another 25%, if I have to. My goal? To buy these shares back, of course. But where?

See that $45 level? That spot served as support in early May, and twice as resistance around the new year. My guess is that the algos will see that too. The stock holds above $51? Then I sit on my hands. But with trade-related news imminent by tomorrow, I am not holding my breath.

Here's another idea. The firm reports next on Sept. 19. That's a long way off. Late Tuesday, options markets were still paying $1.57 for September 21 $60 calls. If one can still get $1.35 or so for those this morning, I think the sale of covered calls could come in pretty handy as far as reducing basis here, or you could whine about your predicament. Hey, just a kid with an idea.