In our last review of Take-Two Interactive Software, Inc. (TTWO) at the end of May, we suggested that traders should take profits. With the benefit of hindsight, we can see that prices made a second attempt to best $80 and have since retreated to test the rising 50-day moving average line.

In this daily bar chart of TTWO, above, we can see that after TTWO doubled from its $40 low last July it has run into some selling pressure. Prices have pulled back to the rising 50-day moving average line with a retest last week. The OBV line has turned to the downside (noted above), telling us that sellers of TTWO have turned more aggressive, with heavier volume be traded on days when TTWO has closed lower.

In this weekly bar chart of TTWO, above, we can see how prices got too far above the rising 40-week moving average line. The nearest chart support looks like it is down around the $60 area. The weekly OBV line turned lower in June and the weekly MACD oscillator has narrowed towards a possible take profits sell signal. 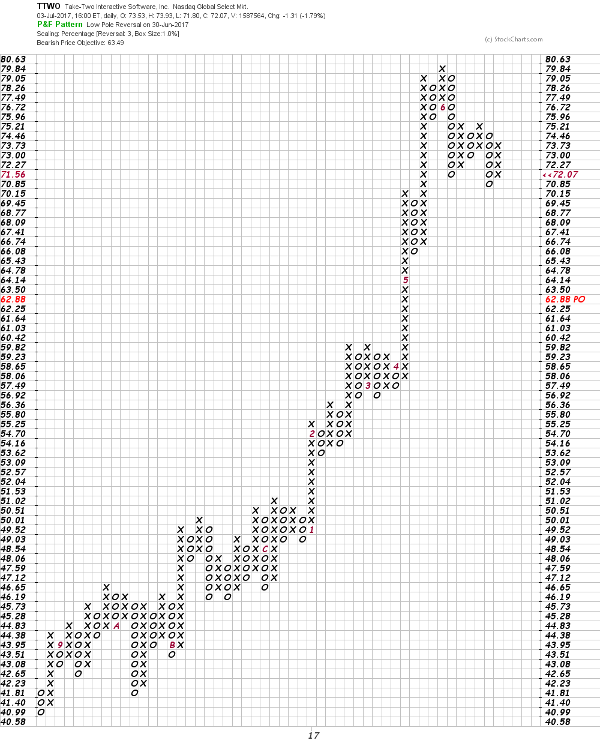 In this Point and Figure chart of TTWO, above, we can see that the minor trend turned down when the $71.56 entry was broken. The distribution from late May suggests a possible decline or pullback to around $62.88. It will take at least a move back up to $75.96 to turn the chart more positive.

Bottom line: TTWO could bounce in the near-term, but the recent pullback to the rising 50-day moving average line looks like isn't over just yet. More downside probes are anticipated. A close below $70 could precipitate a deeper decline to around $60 in the weeks ahead.

Jim Cramer: These Companies Are Here to Thrive, Now and Post-Pandemic

And here's how they can do it, too: with lots of ingenuity and some good luck.