Activision Blizzard Inc. (ATVI) was noted in our June 9 piece on Real Money -- 15 Tech Stocks Vulnerable to a Pullback (Part 1) where we said, "In this daily bar chart of Activision Blizzard, we can see prices are above the rising 20-day and the rising 50-day moving averages. The 20-day might be too far above the 50-day line, but it has not yet begun to narrow. The pace of volume looks to be heavier in May than April, but overall I would not say that volume has expanded from the December low."

Since June 9, ATVI has made a small double top formation in the $60-$62 area and closed below the rising 50-day moving average line. But there are more technical clues to cover in the charts below.

In this updated daily bar chart of ATVI, above, we can see the two attempts above $60 and the trough between the two peaks at $56. The weak close on Monday may have been enough to complete this small top formation, or we may need a close below $56.

The daily On-Balance-Volume (OBV) peaked in early June and made a slightly lower second peak later in the month, as prices made a slightly higher crest. The new decline in the OBV line tells us that sellers have become more aggressive, which has not been the case since November.

The trend-following Moving Average Convergence Divergence (MACD) oscillator makes a high in March and an equal high in June, even though price rises significantly from March to June. This oscillator is now near the zero line, and crossing it would be an outright sell signal.

This updated weekly bar chart of ATVI, above, gives us some clues we didn't have a few weeks ago. Looking at the price chart, we can see that prices showed the largest distance above the rising 40-week moving average than any time in the past three years.

The weekly OBV line shows a triple top since late 2015 and the MACD oscillator on this timeframe is crossing to a take profits sell signal. 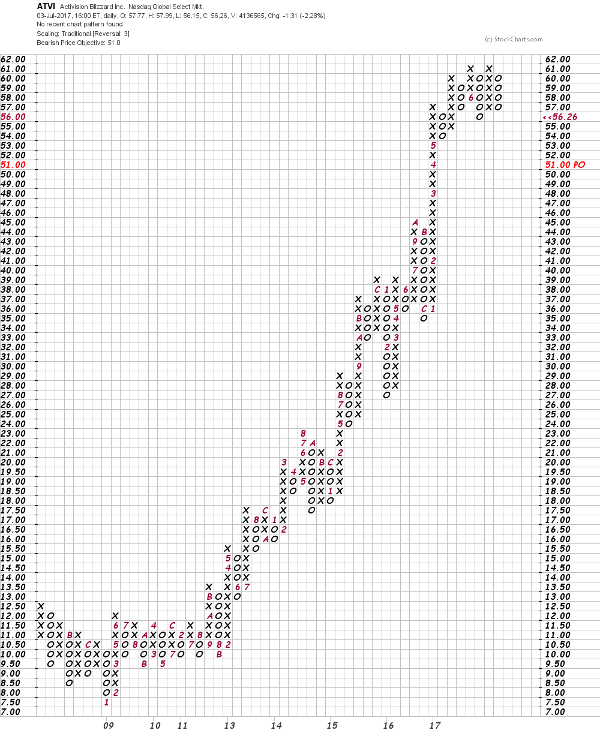 In this Point and Figure chart of ATVI, above, we can see that prices have made a huge mark up from below $10 to $61. Recently, ATVI has made three rally attempts (columns of Xs) and three down attempts (columns of Os). A decline to $55 will break minor support around $56 and open the way for declines to $51 on this chart, but $50 is chart support on the weekly bar chart.

Bottom line: it looks like ATVI can decline/pull back further to $51-$50, but bearish short-term sentiment could mean we bounce a little first. It will take a close above $62 to turn the chart bullish.

Get an email alert each time I write an article for Real Money. Click the "+Follow" next to my byline to this article.
TAGS: Investing | U.S. Equity | Technology | Markets | How-to | Jim Cramer | Stocks

The charts of the maker of data storage devices are starting to send a few positive signals.

The charts of the online meeting provider show more risk in the shares than two or three weeks ago.

Rate cuts and other Fed actions are motivating some tech companies to raise funds or refinance existing debt.