Corning Inc. (GLW) was reviewed in the beginning of the year where I was bullish, "Traders and investors who are long GLW should continue to hold and add to longs if they want. Risk a close below $31 now and look for gains into the $38-$40 area."

Prices stopped in their tracks at $35 by the middle of January and gapped lower to reach our sell stop in early February. GLW has remained on the defensive so a fresh look at the charts is needed. GLW declined into the $27-$26 area and subsequent bounces have been less than impressive and the indicators are not suggesting a rally in the weeks ahead.

Let's do a bottom up review.

The daily On-Balance-Volume (OBV) line has improved a little from late May but the pattern since January is basically neutral.

The trend-following Moving Average Convergence Divergence (MACD) oscillator has turned down to a take profits sell signal in the middle of June and is poised to move below the zero line for an outright sell signal.

In this weekly bar chart of GLW, below, we can see a bearish set-up with the indicators. Prices are below the declining 40-week moving average line. The $26 area looks like support but a break of that area could precipitate a deeper decline to around $22.

The weekly OBV line has been moving lower all year and suggests that sellers of GLW have been more aggressive.

The weekly MACD oscillator signaled a cover shorts buy signal at the end of May but the two moving averages that make up this indicator are quickly turning down again.

In this Point and Figure chart of GLW, below, we can see a distribution pattern with a potential downside price target of $18. 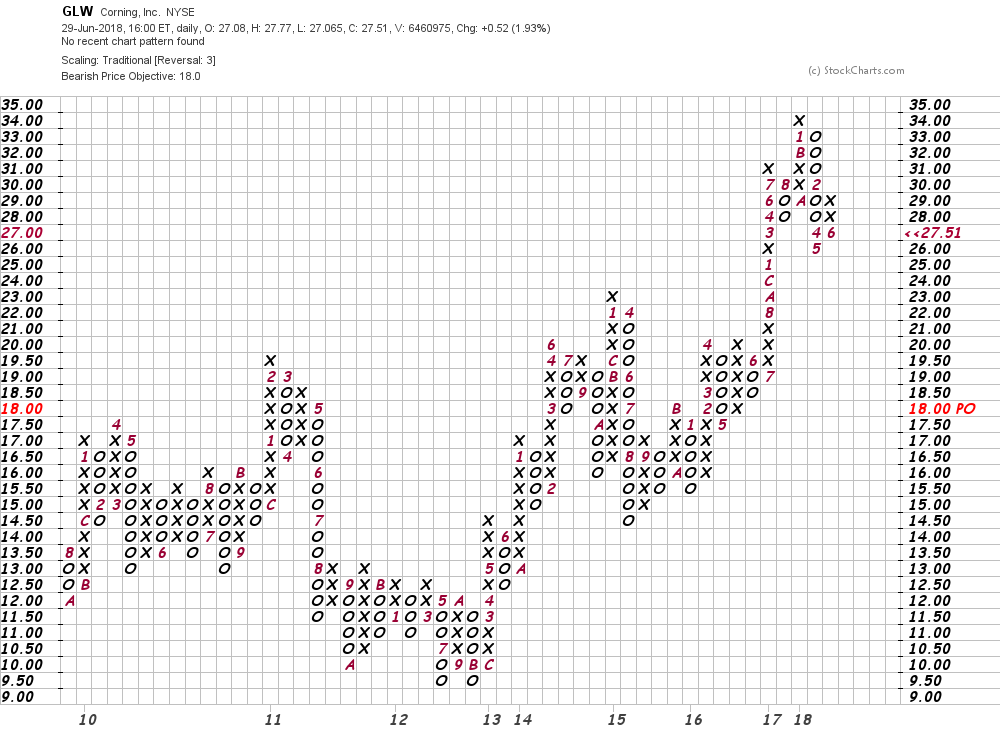 Bottom line: GLW may continue to hold above $26 and attempt an upside move at some point but the charts and indicators suggest that the downside is not over and that a deeper decline to $22 or even $18 is possible.

Get an email alert each time I write an article for Real Money. Click the "+Follow" next to my byline to this article.
TAGS: Investing | U.S. Equity | Industrials | Futures