If there's a silver lining to the reduced long-term revenue and EPS growth targets that Cisco Systems Inc. (CSCO) just provided, it's that markets weren't bothered by the numbers. Cisco closed up 1.4% on June 28, the day the outlook was given, slightly beating the Nasdaq's 1% gain.

That, of course, has much to do with how cheap Cisco shares are: With the networking giant trading for less than 13 times its fiscal 2018 (ends in July 2018) consensus EPS estimate even after a giant Nasdaq rally, markets aren't counting on anything more than modest earnings growth in the coming years.

But for those hoping that Cisco's aggressive moves to grow its software and services exposure will pave the way for the company to return to double-digit earnings growth, its targets have to be considered disappointing, a harsh reminder of just how much of a headwind Cisco's exposure to hardware franchises facing major long-term pressures stands to be even as its software and subscription revenue swells.

At its 2017 analyst day, held at the annual Cisco Live partner conference, Cisco forecast it would see just 1% to 3% annual revenue growth, and "mid-single digit" annual EPS growth over the next three to five years. The outlook was provided during CFO Kelly Kramer's portion of Cisco's analyst day presentation, and can be found in Kramer's presentation slides.

The growth targets are below the ones Cisco issued in late 2013, when it forecast 3% to 6% revenue growth, and 5% to 7% EPS growth, for the following three to five years. Assuming Cisco hits a fiscal 2017 EPS consensus of $2.38, the company's compound annual EPS growth since fiscal 2013 will have been around 4%, slightly missing its target range.

Also: In spite of its software/services shift, Cisco is only forecasting its margin growth will be flat to positive. On the bright side, the company does promise to keep returning over half of its free cash flow (FCF) to shareholders.

The biggest culprit behind Cisco's subdued outlook: The company only expects its "infrastructure platforms" business -- it covers switching, routing, Wi-Fi and server products, and currently gets just 14% of its sales from software -- to see roughly flat revenue growth. In addition, Cisco's "Other" businesses, which include things like conferencing and cable/telco video hardware, are expected to decline at a mid-single digit clip.

Cisco's main problem: Its "infrastructure platform" and "other" offerings account for over two-thirds of its current product sales, which in turn account for 74% of its total revenue. Moreover, much of the 26% of revenue that comes from services still involved support and maintenance contracts for the aforementioned products.

But given the impact of this push-out in recent quarters, we might be looking at just a 2% revenue growth difference in the short-term, and -- as various software businesses largely transition towards subscriptions -- possibly less in the long-term. It's also worth keeping in mind that delivering 1% to 3% sales growth would be a clear improvement over near-term sales trends: Cisco's revenue fell 1% annually in the April quarter, and has been guided to drop 4% to 6% in the July quarter.

A run-down of the major secular challenges faced by Cisco's hardware operations provide context to the company's sales outlook. A few of the big ones:

Amid all of these challenges, Cisco has been doing some pretty smart things. Launching networking software solutions such as the ACI SDN platform, its Tetration data center analytics software and (most recently) its DNA platform for automating office network functions that IT admins have to do manually serve to better differentiate the company's hardware platforms amid growing threats. They also grow the amount of long-term revenue Cisco can produce from those hardware clients that stay loyal, extra spending that clients can justify due to benefits such as lower IT operations costs and better security. 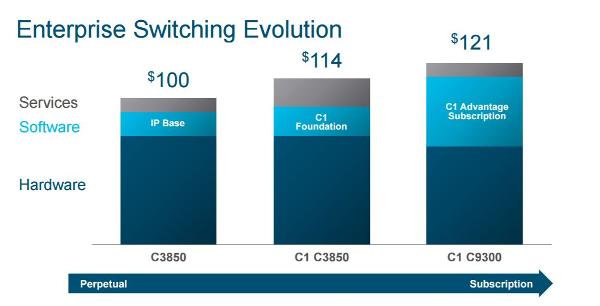 An example of how Cisco expects software subscriptions to grow the revenue opportunity for a switching product line.

Cisco is also wisely using M&A to expand into adjacent software and services markets that complement its existing product line: Examples include its $3.7 billion purchase of leading app performance monitoring (APM) software firm AppDynamics and its $1.4 billion-plus purchase of leading IoT connectivity management service provider Jasper Technologies. And its efforts -- both via M&A and organic investments -- to grow its exposure to a security market that remains a strong point for IT spending -- have generally paid off.

The net result of all these moves, however, may simply be to allow Cisco to deliver modest organic growth in the coming years. That might admittedly prove a better outcome than what some IT peers, such as HPE and IBM Corp. (IBM) , could be facing given their own secular pressures. But those expecting something better still might end up disappointed.