Following some corporate announcements, Novartis AG (NVS) is trading higher in pre-market action Friday. Let's check the charts and indicators of this drugmaker to see if this will generate a sustained reversal to the upside.

In this daily bar chart of NVS, below, we can see that the price of NVS has suffered since the end of January. Prices are below the declining 50-day simple moving average line as well as the bearish 200-day average line. The daily On-Balance-Volume (OBV) line did not peak and turn lower until April, but its decline tells us that sellers have been more aggressive. On the positive side, the 12-day price momentum indicator shows a bullish divergence from February. The momentum indicator makes higher lows from February to May to June while prices make lower lows. This divergence tells us that the pace of the decline slowed from February. A slowing decline happens when buyers come in on a scale-down. A bullish divergence can foreshadow a rally or reversal.

In this weekly bar chart of NVS, below, we have mixed signals. NVS has been trading below the declining 40-week moving average line for several months, but prices are down in a potential support area from late 2016. The weekly OBV line has been in a decline from the beginning of 2018, but the pattern over the past three years is not positive. In the lower panel is the 12-week price momentum study, which shows that downside momentum has slowed -- a positive.

In this Point and Figure chart of NVS, below, we can see (left scale) that there is good support or at least volume from $72 down to $66. On the upside, the chart does not really improve until prices rally back to $84. 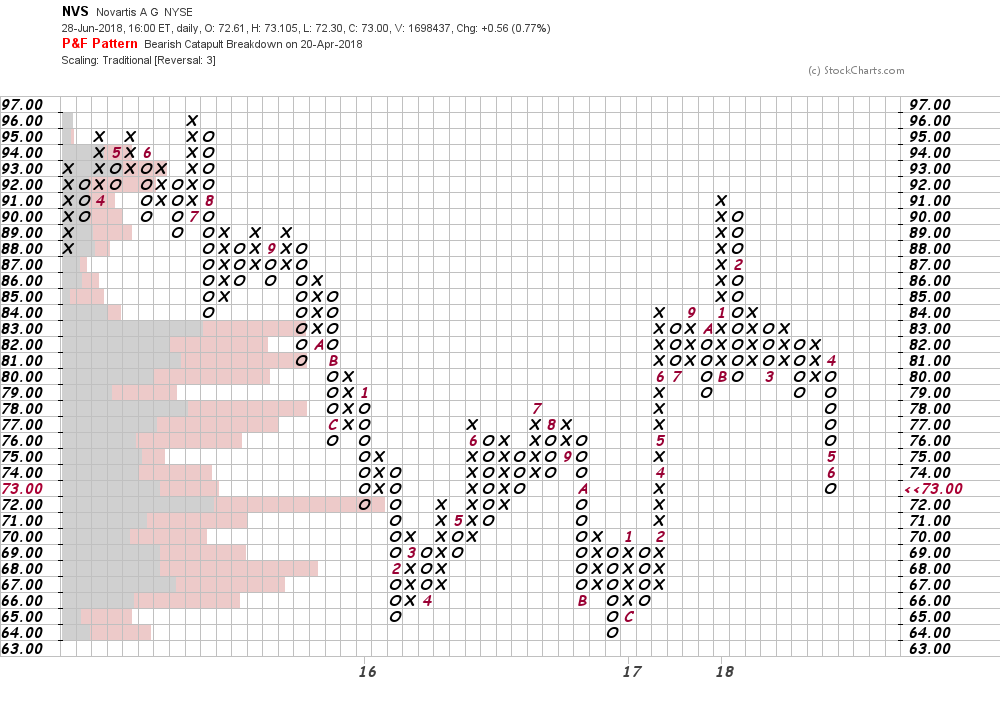 Bottom line: NVS probably will make a move to the upside today and we may have made a low, but we are a long way from a bottom and a sustained move higher. A close above $76 will break the bearish 50-day moving average line, and that will be a start in the right direction.

Get an email alert each time I write an article for Real Money. Click the "+Follow" next to my byline to this article.
TAGS: Investing | U.S. Equity | Healthcare | How-to | Risk Management | Stocks

I'm Buying Arcturus Therapeutics Stock and Here's the Reason Why

My COVID vaccine eligibility actually began about a week before my symptoms began.

The upgrade got my attention, but positive-looking charts pushed me over the edge.

Jim Cramer: For This Pandemic, and the Next, There Are Several Stocks I Like Now

There's an undercurrent that will grow over time, basically what tailwinds from the pandemic will stay with us after the pandemic's over.

The Doctor Found Something Amiss on the Charts of Teladoc

The AZN affair exposes the seedy underbelly of drug manufacturing, and the COVID-19 vaccine is certainly a drug.