This commentary originally appeared on Real Money Pro on June 29. Click here to learn about this dynamic market information service for active traders.

Generac Holdings Inc. (GNRC) became a really hot stock from late in 2012 through early 2014, after Hurricane Sandy knocked out power to wide sections of the East Coast.

Sales and profits from its core power-generation products surged. The stock ran from under $19 to north of $62. That became a hard act to follow as calmer weather, along with few power outages, led customers to ease back on emergency preparation expenses.

Generac's GAAP earnings per share dropped from about $2.50 in both 2013 and 2014 to only $1.12 in 2015. Management did a good job controlling expenses, though. Revenues have been rebounding and appear on track for an all-time record this year. 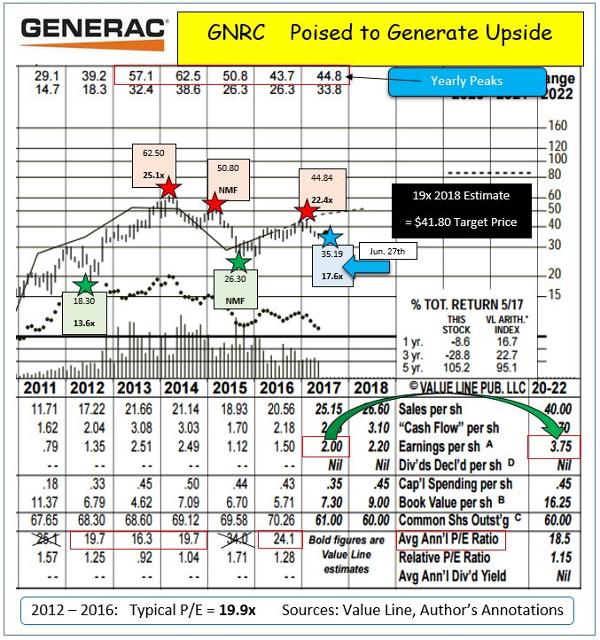 Generac only has traded publicly since February 2010. Based on past history GNRC might garner about a 19 times multiple on a normalized basis. Applying that to next year's estimate would support an 18-month target price close to $42.

That goal might prove too conservative. Generac carved out annual highs of at least $43.70 during each of the past five years, including 2017 year to date. 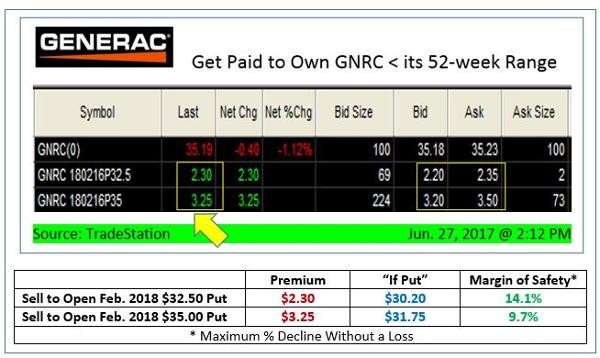 Those entry points provided margins of safety of 9.7% to 14.1% versus GNRC's trade inception price of $35.15. The 15-month chart below clearly shows that owning Generac below $32 was a continuously winning position over that entire time frame. 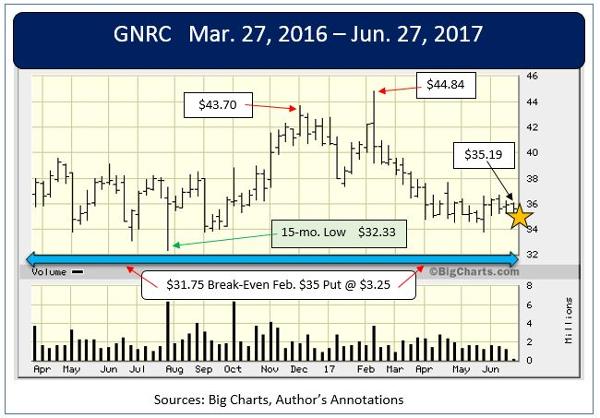 GNRC looks fine using standard accounting. It appears even more appealing if you lean toward accepting those non-GAAP projections.

At current prices, GNRC represents a decent value for outright purchase. It offers generous put premiums for those seeking even cheaper entry points.

Buy some shares, sell some puts or consider doing both.

Get an email alert each time I write an article for Real Money. Click the "+Follow" next to my byline to this article.
TAGS: Investing | U.S. Equity | Industrials | Stocks | Options