We last commented on Raytheon (RTN) at the end of February, where we concluded that, "RTN is in a strong uptrend and may not dip all that much, so you may have to buy strength. If there is any pullback, support is likely to be encountered around $150. Traders should risk below $145 and investors should risk below $140; $185 and maybe $200 could be seen by mid-year."

Now that we have reached the middle of the year and our ambitious price targets have not been reached we need to take a fresh look at the charts and indicators.

In this updated chart of RTN, below, we can see that support was encountered for RTN around $150 in late March and early April when it pulled back. Prices subsequently resumed their rise but the pace of the advance slowed.

Now turn you attention to the bottom of the chart with the 12-day momentum study. Notice the lower highs in this indicator from February to May to June. Momentum was slowing even as prices made higher highs in the same time period. This is a bearish divergence and can foreshadow a sideways market or even a decline (depending on other factors of course). RTN is still above the rising 50-day moving average and the rising 200-day moving average. The trend is still up but these are lagging indicators.

The daily On-Balance-Volume (OBV) line in the middle panel has leveled off this month suggesting that buyers of RTN are not as aggressive.

In this weekly bar chart of RTN, below, we can see that prices are comfortably above the rising 40-week moving average line. The weekly OBV line moved up strongly from early 2016 but it may have made a peak in the last six weeks or so. In the bottom panel is the Moving Average Convergence Divergence (MACD) oscillator, which is poised to cross to a take profits sell signal.

In this Point and Figure chart of RTN, below, we can see a very impressive climb. Prices are still pointed up in a column of X's and it may take a decline to $157.05 or lower to weaken this chart. Despite this strong looking chart we can still determine where a trend line break might occur. This level might be $152 if my ruler is straight. 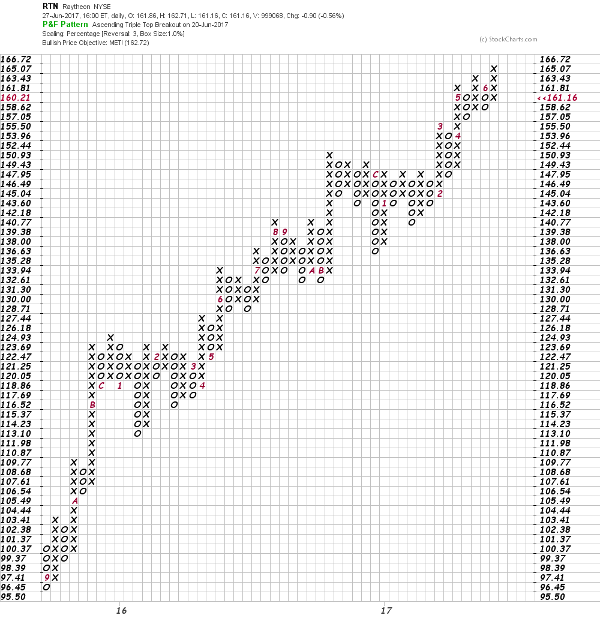 Bottom line: With the broad market looking more vulnerable over the past three weeks it would be prudent in my mind to raise sell stops. The levels I would focus on to reduce my exposure are $156 and then $152.

Get an email alert each time I write an article for Real Money. Click the "+Follow" next to my byline to this article.
TAGS: Investing | U.S. Equity | Transportation | Industrials