As a Walmart long, I'm pleased that the company isn't considering a bidding war with Amazon. Whole Foods is already trading at 34 times trailing earnings; if Walmart were to place a competing bid for $16 billion, that might be enough to get the deal done.

Or, Walmart could consider purchasing Sprouts Farmers Market Inc. (SFM) instead. Sprouts' market capitalization is just over $3 billion and its valuation -- at 28 times trailing earnings -- is more reasonable than Whole Foods.

After the news hit, Sprouts became oversold, according to its RSI (relative strength index) indicator (shaded yellow). The stock fell beneath its 50-day (blue) and its 200-day (red) moving averages, though it has managed to climb back above the latter. 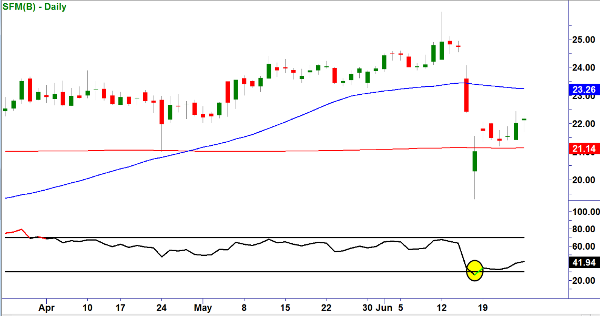 Whole Foods is the much larger company, generating $15.86 billion in annual revenue vs. Sprouts' $4.18 billion. However, when it comes to selling the products of these respective companies online via Amazon and Walmart, those revenue figures may be irrelevant.

Consider the difficulty that Starbucks (SBUX) is having with customer pickups of online orders. Now imagine much larger orders, such as an entire week of groceries, being placed by a much, much larger customer base, such as Amazon's or Walmart's.

Picking up these orders now becomes a logistical nightmare, and the easiest solution is delivery. In this scenario, the fact that Whole Foods has more locations than Sprouts Farmers Market becomes a moot point. No physical location could handle the crush of humanity that would result from the overwhelming number of pickup orders.

While Sprouts Farmers Market presents a much cheaper option for Walmart, there is another alternative. Maybe Walmart doesn't need to buy any company. Remember, Walmart already sells groceries. It simply could add more organics to its mix and duplicate whatever delivery system Amazon employs.

Let Amazon blaze the trail, and simply follow the path.

Get an email alert each time I write an article for Real Money. Click the "+Follow" next to my byline to this article.
TAGS: Investing | U.S. Equity | Consumer Staples | Technology | Consumer Discretionary | How-to | Mergers and Acquisitions | Stocks