Two well-respected analysts think Apple (AAPL) will be more flexible with its iPhone pricing this year, and they have their reasons.

On Tuesday, Morgan Stanley's Katy Huberty forecast Apple will assign an $899 starting price to the 5.8-inch iPhone X successor that's due to launch this year, while charging $100 more for a 6.5-inch model. She also forecast (in three base-case scenarios) that the 6.1-inch, LCD-based iPhone that's widely to arrive will feature a starting price between $699 and $769.

For his part, Apple analyst Ming-Chi Kuo thinks the 6.1-inch iPhone, which unlike the iPhone 8 and 8-Plus is expected to support Face ID and feature an edge-to-edge display, will have a $600 to $700 starting price. He cites a cheaper display, a lack of 3D Touch support and the use of a single-lens rear camera as reasons why Apple will price the phone aggressively.

Huberty and Kuo appear to be making educated guesses as to how Apple will price its 2018 iPhones, rather than relaying information from sources. However, it's not too hard to understand why Apple could choose to be more lenient with its iPhone pricing in the fall of 2018 relative to the fall of 2017.

The most clear-cut reason: iPhone volume growth has been pretty sluggish, as expectations of an iPhone X-driven "supercycle" failed to pan out. Apple's iPhone unit sales totaled 129.5 million between the company's December and March quarters, an increase of less than 1% from the year-ago period. 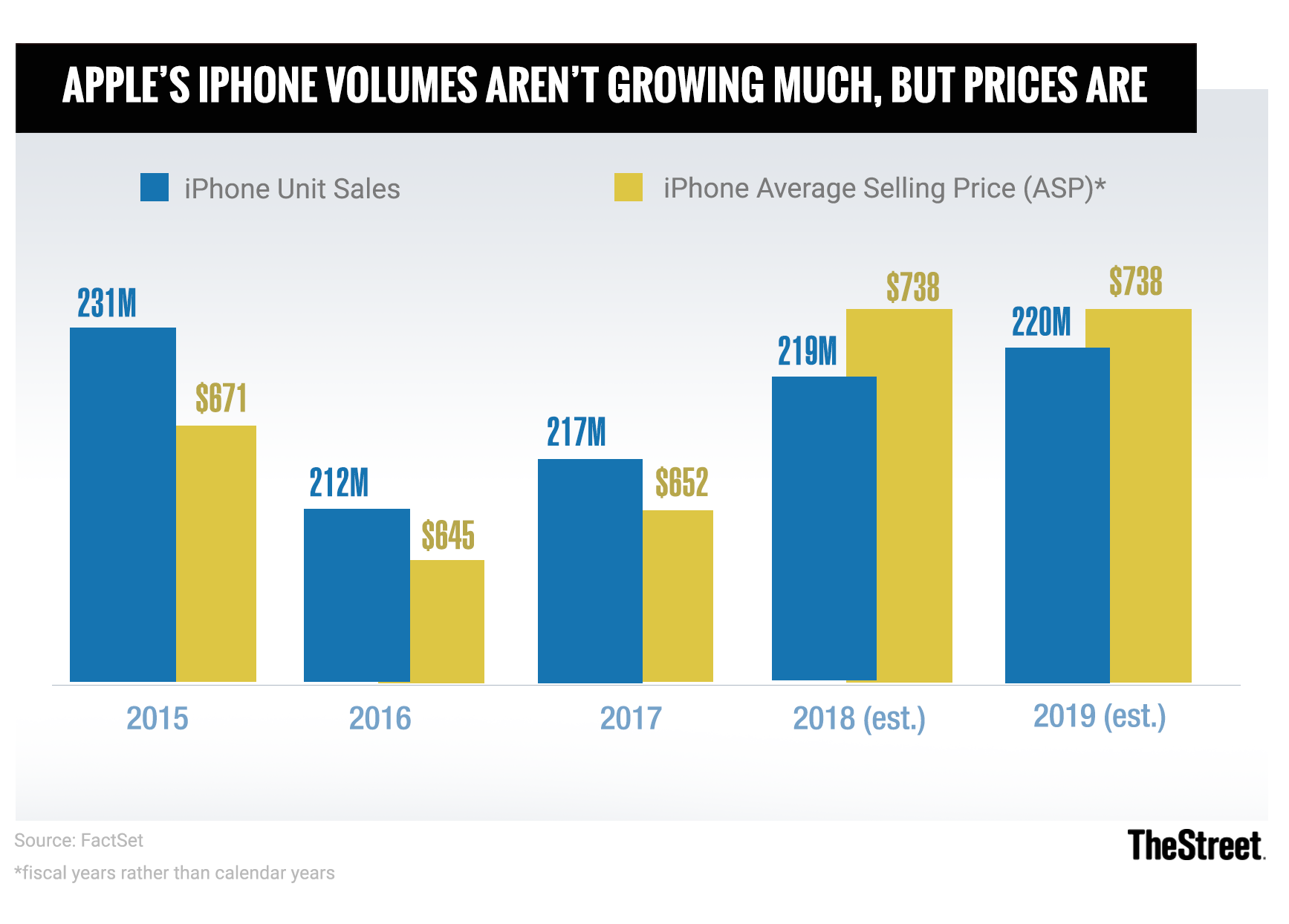 In addition, sales expectations for this year's iPhones appear to be subdued -- particularly for the iPhone X successors. Japan's Nikkei has reported that Apple has told suppliers it expects to order 80 million units of its three new iPhones, which is down from the 100 million iPhone 8, 8-Plus and X units it was forecasting a year earlier. And The Wall Street Journal has reported that Apple expects its new LCD iPhone to account for the majority of its new iPhone sales this fall.

All of that gives Apple an incentive to price a little more aggressively. Another incentive: Should more aggressive pricing help Apple take share, it would serve to further grow the company's iPhone installed base. And that would help the company grow its Services revenue base.

Apple is coming off a March quarter during which its Services revenue rose 31% annually to $9.2 billion. Strong App Store and Apple Music growth helped, as did large search ad revenue-sharing payments from Alphabet/Google (GOOGL) . And this growth, in turn, is partly due to the steady expansion of Apple's device installed base, which Tim Cook has indicated is still growing at a double-digit rate.

Likewise, growing the iPhone installed base serves grows the number of consumers that Apple can cross-sell the Apple Watch, AirPods, Apple TV set-tops, HomePods and other hardware that plays nice with iOS devices. Last quarter, Apple's Other Products reporting segment, which covers the aforementioned devices as well as iPods, Beats headphones and accessories, saw revenue rise 38% to $3.95 billion.

And while the Other Products segment's growth rate will likely slow in the coming quarters, it could very well remain at a double-digit clip for a while, given the momentum the Apple Watch and AirPods are currently seeing and the fact that Apple reportedly plans to launch new "studio-quality" headphones in 2019 and an AR/VR headset in 2020.

We might not know for sure whether Apple is overhauling its iPhone pricing strategy until this fall. However, for a company that's contending with a sluggish high-end smartphone market and has made a lot of headway in getting more revenue from its smartphone base via complementary hardware and value-added services, the argument for a revamp is pretty strong.

Get an email alert each time I write an article for Real Money. Click the "+Follow" next to my byline to this article.
TAGS: Investing | U.S. Equity | Consumer Discretionary | Telecom Services