The Sky Is Falling

Out come the pitchforks. Not the kind that I typically use in my technical analysis, either. Everywhere you look this morning. Different sites are running articles with scary headlines. The end of the bull's run. The beginning of a correction. Then there are a few salmon swimming the other way. This might even be the buy signal that we've been looking for, or is it? How do you know?

Well, kids, we really don't. For a couple of weeks now, the gist of the messages that I have been trying to get across was that the level of difficulty that traders will experience in traversing the marketplace had increased dramatically. I didn't lie to you, and I will not lie to you. I have known many bull market traders in my time. Many were superstars of the moment, of many moments. Funny thing is that I can still see some of their faces, but for the life of me, I cannot remember their names.

I have tried to pound a certain group of disciplines into group thought, as I know this saves folks from themselves. What now? What if you were hit in the teeth yesterday? I bet to some degree nearly all of you were. The vast majority of retail level trading accounts --  check that -- the vast majority of accounts in general, are net long. On top of that, the good people of Metropolis have learned through their own experience, and through habit, to be overweight the information technology sector. Disciplining oneself is the only way to reduce exposure in an orderly way. Now, you understand the value of diversity. Use a wall in whatever room, or office where you trade these markets. Take down the diplomas. Really... Who cares?

I cannot stress enough the importance of target prices and panic points. Still though, folks on social media seem nearly as surprised when I reduce on weakness as when I do on strength, though nearly 100% of the time, the reason is that one of those two price levels has been breached. In truth, panic points are anything but. They are merely levels where you have promised yourself on a less stressful day that you would take action. They are simply part of the road-map that makes surviving something that scares the snot out of normal people a possibility.

The Stick Was Out and About

Were you paid a visit by the Ugly Stick Yesterday? The truth is, the stick could be back today, or later this week. The usual uncertainties and order flows that force both month end and quarterly re-balances are still to play out by Friday. Until yesterday, many of the large investment banks were calling for the largest domestic equity outflows by Friday seen since 2016. There is no doubt in my military mind that some of that flow kicked in early when markets were trading at the Monday lows. Now that expected outflow, which was expected to be greater than $30 billion in dollar terms, becomes somewhat muddled. Just how much of that flow has already played out? Just how much is no longer necessary? Surely, this will also impact negatively expected inflows into the fixed income space.

The equity beat-down was thrown a life preserver from an unlikely source late in yesterday's trading session. It was none other than White House trade adviser Peter Navarro, an economist well known to prefer a more protectionist path on policy, who claimed in a televised interview that the U.S. has no immediate plans to impose restrictions on investment from China -- or anywhere else, for that matter. This came after Treasury Secretary Steven Mnuchin, who is thought to be more of a globalist on trade, tweeted that those kind of restrictions might just be more broadly based than previously thought.

Talk about confusing. Unless you understand what the president is doing. Obviously, the waters are being tested for market reaction, and having senior administration officials offer mixed messages that seemingly do not fit their personal profiles is likely part of game theory. Are we in a trade war? We are certainly in a trade dispute, with everyone. Cash should remain, in my opinion, at elevated levels. And speaking of levels, if you are in a name, know them.

Even at these reduced prices, for most net-long portfolios, shares in many positions are likely still trading well above net basis costs, especially if one raises revenue through the sale of put options in support of those longs. Just keep an eye on those strike prices, gang. If you have played it too close in order to squeeze out some more dough, you might have a self-inflicted would on your hands. Even with the best preparation, experienced traders do make mistakes. I am no different. I will, for the benefit of the reader, outline my most recent mistake, and how I am attempting to manage it. 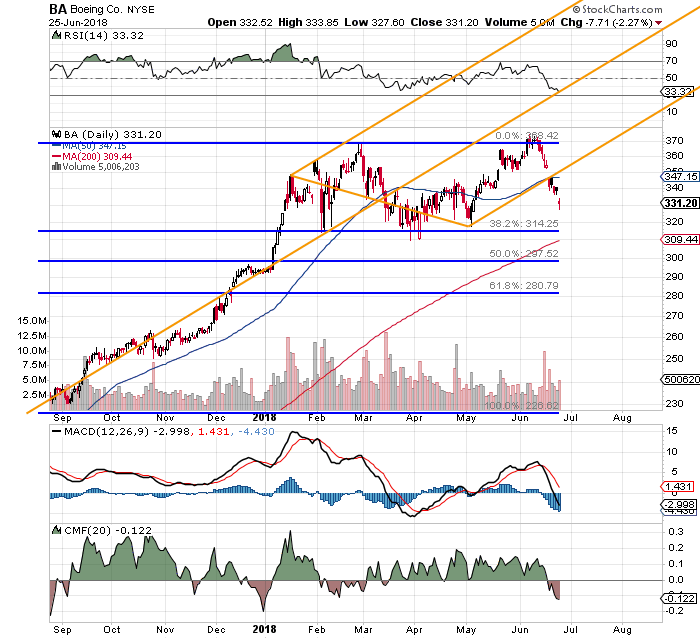 We all know this is a great firm. In fact, the firm released some positive news yesterday. Yes, China made it known that they would be getting cozy with Airbus in the near future. Bet you saw that. Did you happen to notice later on Monday when Boeing received orders worth $8.8 billion from India's Jet Airways, and also $5.6 billion from Vietnam's start-up Bamboo Airways? Yeah, these newsy tidbits flew under the radar.

Listen, I initiated Boeing (BA) at the point where the Pitchfork broke (346), thinking that I could expect to see support there. As per my own rules, I entered small, and am currently long only 10% of my intended position size. The position, as it is so small. is unhedged. Do I cut and run, gang? You know me better than that by now. This is what I am thinking. Remember, I don't tell folks what to do, I tell them what I am doing and what I am thinking. So much easier that way.

Now that the "fork" has broken, see that spot between the 200-day simple moving average (309), and a 38.2% retracement (314) of the August-through-June move? That, for me, would be a point of replenishment, where I likely bring my position up to 25% of my intended size. If I were long in size, this would change the nature of my thought, and that area would be a panic point that would force a partial sale, because I would be protecting something. If it doesn't get there, I sit on my hands. My intended investment would then morph into a trade.

Under normal circumstances, I would look to add a short position in a related put option series. However, given the uncertain path of forward-looking policy, I would be more comfortable simply writing a (covered) call against the position in order to lower basis. Last night you could still write a 350 July 20 call for $3.27. Not too shabby, in my opinion. If one is trying to play along, just be long at least 100 shares if you are going to go that route. Bear in mind that the firm reports on July 25.

Your pal was in transit yesterday. Otherwise, this would have already been done. If I can get prices close enough to where these names went out last night, I will add to JP Morgan (JPM) , Citigroup (C)  and Goldman Sachs (GS) this morning (all three names are holdings of Action Alerts Plus). I will also likely make corresponding sales where I see premiums for discounted puts -- at least for Citi and JPM. These additions are simply intended to take advantage of a positive, sentimental pop based on this Thursday's stress test capital allocation results. Hopefully this weakness is a gift, and I think the risk/reward ratio is in my favor here.

I expect to bring C and JPM back to their pre-June sizes in short order, and my long in GS was always intended to be short-term. This is simply a calculated play intended to take advantage of algorithmic overshoot in response to news.

Author's Note: Market Recon will not publish for the rest of the week. You can expect it to return in a week.

Get an email alert each time I write an article for Real Money. Click the "+Follow" next to my byline to this article.
TAGS: Investing | U.S. Equity | Financial Services | Technology | Economy | Newsletter | Politics