Something you probably know about me if you hang around long enough is that I am a baseball guy. I like the strategic, second-level thought required to play the game, or even just to follow along as a fan. Baseball was not my best sport as a young man. Far from it. I was better at games that required a certain level of physical aggression and subsequent reflexive response. That said, I have always been drawn to the life-size chess board, and the historical statistical comparisons, that only the game of baseball can provide.

As the son, and grandson of New York Giants fans, who adored the overt Irish-ness of the late John McGraw, I was doomed to a lifetime spent in support of my city's National League offering, leaving me some what defenseless as a fan. Defenselessness really is such an ugly condition. Something no person should ever experience, in real life. Something no investor should ever allow, which is why those of us who make a living in financial markets almost always have some set of rules that we live by.

The U.S. Treasury Department is preparing new rules that would be designed to prevent Chinese (25% plus) owned firms from purchases of U.S. (high end) technology type entities. According to the Wall Street Journal, the administration may, at the same time, block the export of high-end technology in any way to China -- a double whammy, so to speak. The administration may carry on with the use of a national security narrative as the reasoning for such moves, which would involve both the Commerce Department's cooperation with Treasury, as well as with the National Security Council.

You may recall the gasps and the surprised response from the peanut gallery earlier this spring when I revealed on the air at CNBC that I had gone to a 46% cash position. You may even recall that as far back as January, a week prior to the volatility meltdown, I had taken cash up to 30%. That was just my spidey-sense tingling. This is something more. Do not forget, Beijing has made their plans for global leadership plain in the areas of info-tech, aerospace, clean energy, and bio-tech.

Though I have put some dough back to work at various points between then and now, I have stayed above 30% cash unfailingly since that January revelation. By the way, a 20% cash allocation is extremely high for Wall Street, just for some perspective. It's not like I know something that everyone else does not. I have also, at times this year, often felt like I could be missing out on the next melt-up due to my large exposure to cash. Watch Jim Cramer on Friday night's Mad Money? Me too. Cramer's point was spot on. There will never be a better time for any U.S. administration to try to tackle the inequities built up in global trade conditions over several decades. In other words, while the nation currently finds itself in what has become a rare pocket of economic strength, the opportunity to positively impact long-term trade conditions must be tackled. The president likely feels this way. Yes, this most likely will leave a mark.

If you are a tech trader, as I often think of myself, the sector took it on the chin last week. I had ridden the semiconductor space to victory over and over again for a number of years. Now, for reasons really only related to trade, these firms become perhaps liabilities. I have long been a supporter of both Intel (INTC) and Nvidia (NVDA) . I liked both of the CEOs running these firms. Jensen Huang, the man who could seemingly do no wrong, and Brian Krzanich, the leader who would finally give Intel shareholders something beyond the dividend to cheer about.

Both of these Sarge faves have come under pressure in June, as has the larger group. Intel for reasons other than trade, that I think we can all agree might have left fans of the stock in some state of shock. I have successfully traded around NVDA's rises and falls (at least recently). As for INTC, I sort of got smacked in the teeth. Now, as many home-gamers, I imagine, are indeed involved in both of these names, we must figure out where to dig in, or if there is to be continued wreckage.

Unfortunately, both of these names are highly exposed on the revenue side to China. For Intel, Chinese exposure runs at nearly 23%. For Nvidia, that slice still comes to more than 18%. Now, as Intel leadership is likely to be distracted by the firm's search for a new top dog, is there a chance for rivals such as Advanced Micro Devices (AMD) , and Taiwan Semiconductor (TSM) to move in on what had previously been Intel's turf? In other words, if you are sitting on a large profit here -- or even if you are not -- is it time to cut and run? 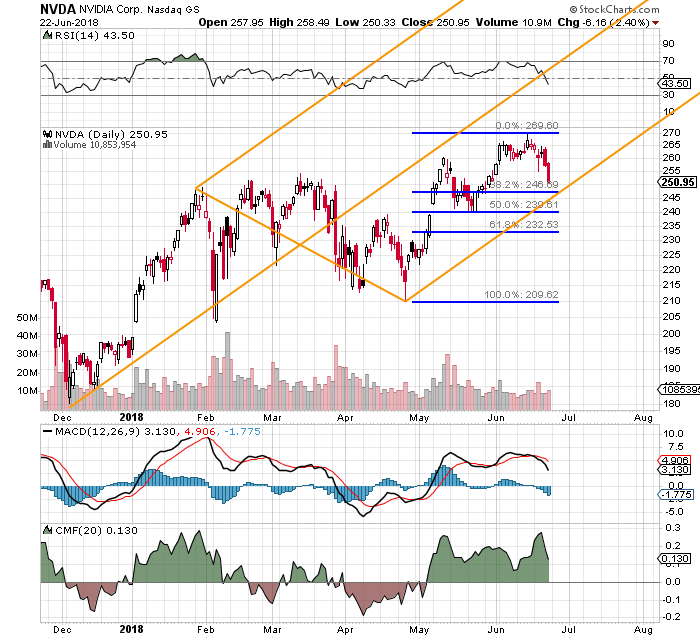 There are two spots on this chart that scream at me to pay attention. With this name, I am running skinnier than usual, having taken some profits at higher levels. Here I am more likely to add, than to cut and run, but the whole Chinese exposure thing really has me dragging my feet.

The $246 spot serves as a wake-up call. That is where a 38.2% retracement of this past Spring's entire move intersects with the lower trend line of a December-through-present Pitchfork, and it intersects right here in late June. That spot cracks, and we likely look at $239. That is precisely where the base for the June highs was built in mid-May when that spot held on multiple attempts. At $239 is the true panic point for a trader protecting a much lower basis, as that is where the potential for a "Holy Moley" moment exists.

I do not intend to add at this time to this Action Alerts Plus name. I need to see visible support at either one of these spots in order to even consider increasing. 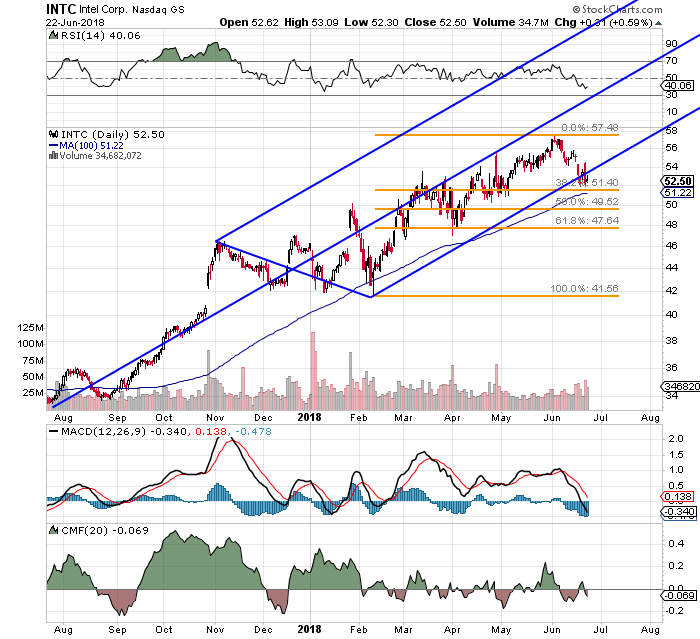 Here we have a more immediate problem, as we not only deal with negative publicity, but a high level of Chinese exposure. The first thing you'll see here is the failure of the Pitchfork model to hold last week. A negative looking MACD, Relative Strength indicator, and Chaikin Money Flow will also stare you in the face. This stock is trading in the overnight markets right now around that 50-day simple moving average ($51.22), which happens to be in the general vicinity of a 38.2% retracement of the 2018 range. A crack here this morning could really be more than a crack, especially if the firm is slow to define competent leadership.

Speaking of slow, I have been slow to react to the news flow around this stock, as it had been one of my top performers for a solid year. My bad. That also means that I have something to protect and will have to act should this level fail. I will likely sell 50% of my stake on any sign of resistance at that 50-day line. My intent would be to buy it back later -- but honestly, not until the firm gives me a fundamental, instead of a technical, reason.

Get an email alert each time I write an article for Real Money. Click the "+Follow" next to my byline to this article.
TAGS: Investing | U.S. Equity | Regulation | Markets | Technology | China | Economy | Newsletter | Politics | Risk Management | Stocks