American Airlines Group (AAL) has fallen to a new low for the move down today. Are the landing gear down? We looked at AAL in early January, noting that, "Right now it looks to me that the rally from mid-November is losing lift and that AAL could turn lower. A close above $55 would turn the daily chart bullish but right now I would worry more about the landing than the takeoff." AAL briefly rallied to $59 in January but it has since declined to $40 and is retesting the low of 2017. Let's see what the charts may suggest about the flight plan.

In this daily bar chart of AAL, below, we can see the decline from the January zenith. Prices are below the declining 50-day moving average line as well as the declining 200-day line. In early May we can see a bearish dead cross as the 50-day average line moved below the 200-day line. The On-Balance-Volume (OBV) line peaked in March and has worked lower telling us that sellers of AAL have been more aggressive for the past four months. In the lower panel is the 12-day momentum study which shows higher lows from February. This is a bullish divergence and tells us that the pace of the decline has slowed. Sometimes this bullish divergence can foreshadow a rally but it is not a good timing tool.

In this weekly bar chart of AAL, below, we can see that prices are below the declining 40-week moving average line. Prices are testing/breaking the early 2017 lows. Next potential support may be around $35. The weekly OBV line is pointed down and the weekly Moving Average Convergence Divergence (MACD) is negative.

In this Point and Figure chart, below, we can see the decline and a potential downside price target of $35.29. 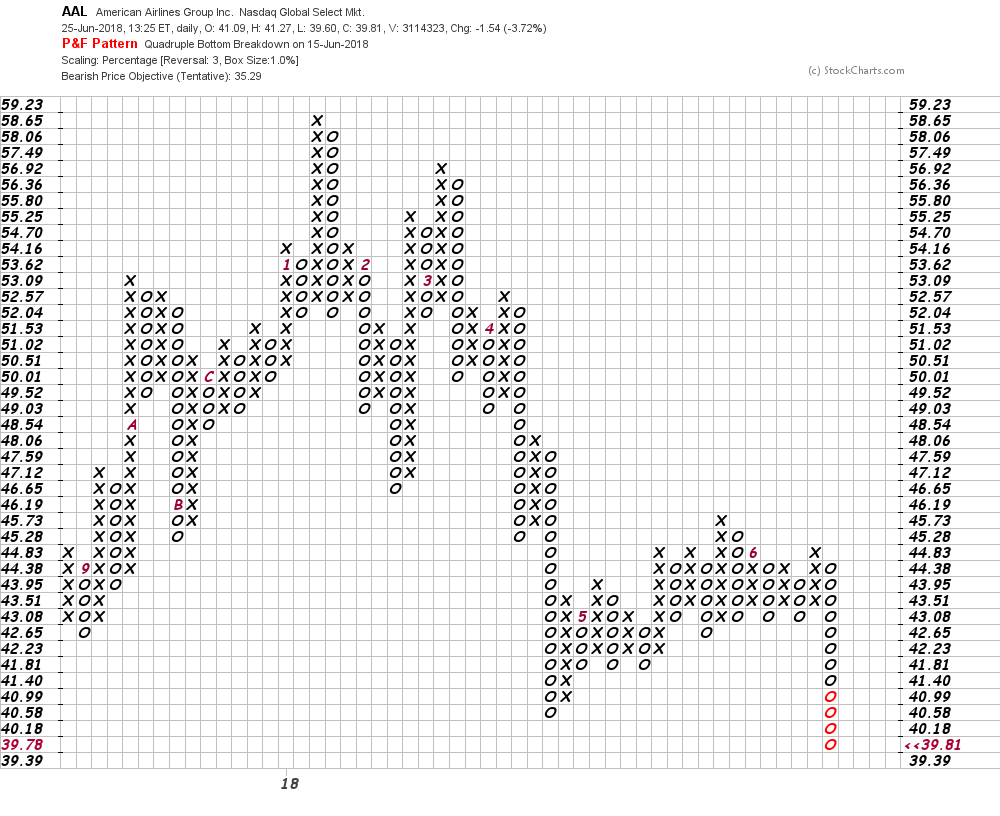 Bottom line: AAL could bounce in the short-run but the overall pattern is down and further declines to around $35 is the path of least resistance.

The president takes aim at 31 companies that the Defense Department says have ties to the Chinese military.