This commentary originally appeared on Real Money Pro on Jun 22. Click here to learn about this dynamic market information service for active traders.

Each of us has just a finite amount of money to invest. We want to own good values while cashing out of overpriced stocks while they're hot. Recognizing "which is which" is the key to getting great results rather than seeing our portfolios languish over time.

Both have shown decent growth over the past decade. Each company is expected to continue expanding at reasonable rates over the coming five years.

As of Wednesday morning MMM was priced at $213.90, about 23.9x this year's earnings per share estimate. That P/E multiple was the highest in more than 10-years. Meanwhile, TSCO was offered at $53.12, just 15.4x its 2017 EPS estimate. That was Tractor Supply's most reasonable valuation since the very start of 2011.

From those numbers, you might expect that 3M was the superior company. In fact, TSCO did much better than MMM looking backward. It's also projected to post superior growth across a wide cross-section of metrics out through 2022.

Why are investors paying up for MMM while shunning TSCO? I can't see any logic to support that view. 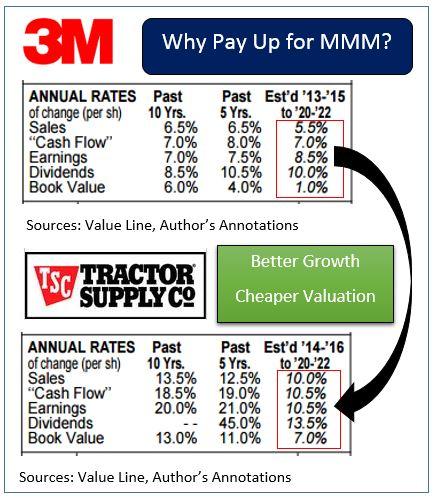 Fundamentals since 2007 clearly show MMM has never been pricier. Its P/E is much higher than its own historical average of 16.4x. In addition, MMM's 2.20% current dividend yield lags its 2.58% decade-long average.

A regression to a normalized multiple would only support a 12 to 18-month target of about $160. Assuming a greater-than-typical, 20x multiple, and 2018's estimate for EPS of $9.58 only suggests around $192 by the end of next year.

Barring some unexpected event, 3M appears quite overpriced and poised to retreat. 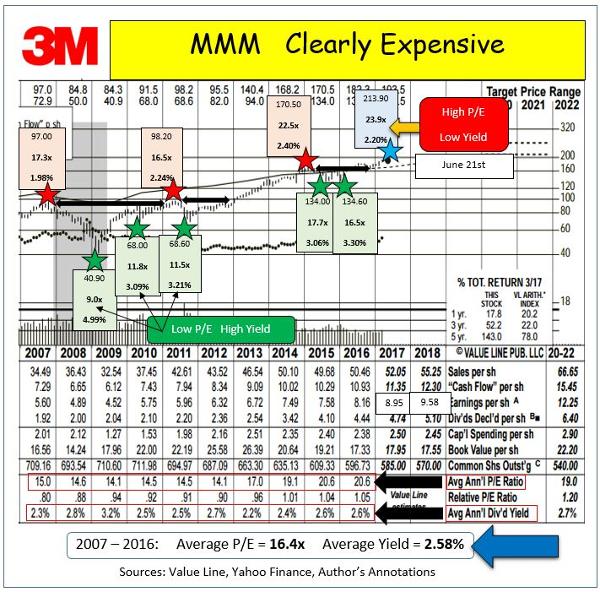 At its June 21, 2017, quote of $53.12, the shares fetched their cheapest P/E of the past six years. TSCO's well-covered current dividend yield of 2.03% is the best ever. It's twice the stock's historical average since cash payouts were initiated in 2010.

From the January 2011 launch pad, TSCO was about to more than quadruple by 2015. A simple return to TSCO's average P/E would support a 12 to 18-month goal of about $83. That level is not even a stretch. 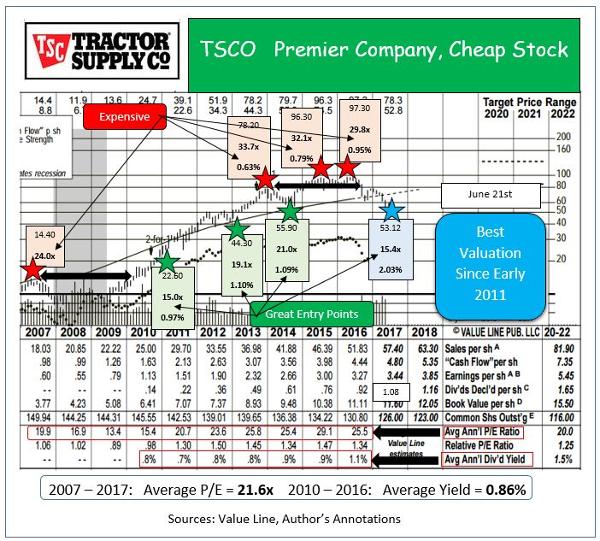 Mindless index investing has pushed many large-cap S&P 500 components to excessive valuations similar to MMM's. Money sent to S&P 500 index funds or ETFs automatically buys more of the largest-cap stocks regardless of their true worth.

Individuals can benefit by exercising some judgment.

Smart traders should be culling pricey, big-cap names while buying, or averaging down on issues that are irrationally cheap. TSCO remains one of my absolute best buys and largest personal holdings right now. I bought more on Wednesday.

Get an email alert each time I write an article for Real Money. Click the "+Follow" next to my byline to this article.
TAGS: Investing | U.S. Equity | Earnings | Stocks

CrowdStrike Reports Wednesday, and Here's Why I'm Not Married to the Stock

This may still be a trade and not an investment.