The year was 1990. The date? 22 June. The place was Berlin. Present at the ceremony were several allied military police officers as well as diplomats representing the United States, France, the United Kingdom, the Soviet Union and both East and West Germany. A French officer gave the command. "Please close the Checkpoint Charlie Control Point." Major General Francois Cann then ordered the military personnel to dismiss their detachments. That was all she wrote. After 29 years, the most famous crossing point in the Berlin Wall had closed. Away went the barbed wire, and down went the various national colors. Some of them forever.

Most of the major banks were expected to pass round one of the Fed's stress tests with flying colors. In all, the nation's larger banks did go 35 for 35 last night. These banks in aggregate hold a rough 80% of all assets held at all U.S. banks. In general, under a scenario that was more severe than what the Fed put the banks through last year, the U.S. central bank believes that these institutions are healthy enough to not only withstand a deep global recession, a 10% unemployment rate, and a sharply steepening yield curve, but that these banks would keep lending. Huzzah. No trouble at all, right?

Were you ever sure that you had aced an exam back in school, only to find out when you got your score that maybe you had been over-confident? Last night's "round one" results include something known as a "supplementary leverage ratio" -- among several other ratios designed to measure banking health and capabilities under duress. That particular ratio includes derivative exposure relative to capital levels. The Fed's minimum passing grade for this space is 3.0. Goldman Sachs, of all firms, squeezed by with a ratio of 3.1. It passed, but according to the Wall Street Journal, the firm, in statement released last night, announced that they were examining a divergence between the Fed's capital model and their own.

We will hear next Thursday, in "round two", which banks have actually passed or failed on their capital plans. That is when we will hear just how much capital that each bank will be permitted to return to shareholders. The Fed does historically slow down somebody somewhere when the second-round results are released. On the bright side, many analysts have been expecting this to be a banner year in terms of payouts versus profits. This is the very reason that I had increased my personal longs across core holdings of JP Morgan Chase (JPM) on recent weakness, and Citigroup (C) earlier this year. This, along with the volatility seen across financial markets this year is the reason that I even got myself involved in Goldman Sachs (GS) . I have enhanced these positions (at least what I call enhanced) through the finessed use of options -- in attempt to beef up proceeds at reduced risk. I'll let you know in a week how that went. The Goldman news did surprise me a little.

The U.S. Supreme Court ruled in favor of South Dakota in the South Dakota versus Wayfair (W) case. The vote was a surprisingly close 5-4. This now overturns a previous ruling dating back to 1967 that prevented states from collecting sales tax from retailers without a physical presence in that state. Obviously, that older ruling was made without the internet in mind, and was intended to govern transactions made by mail-order or through catalogs.

With un-taxed internet retailing now estimated to be costing the states an aggregate $33.9 billion per year, the evolution of the marketplace had obviously shifted. Brick and mortar had clearly, through both convenience and this "loophole," been disadvantaged. Some online retailers already collect tax on behalf of the states. Amazon (AMZN) , the nation's most famous of such businesses, is among those who do. That may be why Amazon was only down 1.1% on Thursday -- just barely under-performing the Nasdaq Composite (-0.9%). Wayfair, despite being named in the case, only saw shares decline by 1.6% on the day. The firm announced they it already collect tax on 80% of its U.S. transactions. Other "e-tailers" did not perform on Thursday nearly as well as did Amazon or Wayfair.

eBay (EBAY) suffered to the tune of -3.2% during yesterday's regular session, and if you own shares of Overstock (OSTK) , and you don't already know, maybe you just don't look at all. The name took a pasting on the day, amounting to a decline of 7.1%. I think eBay's statement made a particularly important point. According to Barron's, the firm said, "If state tax authorities attempt to subject remote small businesses to audits and lawsuits, there will be increased litigation across the country to protect small business from unfair burdens." That just about sets up the next paragraph.

Ever Heard of These Guys?

Talk about a timely public offering. The name is Avalara (AVLR) . The shares went public last Friday, and traded below $36 that day. Last night, this NYSE-listed name closed at $51.04, up more than 13% on the day. Just what does it do? AVLR is a cloud-based software name. Its game is the determination of tax-related obligations, and the navigation of associated regulation and compliance -- regtech. These shares traded as high as $59.40 yesterday, and were up 28% at that point.

Would I buy this stock? There is no doubt in my mind that demand for what they do will increase significantly. It is also nearly a sure-fire bet that competition will encroach upon the space in short order. Due to the short timeline available, and the instantly changing nature of the business, I don't think I could provide value through either fundamental, or technical analysis. This would be a spec buy.

There are not even options available to help one play the game at a reduced level of exposure. For now, you're on your own here. 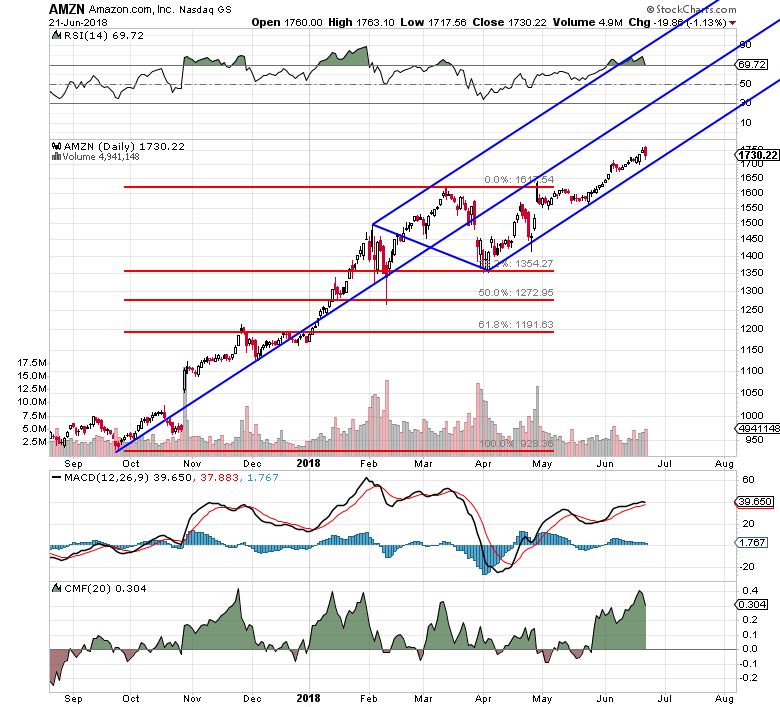 Get an email alert each time I write an article for Real Money. Click the "+Follow" next to my byline to this article.
TAGS: Investing | U.S. Equity | Financial Services | Technology | Markets | Newsletter | Options