Oracle Corp. (ORCL) has made an impressive rally in recent years from its 2009 nadir. Depending on the chart you look at, Oracle has either broken out on the upside or is poised to break out over its March high and the late 2014 highs.

Price is a more important indicator to me than volume, but volume offers market watchers, myself included, lots of information about the power or force behind a move. Let's take some time to look at our various charts and indicators to see if this rally is the start of a fresh leg higher.

In this daily bar chart of ORCL, above, we can see that prices gaped higher on sharp volume in mid-March. After a quick spike to a new high, prices settled down into a sideways trading range or consolidation. The rising 50-day moving average line caught up with the price action, and prices have traded below this line in May and June.

What is interesting or problematic is that volume returned to its same neutral pattern after the volume spike in March. The daily On-Balance-Volume (OBV) line failed to pick up on any aggressive buying and has moved sideways the past four months. This is not to say that there hasn't been buying and accumulation of ORCL; it just says that buyers have not been visibly aggressive, with heavier volume being traded on days when ORCL has closed higher.

In the lower panel of this daily chart is the 12-day momentum study, which shows that momentum has weakened since February. A slowing momentum picture can be a sign of a weaker prices, but it is also typical of consolidation patterns -- not conclusive.

In this weekly bar chart of ORCL going back five years, above, we can see that prices are above the rising 40-week moving average line. The weekly OBV line has been in a downward slope since mid-2014 and it has a slight upward slope the past year.

The Moving Average Convergence Divergence (MACD) oscillator is above the zero line (bullish) but the two moving averages of the indicator are crossing to a take profits sell signal. 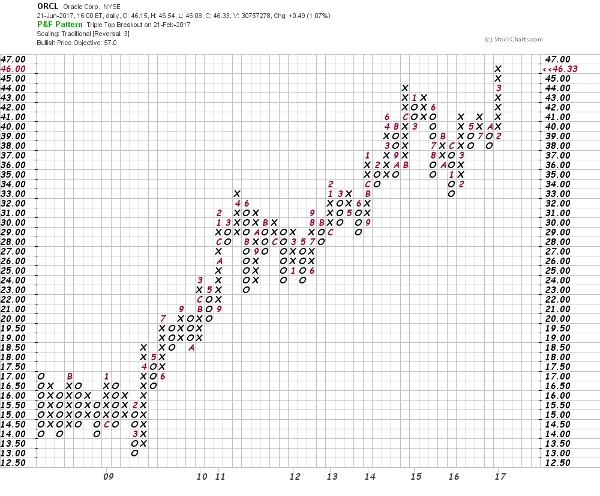 Bottom line: The price action suggests that ORCL is heading higher. The lack of confirming volume makes me cautious, however. Aggressive traders could go long ORCL on a close above $47 and risk a close below $44.25 looking for gains to around $57.