Most people wonder... what if? What if I had made choice A instead of choice B. Where would I be now? What about choices that I made for my children? How have I impacted their long-term futures? Have I done the right things? Have I acted as a moral and ethical example? For most us, these questions arise from time to time. With leadership comes great responsibility. I wonder what Fed Chair Jerome Powell thinks about when the lights go out.

Unemployment now stands at merely 3.8%. This is the lowest percentage of labor market participants not actually finding something in over 18 years.The FOMC's official policy statement last week upgraded their description of domestic economic growth from "moderate" to "solid". The Atlanta Fed's GDPNow model for Q2 2018 is cooking at an annualized 4.7%. Keep in mind, Atlanta is merely a snapshot of current conditions, not a prediction. Earnings for the second quarter are expected to be excellent, yet again. In fact, according to FactSet, that growth, at least for the S&P 500 is now looking to print in the 19% range. What does the FOMC do going forward? How does the Fed Chair lead? Jay Powell is in a tough spot. His problems are very different from anything his predecessors faced.

What comes of this week's OPEC meetings with non-OPEC producers? How will crude prices react to a deal allowing for increased output? The FOMC signaled two more increases for the Fed Funds rate last week. What if economic growth supports that process, but both the lack of overt consumer level inflation and investor fears of an all-out trade war put a cap on the long end of the yield curve? That could force an earlier than natural inversion. I have learned over the years that anything is possible, and everything is temporary.

Powell sounded somewhat hawkish yesterday in Portugal. He has to prep the markets in that way, as it is far easier for a central banker to walk back from a hawkish position than it would be from a dovish one. I thought it quite astute of the Fed Chair that he understands that the changes made over the past few decades in the structures of both the US economy, as well as in monetary conditions, seem to at least to some degree discount the value of historical perspective. This kind of keen observation is a value added that both of Powell's immediate predecessors as academic economists, seemed unable to grasp.

I preach a lot on adapting, on staying disciplined. Perhaps this is because I have learned how to survive tough markets over the years despite the fact that everybody here is pretty darned smart, and that I am not special. While the ability to transform into whatever is needed whenever it is needed is invaluable, traders must at this time watch exposure to international trade, as well as a flattening yield curve. All while playing up domestic growth. Tightrope.

The spread between the US 2yr and 10 yr notes has flattened to less than 37 basis points. That's awful if you're a banker. Rising rates should help, you would think, but only if there is a positive resolution to these trade skirmishes removing the impact of safe haven buying, and only if the Treasury Department is smart enough to focus issuance on the long end. I am long some banks. I am short some put options across the space. I have added to equity stakes in both Goldman Sachs (GS) , and JP Morgan (JPM) on recent weakness ahead of expected CCAR results. Under current conditions, I should be hip deep in the financials, but I am only comfortable in ankle deep water right now. I take my own cautiousness as telling, as in the past, the banks had been where I buttered my bread.

Dancing In The Rain

How does one dance in the rain without getting wet? How does one avoid getting smacked around by rising dollar valuations, a collapsing yield curve, cross-border trade tensions, all while still capitalizing on an economy that seems to be fit as a fiddle? You could just buy a Russell 2000 ETF. You could, and it might make sense to include such product in your portfolio, but individually, how about staying long the cloud?

The Nasdaq Composite seems relentless. That index closed at another fresh record yesterday, despite the negative pall that has been hung on the Dow Jones Industrials. The strength of the Nasdaq is tech, and the strength in tech has been "Internet Software and Services"... aka ... "The Cloud". I profiled several of these names on Tuesday. I remain long Adobe (ADBE) , Salesforce (CRM) , Splunk (SPLK) , Amazon (AMZN) , and Microsoft (MSFT) . Why wouldn't I? To me, those able to capitalize from the growth of the cloud seem to be moving past traffic slowed down by factors impeding other business lines. I am long another name. A very exciting name, I think, that should not suffer all that much from policy changes. They just might need to show a profit at some point. Spotify (SPOT) .

There are not a lot of traditional fundamental reasons to get long this thing. High debt levels. No dividend. Negative Profit Margins. This is a speculative play for sure. There are some things that I like. Really, really like. Growth. Expected 2018 revenues of $5.2B are expected to turn into 2019 revenue of more than $6.6B. Expected 2018 EPS of $-2.21 is expected to turn into 2019 EPS of $-0.08. Oh, and did I mention that Management still owns 46% of the firm. Skin in the game. I love that. Don't bet the farm, gang. It's just a place to go. The broader cloud? That might be a farm-sized bet. 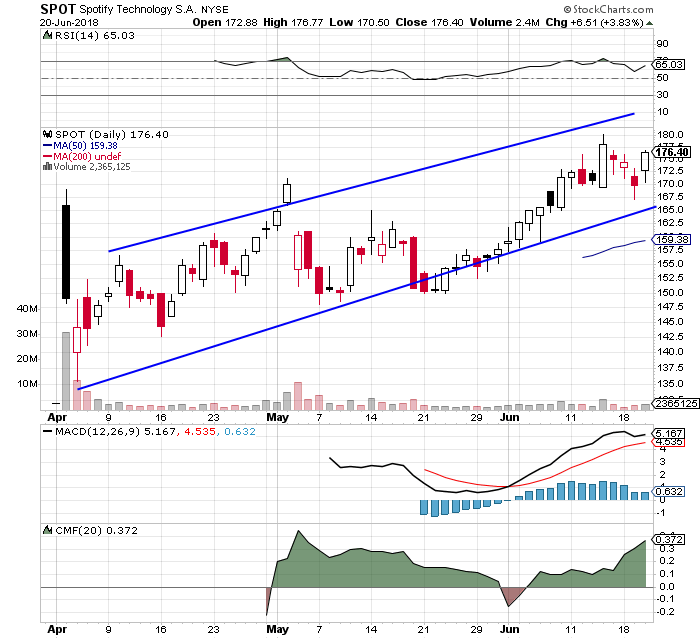 Honestly, there is not enough data here to get extremely fired up just yet, but it's plain to see that a trend is developing. Still shy about shelling out 176 clams for a money losing operation? Earnings are next due for this one on July 28th. You know I always look to sell puts in names I like. August 160 monthlies went out last night with a last sale of $5.10.

Would you risk having to pay a net 155 in less than two months for stock trading at 176 and change that seems to have some nice momentum in order to raise 500 bucks today? I might. Then again, I'm already long these shares.

Get an email alert each time I write an article for Real Money. Click the "+Follow" next to my byline to this article.
TAGS: Investing | U.S. Equity | Financial Services | Economic Data | Earnings | Economy | Entertainment | Markets | Stocks