Tesla (TSLA) has rallied sharply so far this month. Has this rally done enough to charge up the longer-term charts or are we just spinning our wheels? Let's check out the charts and indicators and even look under the hood to see if this is the "real deal" or just another short-covering rally.

In this daily bar chart of TSLA, below, we can point out a number of key chart signals over the past three months that indicate a strong turnaround. At the end of March and early April prices plunged and trading volume soared. Prices made a "V-like" reversal suggesting that the decline was overdone. The heavy volume suggests that some weak hands may have dumped shares of TSLA as it broke under $300 and that others with perhaps deeper pockets or a different time horizon were buyers of that weakness. No moving averages were broken in April but the On-Balance-Volume (OBV) line turned upwards and the Moving Average Convergence Divergence (MACD) oscillator crossed to the upside for a cover shorts buy signal. Another rally got underway in late May. The slope of the 50-day average line turned positive and earlier this month TSLA crossed above the flat 200-day line. June also saw the OBV line soar to a new high and the Moving Average Convergence Divergence (MACD) oscillator cross the zero line for an outright go long signal.

In this weekly bar chart of TSLA, below, we can see some recent strength. Prices have rallied above the 40-week moving average line and its slope is flattening. The weekly OBV line turned up at the end of March and has moved up to a new high. The weekly MACD oscillator crossed to the upside for a cover shorts buy signal and is close to crossing the zero line for an outright go long message.

In this Point and Figure chart of TSLA, below, we can see a breakout trade at $364 and a tentative Point and Figure price target of $507. A decline back down to $336 would probably weaken this chart. 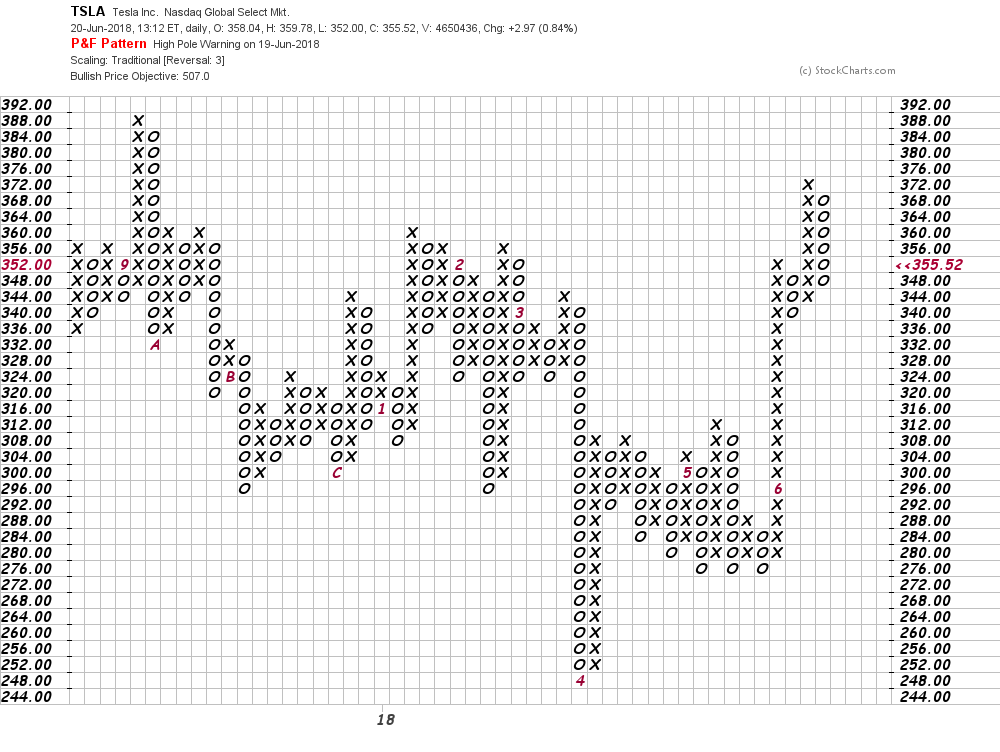 Bottom line: TSLA has rallied $120 the past three months and looks extended. Near-term a period of sideways price action is anticipated before TSLA tries to break above $390 -- the highs of 2017.

Get an email alert each time I write an article for Real Money. Click the "+Follow" next to my byline to this article.
TAGS: Investing | U.S. Equity | Mad Money | Stocks