A noise from a radiator pipe. A drip from another room. Gusts of wind heard, but not seen. All parents at some point have to reassure their children that there are just no such things as ghosts. Why? So that these adorable little offspring might drift into a state of slumber. Then everyone in the household can follow suit. However ... no parent truly knows about ghosts, now do they?

The Chicago Gas Company gave up the firm's independence in 1897. The American Tobacco Company broke up in 1911. The US Leather Company? A real stalwart. They hung on until 1952. These three firms were all part of the original line-up of twelve industrial firms that made up the Dow Jones Industrial Average on May 26, 1896. All now simply ghosts. There was another that you may have heard of. They call that one "General Electric" (GE) .

GE was an original member of this club, and a continuous one since 1907. By the way, the cities of New York and Brooklyn were not unified until the next year -- 1898. Orville and Wilbur Wright would not make their famous first flight until December of 1903. Just adding a little perspective.

Last night, David Blitzer, chairman of the index committee at S&P Dow Jones Indices, said "Today's change to the DJIA will make the index a better measure of the economy, and the stock market." What Blitzer was referring to was the two "boots". One was the boot that General Electric was getting, right out of the Dow Jones Industrial Average after 111 continuous years of membership. And the second was the addition of Walgreens Boots Alliance (WBA) to that index. The swap is expected to take place next Tuesday.

Overnight, shares of General Electric fell from the stock's closing price of $12.95 (-55% over twelve months) to $12.54 (-2.2%). WBA went the other way, seeing a 3.4% increase overnight. Now, to be fair here, gang, the material impact should not be all that significant. We are not talking about the S&P 500 here. Less than $30 billion worth of mutual funds and ETFs even bother to track the Dow Industrials. The index is not the bell-weather that it is made out to be. The S&P 500, in comparison, is tracked by something close to $10 trillion in assets, a much bigger deal -- especially in the era of passive investment.

So, you ask yourself, "Self, is it almost time to buy GE?" The firm is still trying to intelligently sell many of its parts. As an observer, I do believe that CEO John Flannery is an earnest leader making an honest effort. Gone is the railroad business. Hopefully soon gone will be lighting. Both of those business lines were pretty much as old as the firm.

For the firm, aviation and healthcare have been sources of strength. Power remains a problem child -- and it needs to be a source of strength for this firm to ever thrive once again. Just my opinion. At least the dividend survived for now, without another reduction. This came after significant doubts were raised regarding that payout within the analyst community. For GE, there will be a bottom at some point. That is a promise.

Bottom fishers like flounder. They enjoy the mild taste of halibut. Those same folks might also, by now be looking at Bitcoin. The crypto-currency seems to be trading in a tighter range these days, usually with the first digit being a six. More bad news struck overnight, as yet another South Korean crypto-exchange saw significant assets stolen by hackers. This time, it was Bithumb. Assets stolen came to a rough $30 million. Last week, it was Coinrail. The belief is that assets stolen in that breach could come to more than $40 million worth.

There is no doubt that many folks believe in the evolution of blockchain technology, though opinions do sometimes seem split on even that. We all noticed earlier this month when the government got involved and demanded that several exchanges where Bitcoin trades hand over their trading data in order to assist a probe into whether or not (futures) pricing was being distorted through some kind of manipulation. What has happened recently in South Korea is not the only time hackers have affected the space, either.

I think it was Voltaire that said paper money will eventually return to an intrinsic value of zero. My thought on that is simply that fiat will retain some store of value as long as someone still trusts their government. When it comes to crypto, just who do you trust? How do you know?

At some point, the treasury departments and central bankers of the planet will take control of the crypto world if they need to. At that point, taxation will be automatic. Personal freedom will be lost, but not power. Anyone who thinks global leaders will permit their power over wealth control to simply melt away is crazy. Our pal, Doug Kass has often stated his target price of $2,000 for Bitcoin. I like Doug. I do not always agree with him on everything, but on this, I am pretty sure I do. In fact, I think Doug might just be a little too generous on this one.

You have probably already figured out that I think GE is closer to a bottom than is Bitcoin. If I am wrong, I don't really give a rat's tail. If I owned Bitcoin, it would keep me up at night. Peace of mind is a worthy reason to avoid investing in anything. Let's take a technical look at General Electric. 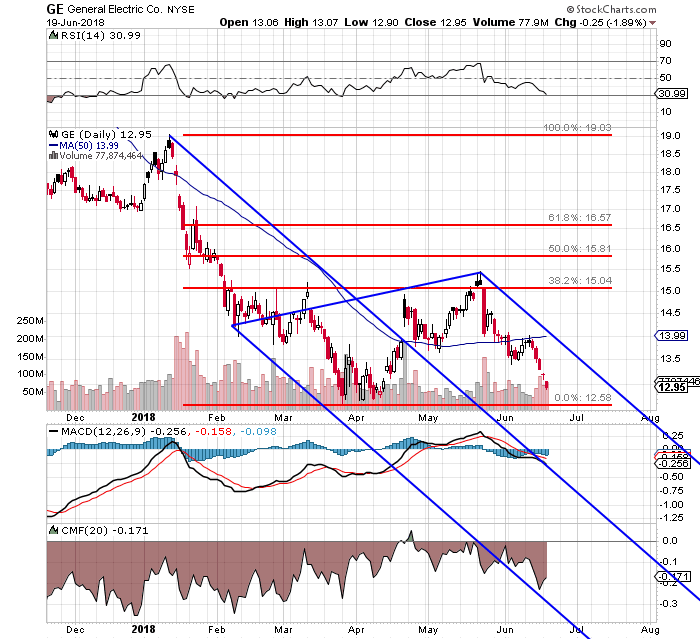 Gross. You may recall that I did get myself out of this name at $14.85 -- after earnings -- with a profit thinner than cray paper (and not worth the year and a half of hard work just to manage the position). So, why would I even consider climbing back aboard? I have already told you. I like John Flannery. Don't know the man, but I think I know a mentally tough guy when I see one, at least I hope I do.

The shares will open at something close to a 100% retracement of the April-through-late May-move today. Money Flow is awful. The shares will likely open in an oversold condition today, as well. Today's weakness will be sentimental. There will be more of that next week. The Pitchfork model, drawn in blue, does allow for pricing close to $11. Do I leg in now?

I might be crazy enough to purchase an equity stake ahead of next week. I am not crazy enough to travel that road without doing a little tinkering in the options space. Earnings are due prior to the open on Friday July 20. The shares are likely to be a little volatile coming in. For new traders, this idea is known as a protective collar.

The covered call raises revenue, while the purchased put protects the equity stake. These premiums (note, they will be different when they open. You will either have to adjust for that, or change strikes) add up to a credit of $0.10, while limiting both your upside, and your downside. The chart indicates (to me) the potential for prices ranging from $11 to $15 by earnings. This is a way to enter with reduced risk. The protection afforded by the collar will outlast the market response to whatever the numbers reveal, and whatever the conference call implies.

Get an email alert each time I write an article for Real Money. Click the "+Follow" next to my byline to this article.
TAGS: Investing | U.S. Equity | Consumer Discretionary | Consumer Staples | Industrials | Newsletter