CVS Health (CVS) has been stuck in a seven-month consolidation pattern bounded by around $84 on the topside and the $74 area on the bottom end. My favorite group of daily and weekly indicators are pointing to a decline back to the 2016 low.

Let's see how the prices and indicators are lining up for a potential downside breakout. As is our "custom" let's start with a daily bar chart, below.

In this daily bar chart looking back 12 months we can see a big decline from August to November followed by the sideways consolidation we mentioned above. CVS has traded above and below the 50-day average line for seven months while the 200-day moving average line has been pointed down the entire time. Rallies in April, May and June have stopped short of the declining 200-day line.

The daily On-Balance-Volume has been mostly declining the past year, telling us that sellers of CVS have been more aggressive than buyers for much of the time. Heavier trading volume on down days is a sign that longs want out. In the lower panel is the trend-following Moving Average Convergence Divergence (MACD) oscillator which has crisscrossed the zero line like prices have crossed the 50-day average.

In this weekly bar chart of CVS, below, we can see that prices have been declining for two years. CVS is below the declining 40-week moving average line. The weekly OBV line has been in a downward glide since April 2016. The weekly MACD oscillator has been below the zero line the past 12 months telling us the trend is bearish.

In this Point and Figure chart of CVS, below, we can see several rally failures since January (the number 1 on the chart). There is a little chart support in the $75-$74 area but this chart projects a decline to $69. 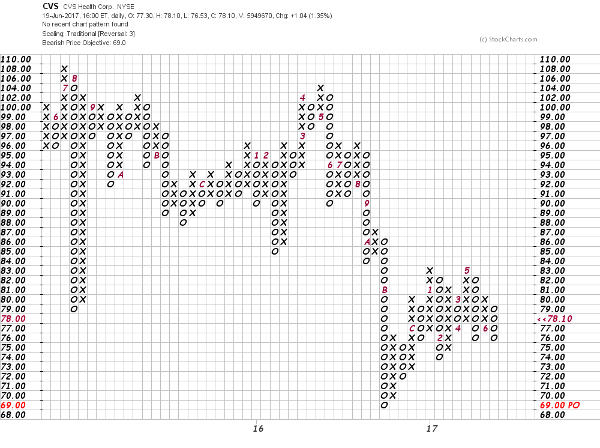 Bottom line: Unless CVS rallies above $83-$84 I would anticipate further price weakness with the potential to reach or retest the $70-$69 area in the weeks ahead.

Get an email alert each time I write an article for Real Money. Click the "+Follow" next to my byline to this article.
TAGS: Investing | U.S. Equity | Healthcare | Consumer Discretionary