Caterpillar Inc. (CAT) was the first stock Jim Cramer mentioned last night on Mad Money in a hypothetical "Gloom Index" ETF to focus on how gloomy and depressed investors have become. This part of technical analysis is typically called sentiment.

Sentiment can mean different things to different analysts. Some analysts look at the action of investors and traders to judge how bullish or bearish they have become. The thinking is that when too many investors have become bullish by going long on margin, buying out-of-money calls, extending duration and so forth the market is due for a correction to the downside. The opposite can happen when investors are in cash, buying puts and have shortened maturities. In other words too bearish.

Other analysts can focus on what investors are saying in surveys or in the media. This can include following the surveys of the AAII or Market Vane. Still other analysts find it interesting to watch things such as the covers of popular magazines like Time to get a sense of extremes.

In the updated daily bar chart of CAT, below, we can see that prices gapped below the flat to declining 50-day moving average line. The rising 200-day moving average line was tested in early May and is likely to be tested today or at least this week. The volume of trading was neutral for much of May and early June but has increased on the recent decline, telling us that investors are voting with their feet. Indeed, the daily On-Balance-Volume (OBV) line was flat from May into June but has recently turned lower signaling that sellers are being more aggressive. The Moving Average Convergence Divergence (MACD) oscillator (lower panel of the chart) turned down for a take profits sell signal in late May and is very close to crossing below the zero line for an outright sell signal.

In this weekly bar chart of CAT, below, we can see a largely bearish setup. Prices are right on the rising 40-week moving average line and we could see a close below the line soon. A close below the 40-week line has not happened since 2015. The weekly OBV line has been rolling over to the downside the past month and the weekly MACD has been correcting since early 2018.

In this Point and Figure chart of CAT, below, we can see a potentially very bearish distribution pattern. There is a $137 downside price target indicated; however, a trade at $137 or $136 is likely to break key chart support and open the way to further declines, in my opinion. 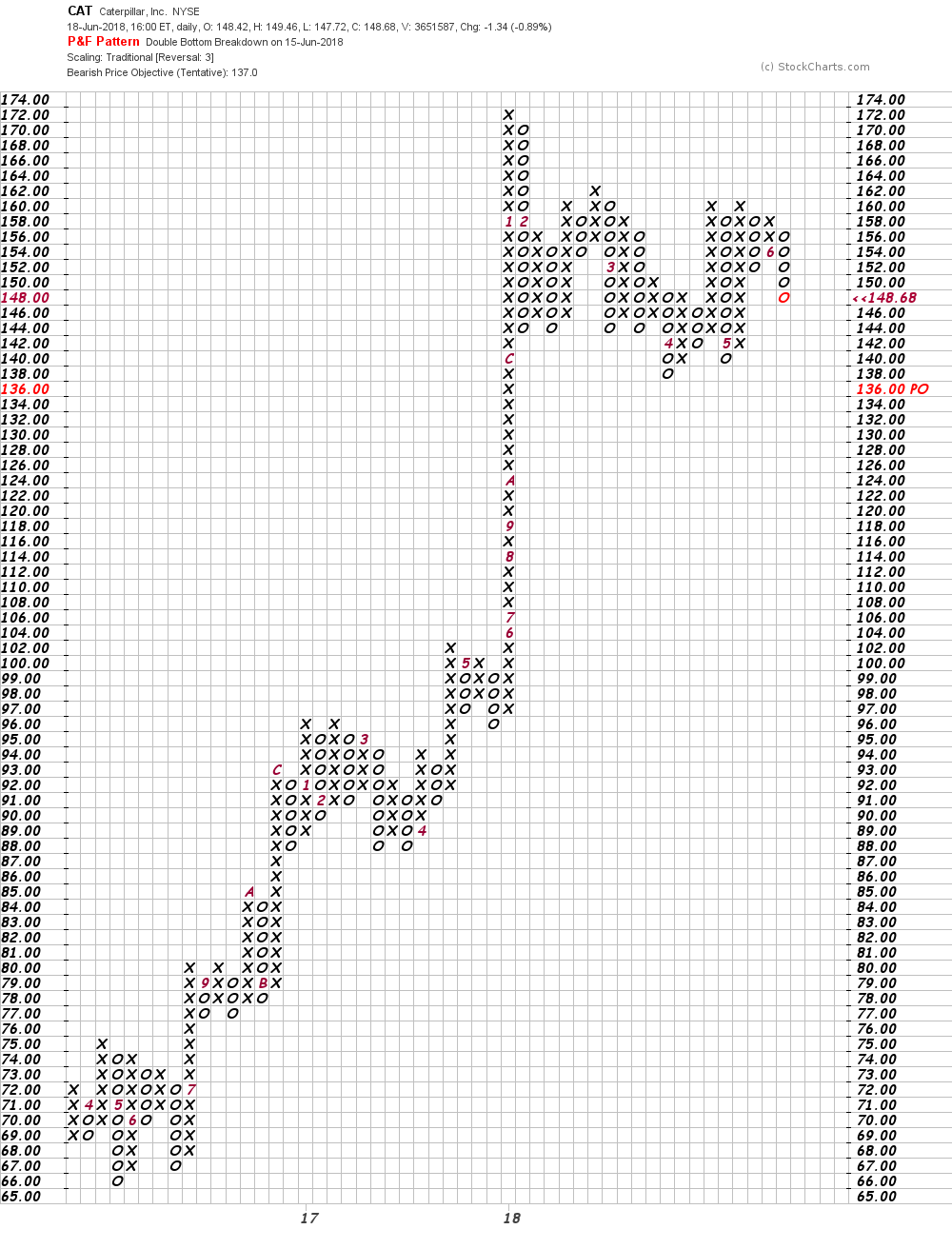 Bottom line: Here is one of the differences between fundamental analysis and technical analysis. CAT can be a great well-run company with the ability to grow earnings but right now the charts of CAT look weak and vulnerable to declines. Investors in CAT need to aware of two key chart points -- the intersection of the 200-day moving average line near $145 and the April-May lows around $138. Closes below these chart points can mean further declines in the weeks ahead.

Get an email alert each time I write an article for Real Money. Click the "+Follow" next to my byline to this article.
TAGS: Investing | U.S. Equity | Industrials | Mad Money