This is not the first time in my long career where my energy thesis and energy positions have run against the countervailing trend and the mass of opinion on where prices are set to go. It will also not be the last, but the mark of a career trader is in how you manage those positions and the strategy you take going forward -- and that's a critical item I want to talk about here.

We've seen the overwhelming majority of oil analysts move into a bearish stance on oil -- Goldman Sachs and Morgan Stanley have lowered their price guidelines going into 2018. Indeed, despite the mostly bullish opinion of hedge funds for most of this year, we've recently seen those hedge funds turn against oil and reduce their long positions to the lowest they've been so far in 2017.

Looking at charts, the reaction of oil -- and oil stocks -- couldn't be starker. Despite oil's reticence to move much below $45, oil stocks have shown no such relative strength -- they've been in a relative freefall for much of the year, despite the general stock market indexes reaching all-time highs. 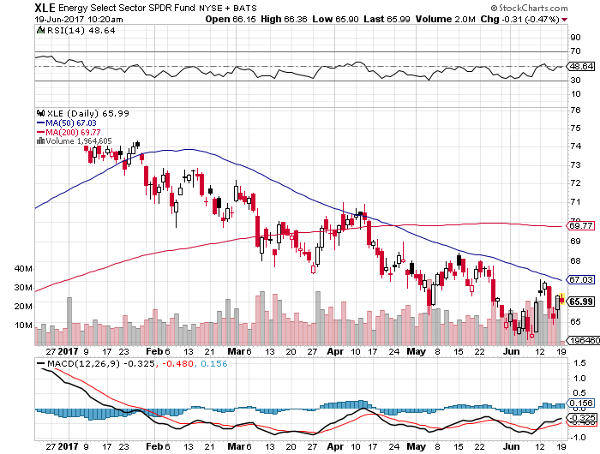 That is an indication of part of what has made me so bullish. It is clear by the action of oil stocks that oil companies are negative cash flow disasters with crude hovering under $50. I have continued to say oil companies cannot survive forever at $40 crude or even $50 or $60 crude -- and that these companies would either bend to the low price and reduce their production or totally go out of business.

Neither of these has happened, making the midterm prospects for oil stocks this year continue to act bleakly.

Yet my long-term thesis remains intact -- ultimately fundamentals win out and oil must either reach a consistently profitable price for production, or there will be greater shortfalls to demand ahead, delivering the same ultimate result.

For now, however, it stinks.

In this moment, my experience says the second option is the best choice, even though I believe the negativity is way overdone and there is great value here for the long-term investor.

But trend fighting is a difficult chore -- requiring self-discipline and patience -- and watching market positions slowly get worse while waiting for them to get better is a draining experience, as this year has already proven to be.

Still, and despite energy stocks drifting lower, our core portfolio, if you have been following me, is full of ultimate survivor stocks -- not the speculative type that will require a fast turnaround in oil prices to fully recover.

Cimarex (XEC) at $93 is too cheap to sell, as is EOG Resources (EOG) at $88 and Apache (APA) at $49. I would advise a small addition in exposure in these areas if the consensus wasn't so completely negative. (Cimarex and Apache are part of TheStreet's Action Alerts PLUS portfolio.)

There are fundamentals of overhang of production to work through here that will make this turnaround come more slowly than we had hoped. But positive signs still outweigh the negatives. Global production is rebalancing. Oil production in the U.S. is increasing, but will never reach the expectations of either the producers or the Energy Information Agency, should prices remain under $60, which they seem capable of doing through the rest of this year. Production efficiencies are rolling over -- even in the super-hot Permian.

There is a time to be aggressive and a time to sit back and patiently wait. Now is the time to opt for the latter.