A Peace You Can't Count On

It happens to every experienced outdoors type. You get out there, way out there. You're comfortable with your sense of direction. You have at least a map of some kind. Lensatic compass on your suspenders. One could rely upon GPS in order to determine precise location, but personal pride disallows. The weather is beautiful. You've seen signs of game, but not the animals themselves. You enjoy yourself, but wonder. There must be a reason that the animals are not around.

Then you see the tracks. Must be a dog. Right? You look once. Kind of can't tell. You find another, and then another. No kidding yourself now. No visible claws. No trace-able "X". This is no canine. You are tracking a feline, and now it clicks in your head. Those tracks seem fresh. The small game took off before you got there. Maybe this cat is not the one being tracked. You get real low. You look for a good defensive position just in case. Even if you never run into this cat (and sometimes you do), the peace has been broken. Hair on end, you are now simply trying to avoid a confrontation with a predator.

Almost every year, markets seem to take a break over the summer months. A break, at least from volume. Every once in a while, such as in 2015, markets move significantly during these months. In the past, brokers, traders -- some of the economy's biggest hitters -- would take vacations throughout the season. Their underlings would be less bold, and in many cases, would just try to prevent the ship from sinking while their bosses were out of touch. This would slow financial markets down.

This whole "dog days of summer" theme is no longer valid. For one, anybody employed in any line of work can attest that nobody is truly ever out of touch any more. In any line of work, even if on vacation, just try letting an e-mail or business call go unanswered for half an hour. Good luck. The same is true in finance.

On top of this, the vast majority of execution is now controlled electronically. Algorithms do not take vacations. They do not commute. They do not sleep. They do not eat, nor do they use the rest rooms. They simply act in whatever way they have been written to perform, whenever certain conditions are met. Algos do not care that this is summer, and are more than happy to take your job away from you if you can't keep up.

Keeping Your Helmet On

1) Monetary Policy. The Federal Reserve is swimming one way. Global central banks, such as the European Central Bank and Bank of Japan, seem to be trying to give the appearance of moving in the same direction while actually stalling in place. The hawkish Fed's co-existence with the dovishness of these other central banks is placing upward pressure on U.S. dollar valuations. This hurts the Dow Industrials a lot more than it does the Russell 2000. Let's not forget that the ECB has pledged to further taper it's asset purchasing program by September. What exactly does that mean for Europe's weaklings?

2) International Trade Tensions. On Friday, the U.S. and China exchanged tit for tat tariffs on each other's exports in equal dollar amounts. NAFTA negotiations continue to go unresolved. Trade with Europe appears to have a sloppy future. Markets have reacted to some degree, but give one the impression that decision makers do not really believe in a worst case scenario. What this does is force the little guy to defend against just that. I have given you cloud names in the past, such as Adobe (ADBE) , and Salesforce.com (CRM) . Some of the biggest cloud names are not highly exposed to revenue from China, and benefit from domestic growth. This is where I am at -- least partially hiding out.

3) Crude Pricing. The talk this week obviously circles around not just the OPEC meetings in Vienna at week's end, but also the meetings among OPEC producers and producers outside of the cartel that have been cooperating on curbs that have been in place since 2016. It's no secret that oil prices rising along with dollar valuations threaten global growth, while also injuring discretionary spending around the planet. It's also no secret that many cash-starved producers can turn profits at current market prices for oil.

Tip-Toe Through The Oil Patch

Okay gang. The United States plans to impose sanctions on Iran. Venezuela has already gone off of a cliff. Just last month, one could see that the Saudis had increased production. Now, global leaders Russia and these same Saudis will talk about lifting the lid on curbed output. There is talk of some kind of compromise. Headline risk.

The fluctuations that you currently see in this space are due to the uncertainty around these meetings. Weakness in the commodity is being felt. The energy sector has been the S&P 500's weakest not only over the past week, but over the past month as well. This, despite the sector still being the strongest since late March. Almost all of that out-performance has been in exploration. Oil services have really just performed with the broader markets.

Now, I believe I need some broad exposure to the space. The markets have obviously discounted oil services -- particularly of late, as revenue projections for one of my longs, Schlumberger (SLB) for this quarter became muddled at the Wells Fargo Energy Conference in San Francisco last week. Apparently, there will delays in drilling several projects in Saudi Arabia, Iraq and India. Still, SLB expects to mobilize some 30 rigs internationally this quarter, with an additional 25 next quarter. Fellow oil services giant Halliburton (HAL) sold off late last week, along with SLB and with the sector in general.

My thinking is that with oil prices getting somewhat wobbly due to prospects for increased global output, that there still is ongoing increased global demand. Emerging economies are likely to remain a long way from relaxing their needs for fossil fuels. At home, in the Permian, there is still a bottleneck that prevents all of the WTI produced from reaching markets. Short term, I would think oil services less susceptible to market pricing of the commodity than explorers. This morning, there seems to be some relief seen in crude pricing as talk of an OPEC compromise spreads. My thought is that at these weaker prices this may be a good time to take action in the services space.

I remain long both SLB and Halliburton. Both still trade, even with the recent slide above my basis, SLB well above my basis. Would I consider violating basis on a news week like this? I might, but not blindly, and not solely through the use of equity. 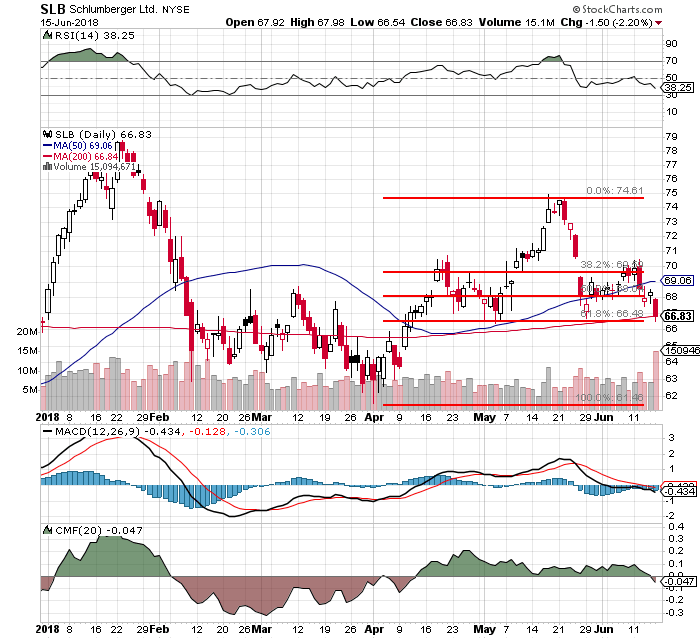 SLB has traded sideways in 2018. One quickly sees that the shares have hit a spot where both the 200-day simple moving average and a Fibonacci 61.8% re-tracement (April through May) level come into play as potential support. Failure here would allow for the stock to fall as far as the 62 level, which would be a 100% retracement. I really do not want to add equity up here to a position that look great on paper. However, I would eagerly add at that lower level.

Let's take a look at puts expiring in about a month. Keep in mind that SLB is expected to report its second quarter prior to the opening bell on July 20. On Friday, July 20 62.50s went out at $0.49. If the shares get smacked around, that would at least allow me the ability to add at 62 (ish). If the shares find support here, at least I got someone to buy my lunch. The July 20 60s went out at $0.22. By making a minimal sales of both items, the trader exposes him or herself to having to buy 200 shares at an average equity price of $61.25, less the premiums raised, which would have averaged about $0.35, so the net would be a rough $60.90.

P.S. Halliburton cracked the 200-day SMA on Friday. I need a little more of a discount there (say 44/45) in order to add. SLB is the more important of the two on my book, and thus will claim the lion's share of my focus in this space.

(Salesforce and Schlumberger are holdings in Jim Cramer's Action Alerts PLUS member club. Want to be alerted before Jim Cramer buys or sells  CRM or SLB? Learn more now.)

Get an email alert each time I write an article for Real Money. Click the "+Follow" next to my byline to this article.
TAGS: Investing | U.S. Equity | Energy | Economy | Markets | Newsletter | Oil Equipment/Services | Options | Politics | Stocks