The media landscape may have just changed again, with word that Comcast Corp. (CMCSA) has offered $65 billion in cash for assets belonging to Twenty-First Century Fox Inc. (FOXA) . The proposed deal puts Comcast in the lead for Fox's film studios and various intellectual properties, ahead of The Walt Disney Company's (DIS) previously announced $52.4 billion bid.

This latest bid for Fox's assets doesn't come as a surprise. Last month, rumors swirled that a cash bid would be contingent upon approval of the proposed AT&T Inc. (T) merger with Time Warner Inc. (TWX) . A federal judge approved that $84.5 billion transaction on June 12, setting the stage for Comcast's move. (Comcast is a holding of Jim Cramer's Action Alerts PLUS portfolio.)

Disney is on the outside looking in at the moment. The House of Mouse has worked its magic with the Star Wars and Marvel franchises and would love to own the rights to X-Men, Avatar, The X-Files, The Simpsons and the dozens of other properties that will change hands as part of this deal.

Comcast has very different motivations. The cable giant is seeking an international presence as well as content for its subscribers. The deal also would give Comcast control over a greater number of channels on its own service. In addition, it could give Comcast sufficient content to consider starting its own streaming service, while at the same time rendering Disney's previously announced streaming service less attractive.

After a long stretch of under-performance, Disney's chart is turning bullish. The stock is generating a huge double-bottom pattern (semicircles) that has been forming for over a year. The next major resistance for the stock is just above $113 (black-dotted line). Yesterday's price action formed a long green candle known as a bullish engulfing pattern (shaded yellow), which also suggests further upside.

On Wednesday, Disney closed at a three-month high. The stock is trading above both its 50-day (blue) and 200-day (red) moving averages. 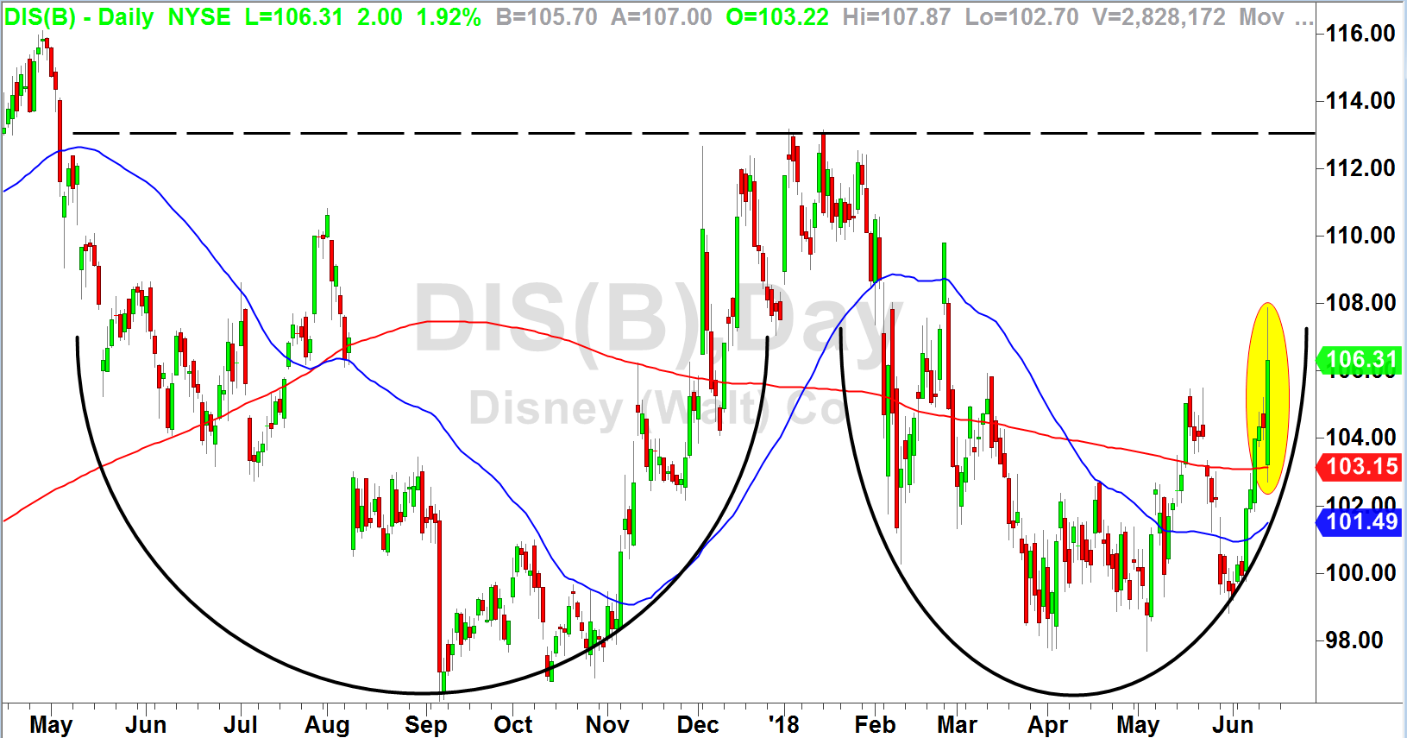 This positive price action begs the question: Is Disney rising because it's dropping out of the running for Fox, or because it's about to introduce a higher bid? Because no one knows what course of action Disney will take, the chart suggests that the stock is going higher regardless.

Here's my take: Comcast's all-cash bid is attractive. If Disney wants to continue bidding, I'd expect an improvement of 10% over Comcast's bid, or a bid of $71.5 billion. That would be about 36% higher than Disney's initial bid. Soon we'll learn if Disney is up to the task, but according to the chart, the stock is about to move higher, with or without Fox.

This column originally appeared June 14 on Real Money Pro. Click here to get more great columns like this.

Get an email alert each time I write an article for Real Money. Click the "+Follow" next to my byline to this article.
TAGS: Investing | U.S. Equity | Technology | Consumer Discretionary | Entertainment | Gaming | Mergers and Acquisitions | Stocks